Aztec Symbols, the Language of Culture

History » The Aztecs » Aztec Symbols, the Language of Culture 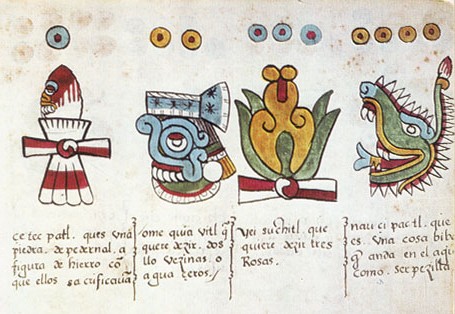 Aztec symbols were a component of material culture in which the ancient society expressed understanding of the corporeal and immaterial world. The members of that culture absorb the symbols and their meanings as they grow up. They see the symbols all around them, on the walls of their temples, in jewelry, in weaving and in their language and religion. The Aztecs also used symbols to express perceptions and experiences of reality.

The Aztecs, like the other Mesoamerican cultures surrounding them, loved symbols of their gods, animals and common items around them. Each day in the ritual 260-day calendar, for example, is represented by a number and a symbol. The tonalppohualli or sacred calendar, consists of two interlocking cycles, one of 13 days, represented by a number called a coefficient and one of 20 days represented by a day glyph or symbol. The day symbols include animals such as crocodiles, dogs or jaguars; abstract subjects such as death and motion; and natural things that the Aztecs saw around them every day like houses, reeds, water and rain. See the Ancient Scripts section on Aztecs to see good, colorful example of the day glyphs.

All Mesoamerican cultures used body paint, especially warriors going into battle. Different ranks of warriors wore specific colors and used those same colors in painting their bodies. The most prestigious warrior society, the Shorn Ones, shaved their heads and painted half their head blue and half yellow. Other warriors striped their faces with black and other colors. Aztecs also decorated their bodies permanently in the form of piercing and tattoos, although there is not as much evidence for Aztec tattooing as for the cultures around them.

The Aztecs centered their lives on their religion. For that reason, many statues and carvings exist of the Aztec gods, as hideous as they may be to modern eyes. Symbols of the sun, the eagle, the feathered serpent and cactus were used in the Aztec writing system, in dates and time and in titles and names. The magnificent Sun or Calendar Stone contains both the 365 day solar calendar and the sacred 260-day tonalpohualli, all of which are represented by the rich symbolism of the Aztec culture.

Most Aztec symbols had layers of meaning. A butterfly symbol, for instance, represented transformation while frogs symbolized joy. When symbols were combined as in Aztec pictograms, entire stories could be told through the multiple layers of an Aztec symbol’s meaning. The day signs and coefficients corresponded to one of the Aztec gods, which means the 260-day calendar could be used for divination. An order of the Aztec priesthood were diviners. When a child was born, they were called to find a name for the baby based on the day of the birth and the god corresponding to that day. From these symbols, it was believed these priests could tell the baby’s fortune and fate.

Today, because of the growing interest in body art, more people are learning about Aztec symbols and designs.