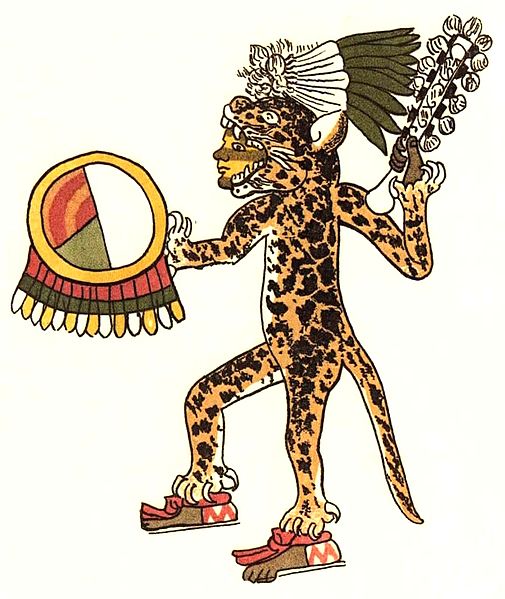 The Aztec warrior was highly honored in society if he was successful. Success depended on bravery in battle, tactical skill, heroic deeds and most of all, in capturing enemy warriors. Since every boy and man received military training, all were called for battle when war was in the offing. Both commoners and nobles who captured enemy warriors moved up in military rank or became members of military orders. Many nobles joined the army professionally and functioned as the command core of the army.

While the Aztec economy depended on trade, tribute and agriculture, the real business of the empire was war. Through war, the Aztec Empire gained tribute from conquered enemies. People captured during war became slaves or sacrifices in the Aztec’s religious ceremonies. Expanding the empire through further conquests strengthened the empire and brought more riches in tribute. For this reason, the emperor rewarded successful warriors of both classes with honors, the right to wear certain garments in distinctive colors, nobility for the commoners and higher status for nobles and land. Every Aztec warrior could, if he captured enemy warriors, advance far in society.

Rank in the military required bravery and skill on the battlefield and capture of enemy soldiers. With each rank, came special clothing and weapons from the emperor, which conveyed high honor. Warrior clothing, costumes and weaponry was instantly recognizable in Aztec society.

Eagle and Jaguar warriors were the two main military societies, the highest rank open to commoners. In battle they carried atlatls, bows, spears and daggers. They received special battle costumes, representing eagles and jaguars with feathers and jaguar pelts. They became full-time warriors and commanders in the army. Great physical strength, battlefield bravery and captured enemy soldiers were necessary to obtain this rank.

Commoners who reached the vaunted Eagle or Jaguar rank were awarded the rank of noble along with certain privileges: they were given land, could drink alcohol (pulque), wear expensive jewelry denied to commoners, were asked to dine at the palace and could keep concubines. They also wore their hair tied with a red cord with green and blue feathers. Eagle and jaguar knights traveled with the pochteca, protecting them, and guarded their city. While these two ranks were equal, the Eagle knights worshipped Huitzilopochtli, the war god and the Jaguars worshipped Tezcatlipocha.

Otomies and the Shorn Ones

The two highest military societies were the Otomies and the Shorn Ones. Otomies took their name from fierce tribe of fighters. The Shorn Ones was the most prestigious rank. They shaved their heads except for a long braid of hair on the left side and wore yellow tlahuiztli. These two ranks were the shock troops of the empire, the special forces of the Aztec army, and were open only to the nobility. These warriors were greatly feared and went first into battle.