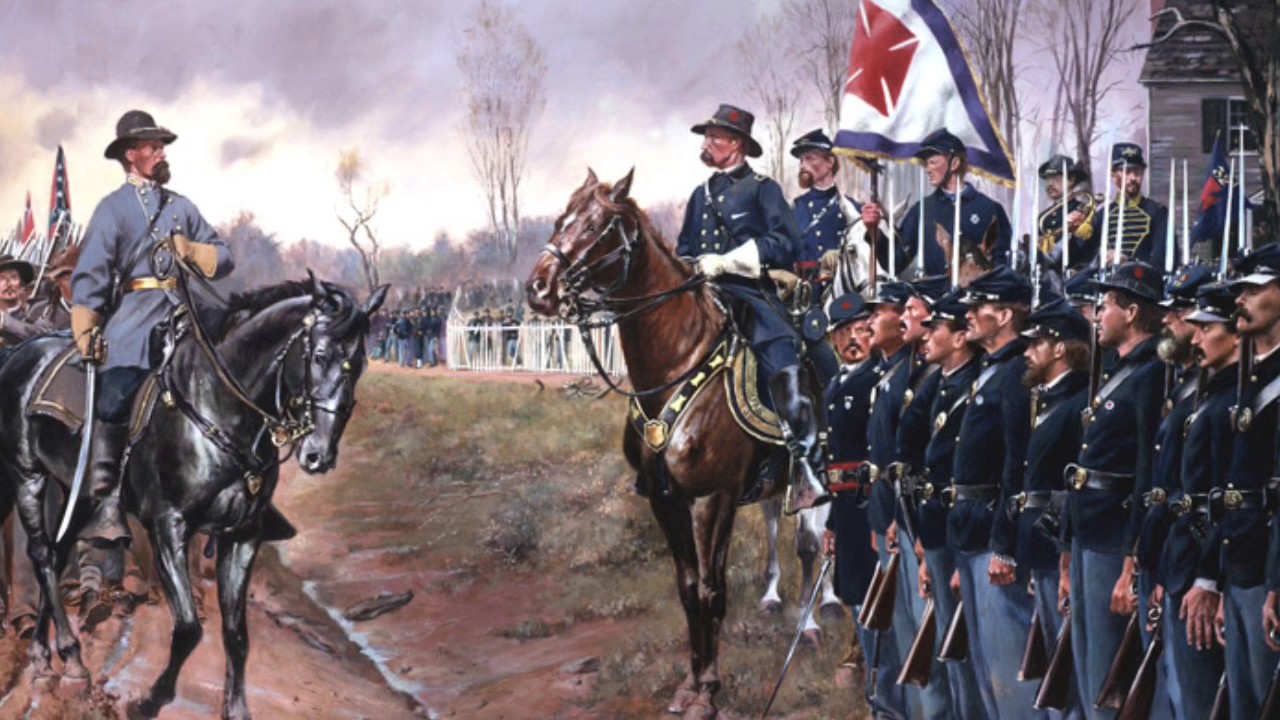 In background of Battle of Appomattox, Grant gave up trying to get around Lee to Richmond, and instead opted to lay siege to Petersburg and cut Richmond’s supply lines to the south. Lee had foreseen this probability, but was powerless to prevent it. He also knew what it meant for the Confederacy. Lee confessed to Confederate general Jubal A. Early that if Grant were to cross the James River and attack Petersburg, “It will become a siege, and then it will be a mere question of time.”9

A siege meant that Grant’s war of attrition would be ratcheted up a notch, but Lee held Grant at Petersburg for ten months, during which time the Union general could spare no men for an attack on Richmond. If this delaying action could be counted a victory, it was certainly a Pyrrhic one, because it was also during these ten months of successful defense that Lee witnessed the rest of the Confederacy wither, put to the torch by Sherman’s men who marched from Atlanta to Savannah to South Carolina to their last major engagement at Bentonville, North Carolina (19-21 March 1865) where Sherman defeated the everretreating Joseph E. Johnston.

In Tennessee, Confederate General John Bell Hood fought his army to the point of effective annihilation between the battles of Franklin (30 November 1864) and Nashville (15-16 December 1864).

In the breadbasket of Virginia, Union General Phil Sheridan executed Grant’s orders to reduce “the Shenandoah Valley [into] a barren waste . . . so that crows flying over it for the balance of this season will have to carry their provender with them.” By the time Sheridan was done, the fertile Valley’s wheat, flour, hay, cattle, sheep, pigs, and chickens were either destroyed or in Federal hands; the farmers left with nothing but burnt offerings, not even their tools were spared.

That meant that the Confederacy’s hopes—such as they were—rested entirely on General Robert E. Lee and the Army of Northern Virginia.

The Campaign of Battle of Appomattox and Petersburg :

Grant’s initial assault on the defenses around Petersburg in June 1864 led to another bruising engagement, where the Union troops suffered so grievously, despite their overwhelming numbers, that the Union’s offensive had to be cut short, General Meade saying “the moral condition of the army” was shattered. 11 Indeed, in the first two months of the siege, the Confederates, somewhat to their surprise, collected 8,000 Union prisoners.

As the siege wore on, the Federal artillery shelling the city, Lee offered his wife a humorous assessment of the situation. “Grant,” he wrote, “seems so pleased with his present position that I fear he will never move again.”12 Grant continued to press and probe Lee’s army. At its greatest extent, Lee’s line of trenches stretched for nearly fifty-five miles.

In the most spectacular incident of the siege, blue-clad Pennsylvania coal miners burrowed beneath the Confederate lines, packed the tunnel with 8,000 pounds of explosives, and on 30 July 1864, detonated it. The blast tore a hole in the Confederate line, the earth collapsing into an enormous crater. The Federals poured into the breach. But the Confederates reformed around the lip of the crater, threw back the Yankees in hand-tohand combat and opened fire on those who had charged into the pit.

The Battle of the Crater cost the Union another 4,000 casualties to fewer than 1,300 Confederates. Worse than that, from the Union perspective, was the speed with which the Confederates restored their lines. There was no chance to follow up with another attack on the breach. General Grant was appalled. “It was the saddest affair I have witnessed in the war. Such an opportunity for carrying fortifications I have never seen and do not expect again to have.”13

But Grant kept his men in place, and the siege dragged on through the winter and into the spring of 1865. Lee knew that his army could not hold the line at Petersburg indefinitely. Lee finally convinced President Davis that Petersburg and Richmond had to be abandoned. Lee’s army—about 35,000 men, roughly one quarter of Grant’s strength—had to be freed to maneuver, to find forage to feed itself, and to attempt to unite with Joseph E. Johnston’s fragment of an army in North Carolina.

Lee held the line protecting Petersburg and Richmond as long as he could, keeping the Federals back with occasional offensive maneuvers. But Grant knew that Lee’s lines were paper thin, and on 2 April 1865, the Federals punched through. Lee could only stall him now. Lee dictated a dispatch to the secretary of war. “I see no prospect of doing more than holding our position here till night. I am not certain that I can do that. If I can I shall withdraw north of the Appomattox, and, if possible, it will be better to withdraw the whole line tonight from the James River”. Petersburg and Richmond were lost in the battle of Appomattox.

The Confederate army—and Lee in his headquarters—were now under continuous bombardment. Lee and his staff mounted their horses, the fire intensifying. As they rode away, their abandoned headquarters exploded under a rain of Union shells, the artillery bursts chasing after them.

The Army of Northern Virginia that left Petersburg numbered no more than 30,000 men. Lee marched them to Amelia Court House, where he expected to find supplies. Instead, they found nothing but inedible cannon balls. The food his men needed was now long marches away. Lee sent a message to Danville, the nearest of the supply dumps on his route to North Carolina, ordering that rations be sent on to the railroad station at Jetersville, Virginia, eight miles south of Amelia Court House. But Federal cavalry under Phil Sheridan were already riding to seize Jetersville; Grant was in pursuit of Lee; and Lee’s army, while trying to fight a campaign of maneuver, were caught in occasional bloody engagements, like Sayler’s Creek (6 April 1865), that depleted the Confederate forces.

The end was apparent on 9 April 1865. It was then that General John B. Gordon fought the last engagement of the Army of Northern Virginia near Appomattox Court House in battle of Appomattox. “Tell General Lee,” Gordon ordered, “I have fought my corps to a frazzle, and I fear I can do nothing unless I am heavily supported by General Longstreet’s corps.” General Longstreet anchored Lee’s other flank; he could not be moved short of sacrificing the entire army.

Lee had to surrender. And so it was done. On Palm Sunday, 9 April 1865, General Robert E. Lee rode to the Appomattox house of Wilmer McLean, where he surrendered to Ulysses S. Grant. After the arrangements were completed, Grant returned to his headquarters and informed his staff: “The war is over. The rebels are our countrymen again.”

What You Need to Know About of Battle of Appomattox:

Lee was noble in defeat (and had dismissed any talk of fighting on in a guerilla campaign), and Grant was magnanimous in victory. Thereafter, Lee allowed no one in his presence to criticize Grant. With four years of savage fighting behind them, nothing so became the combatants—and their respective countries—as the manner in which they ended the battle of Appomattox in April 1865.