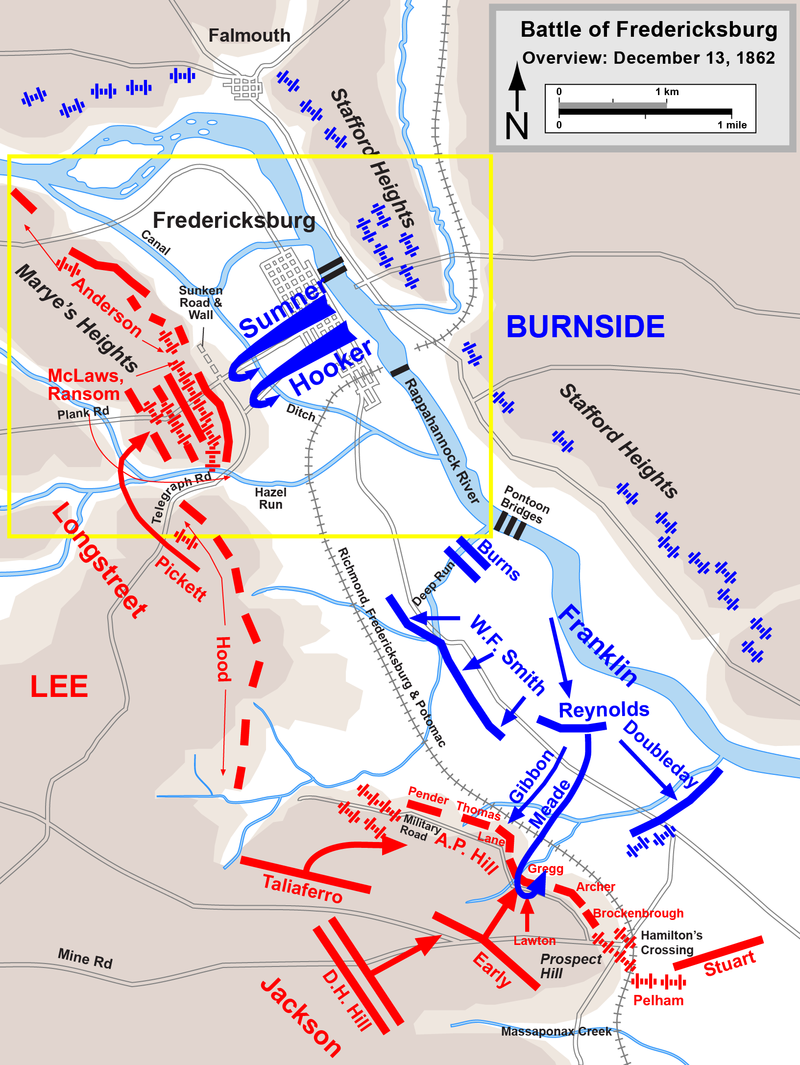 The Background of Battle of  Fredericksburg:

History of Battle of Fredericksburg -President Lincoln, frustrated at this litany of defeat in the Eastern theater, now took a more active role in directing Union strategy, along with his Secretary of War Edwin Stanton. With General Ambrose Burnside they plotted a straight course from Washington to Fredericksburg to Richmond. The only thing that stood in their way was the army of General Robert E. Lee.

Lee prepared defensive positions on the hills to the east of the city, in a seven-mile line facing the Rappahannock River. He relied on the high ground and carefully positioned artillery, rather than trench works; and, as usual, he was badly outnumbered. He had about 78,000 men to Burnside’s 120,000.

Lee’s frontline defenders were Mississippi and Florida riflemen who sniped at the Federals as they bombarded Fredericksburg. The Federals then crossed the Rappahannock River and moved into the city. Lee’s Mississippians, under the command of General William Barksdale, were gallant in slowing the Union advance, but by evening the Mississippians and Floridians were withdrawn (some of the Mississippians had to be removed forcibly, even under arrest, because they were reluctant to yield the ground), and the Federals were, for the moment, uncontested occupiers of Fredericksburg, looting and vandalizing the houses. They would receive a terrible punishment the next day.

The morning opened with a fog so thick that cavalry commander J. E. B. Stuart and an aggressive Stonewall Jackson thought the Confederates should launch a surprise attack under its cover. But Lee demurred. Then the Union guns belched smoke and thunder, trying, largely unsuccessfully, to find the Confederates. As the fog slowly lifted, the artillery battle became a duel—a duel between an entire line of Union cannon and a single Confederate artillery officer, Captain John Pelham, with two guns, one of which was quickly disabled. J. E. B. Stuart sent orders for Pelham to retire, but like the Mississippi sharpshooters before him, Pelham had to be compelled with three sets of orders, and then withdrew only after he ran out of ammunition. Lee called him “the Gallant Pelham” and said of his performance at Battle of Fredericksburg: “It is glorious to see such courage in one so young.”

While Jackson had some hard fighting on Lee’s right, Burnside massed the bulk of his forces for an almost obsessive assault on Lee’s left at Marye’s Heights. Lee saw the Federals were taking a horrible beating, but warned Longstreet that the Union concentration was so heavy that it might break through. Longstreet, who preferred to fight on the defensive, was phlegmatic: “General, if you put every man now on the other side of the Potomac on that field to approach me over the same line, and give me plenty of ammunition, I will kill them all before they reach my line.” The Union soldiers came on, and were shot down, all day.

As night fell, Lee finally ordered his men to dig in. Burnside talked about launching another attack, but his subordinate officers talked him out of it. They had had enough. Federal casualties for the battle of Fredericksburg were more than 12,000 men; Confederate casualties were more than 5,000. A month later, Burnside tried to regain the offensive with what became known as “the Mud March,” which went nowhere. He offered to resign and was reassigned to Ohio.

What You Need to Know About Battle of  Fredericksburg:

Fredericksburg helped to build the reputation of the apparently invincible Robert E. Lee and the Army of Northern Virginia that repeatedly thwarted Union generals, their massive armies, and their plentiful supplies. It also highlighted Lee’s awareness of the cost of war. Lee had witnessed the women, children, and old men of Fredericksburg evacuate the city, trudging through the snow and bitter cold. When the Federals bombarded the city, he said, “These people delight to destroy the weak and those who can make no defense; it just suits them.”16 It was also at Fredericksburg that Lee, overlooking the slaughter on Marye’s Heights said, memorably, “It is well that war is so terrible—we should grow too fond of it.”

Following McClellan’s disastrous Union loss at Antietam, Lincoln replaced him with Ambrose Burnside, who planned to march to the city of Fredericksburg, getting there before Lee and possibly marching all the way to Richmond. But once they confronted the Confederacy at the battle of Fredericksburg the Federals made 14 total charges that were all repulsed. One Federal general wrote “It was a great slaughter pen.  They may as well have tried to take Hell.”

Scroll down to the bottom of this post to see another map related to this battle.

The Battle of Fredericksburg 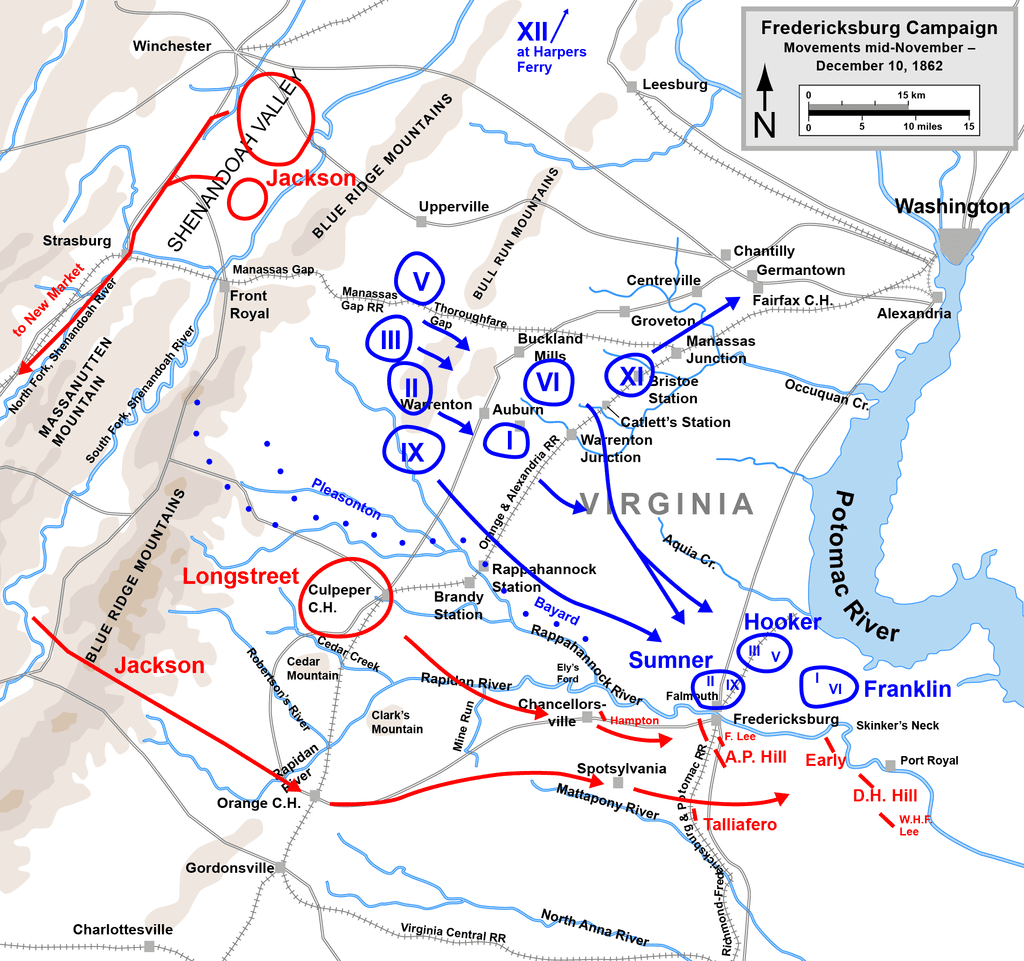