The “Carpetbagger” Era: Post-Civil War Tensions Between North and South 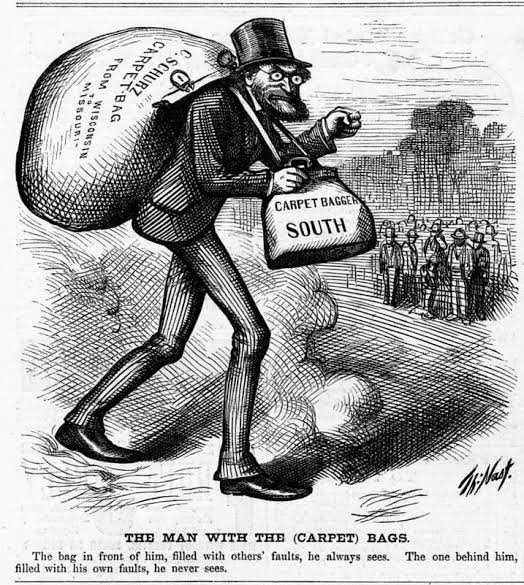 A “carpetbagger” was a derogatory term applied by former Confederates to any person from the Northern United States who came to the Southern states after the American Civil War during the period dubbed Radical Reconstruction.

A great many contemporary observers believed that the real purpose behind Radical Reconstruction was to secure the domination of the Republican Party in national political life through the newly freed population in the South. The Republicans took for granted that the freed slaves would vote Republican. Connecticut senator James Dixon, for example, argued that “the purpose of the radicals” was “the saving of the Republican Party rather than the restoration of the Union.” This was also the view of General Sherman, who was convinced that “the whole idea of giving votes to the negroes” was “to create just that many votes to be used by others for political uses.” He expressed his displeasure with a plan “whereby politicians may manufacture just so much more pliable electioneering material.” And indeed, Radical Republican Thaddeus Stevens conceded that the votes of the freed slaves were necessary in order to bring about “perpetual ascendancy to the Party of the Union”—that is, the Republican Party.

Henry Ward Beecher, too, was concerned about the Radicals. Beecher, the brother of Harriet Beecher Stowe (author of Uncle Tom’s Cabin), had been a fierce opponent of slavery, and had helped to arm opponents of slavery in Kansas. Yet even he warned his countrymen of the party spirit that animated the Radicals:

It is said that, if admitted to Congress, the Southern Senators and Representatives will coalesce with Northern democrats and rule the country. Is this nation, then, to remain dismembered, to serve the ends of parties? Have we learned no wisdom by the history of the past ten years, in which just this course of sacrificing the nation to the exigencies of parties plunged us into rebellion and war?

Otto Scott, a twentieth-century Northern writer, observed that Radical vindictiveness following the war, including the Radical insistence that the South was out of the Union and not entitled to congressional representation, strongly suggested that the North’s motives in going to war had not been so pure after all: “To win that war, and then to refuse to allow the South to remain in the Union was not only logically perverse, but a tacit admission that the war had not been about slavery, but—as in all and every war—power.”

In 1866 President Johnson vetoed the Freedmen’s Bureau Bill and the Civil Rights Act of 1866. His veto messages contained detailed critiques of what he considered the constitutionally dubious aspects of the legislation. As Ludwell Johnson explains, “The Freedmen’s Bureau and Civil Rights bills proposed to establish for an indefinite time an extensive, extra-constitutional system of police and judicature with the opportunity, as Johnson correctly pointed out, for enormous abuses of power.” Moreover, Johnson considered it neither fair nor wise to proceed on matters of such gravity while eleven states were still deprived of their representation in Congress.