History » Cold War » The Origins of the Cold War Timeline 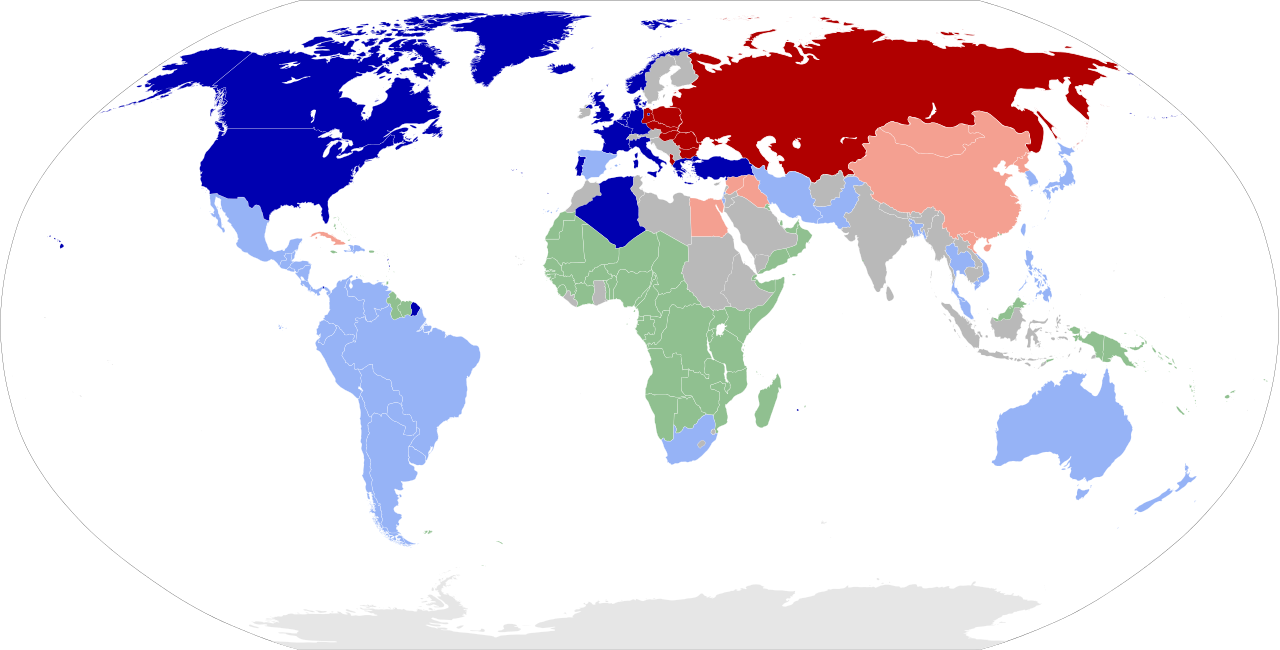 The following Cold War timeline is an excerpt from Lee Edwards and Elizabeth Edwards Spalding’s book A Brief History of the Cold War It is available to order now at Amazon and Barnes & Noble.

Led by Vladimir Lenin, the Communist Revolution in Russia puts the Bolsheviks in power.

The Russian Civil War ends with the establishment of the Union of Soviet Socialist Republics; Joseph Stalin is appointed general secretary of the Communist Party.

Lenin dies after a long illness. Stalin consolidates all political power, ruling the Soviet Union with an iron hand until his death in 1953.

The Molotov-Ribbentrop Pact, also known as the Nazi-Soviet Pact, splits Poland and the rest of Eastern Europe between the USSR and Nazi Germany.

Yalta Conference. Roosevelt, Churchill, and Stalin, meeting in the Crimea, agree on free and open elections in Eastern Europe and divide Germany into four occupation zones.

V-J Day. Allies celebrate Japan’s unconditional surrender. World War II ends with Soviets retaining most of the territories they held in 1939 and areas occupied during the war, including parts of Austria, Germany, and Korea. Communists formally control governments in Albania, Bulgaria, and Romania.

Stalin announces that conflicts between the West and USSR are inevitable, charges that capitalism caused World War II, and calls for an industrial build-up in Russia.

After months of diplomatic protests by the United States, Great Britain, and the United Nations, the Soviets withdraw from Iran. Truman orders preparation of task force to send to the eastern Mediterranean.

The USSR pressures Turkey to agree to joint control of the Turkish Straits, beginning naval maneuvers in the Black Sea and dispatching troops to the Balkans. In response to a plea from the Turkish government, Truman orders a naval task force to the area and affirms U.S. support of Turkey.

The British officially inform the United States they can no longer guarantee the security of Greece and Turkey.

Truman Doctrine. Announcing aid to Greece and Turkey, Truman proposes a policy of supporting free people against anti-democratic forces from within or outside national borders.

“Sources of Soviet Conduct” by “X” (George Kennan) published in Foreign Affairs, advocating policy of containment of the Soviet Union.

National Security Act signed into law, reorganizing the U.S. military under the Department of Defense and establishing the Joint Chiefs of Staff, the National Security Council, and the CIA.

Harry S. Truman is sworn in again as president.

The Federal Republic of Germany is established in West Germany; the Soviets declare their zone of East Germany to be the German Democratic Republic.

Mao Zedong declares the birth of the People’s Republic of China after a long civil war between the communists and Chiang Kaishek’s Nationalists; Chiang and other anticommunist Chinese move to the island of Formosa (Taiwan) and set up the government of the Republic of China.

The USSR and the People’s Republic of China sign a pact of mutual defense.

Truman and the United Nations call for a defense of South Korea. United States sends forces (eventually joined by forces from sixteen other countries) led by General MacArthur to Korea.

Truman approves NSC 68, the outline of a broad defense and foreign policy strategy to counter and challenge the Soviet Union.

Julius and Ethel Rosenberg are convicted of espionage for their role in giving atomic secrets to the USSR during and after World War II.

The European Recovery Program ends, with European industrial output substantially higher than in 1948.

Dwight D. Eisenhower is sworn in as president.

Armistice ends the fighting in Korea, but no peace treaty is signed.

Nikita Khrushchev becomes head of the Soviet Communist Party; his main rival is executed in December.

The Baghdad Pact is formed to resist communist aggression in the Middle East, with member states Iran, Iraq, Pakistan, Turkey, and the United Kingdom. The United States becomes an associate member in 1959, when the pact is renamed CENTO after Iraq’s withdrawal.

Anticommunist protests in Poznan, Poland, are crushed by communist Polish and Soviet forces.

First American U-2 reconnaissance flights over the Soviet Union.

During the Suez Canal Crisis, Eisenhower pressures Britain and France to accept a UN ceasefire in order to prevent the USSR from assisting Gamal Nasser’s Egypt and expanding Soviet presence in the Middle East.

Hungarian Revolution begins, but after two weeks of freedom, students and workers protesting Soviet occupation are violently put down and communist rule is reestablished.

Fidel Castro arrives in Cuba, where he will lead a revolution and establish a communist state.

Spuknik I satellite launched by the Soviet Union.

Mao begins the Great Leap Forward, a collectivization of Chinese agriculture that will cause the deaths of tens of millions.

The second Berlin crisis begins, with Khrushchev demanding that the West leave Berlin.

The “Kitchen Debate,” an exchange between Khrushchev and Vice President Richard Nixon about the relative levels of abundance produced by capitalism and socialism, takes place at an American cultural exhibition in Moscow. The exchange is captured on videotape and broadcast in the United States and the USSR.

Khrushchev is the first Soviet premier to visit the United States.

Khrushchev announces that the USSR has shot down an American U-2 plane and captured its pilot. United States suspends U-2 flights.

Diplomatic relations between the United States and Cuba end.

John F. Kennedy is sworn in as president.

Bay of Pigs invasion. Cuban exiles organized by the CIA land in Cuba, seeking to spark an uprising against Castro’s regime. President Kennedy withholds vital air and naval support, and the mission fails.

Berlin border is closed by East Germany, followed by construction of the Berlin Wall dividing East and West Berlin. The wall cuts off the flow of thousands of East Germans seeking to migrate to the West.

USSR detonates the most powerful thermonuclear weapon ever tested, with an explosive yield of some fifty megatons.

Publication of Aleksandr Solzhenitsyn’s One Day in the Life of Ivan Denisovich, based on the author’s experiences as a prisoner in the Gulag.

Hotline enabling direct communication between the White House and the Kremlin is opened.

Ngo Dinh Diem, president of Vietnam, is overthrown and assassinated.

Khrushchev is replaced by Leonid Brezhnev as general secretary of the Communist Party of the Soviet Union.

Lyndon B. Johnson is elected president.

The Cultural Revolution begins in the PRC.

Thousands of demonstrators picket the Pentagon in protest against U.S. involvement in Vietnam.

Richard Nixon is sworn in as president.

Clash between troops of Soviet Union and People’s Republic of China along their joint border.

President Nixon begins “Vietnamization” of the war in Indochina and announces gradual withdrawal of U.S. troops from Vietnam.

Nixon Doctrine: A pledge to honor treaties, provide a nuclear shield to allies, and provide arms and economic aid to other nations but not U.S. troops.

Nonaggression pact between West Germany and the Soviet Union signed.

India and the USSR sign a twenty-year friendship pact.

Nixon becomes the first U.S. president to visit the People’s Republic of China.

Break-in at the Democratic National Committee headquarters in Washington, beginning the Watergate scandal.

After publication of The Gulag Archipelago in the West, Solzhenitsyn is arrested and exiled from the USSR.

Richard Nixon resigns the presidency in the face of certain impeachment and conviction and is succeeded by Gerald R. Ford.

Cambodia falls to communist Khmer Rouge, who over the next two years engineer the death of one-fifth of the Cambodian population.

Saigon falls to the North Vietnamese after U.S. Congress refuses further aid, ending the Vietnam War in a communist victory.

Khmer Rouge seizes the American merchant ship Mayaguez in disputed waters off Cambodia. The ship is recaptured with heavy U.S. casualties in the last official engagement of the Vietnam War.

Charter 77 is signed by Czechoslovakian dissidents, including Václav Havel.

Jimmy Carter is sworn in as president.

After years of protesting Soviet repression, especially of Jews, Natan Sharansky is found guilty at a show trial. He will spend years in prisons in Moscow and the Perm Gulag in Siberia.

Soviets continue arms buildup in Eastern Europe, including deployment of SS-20 missiles that can reach targets in Western Europe.

NATO announces dual-track decision to deploy long-range theater nuclear forces in Western Europe and offers to negotiate with the Soviets on nuclear weapons in Europe.

The Soviet Union responds to a coup in Afghanistan by invading and establishing a pro-Soviet government, becoming entangled in a decade-long civil war.

Russian dissident and Nobel laureate Andrei Sakharov protests the Soviet invasion of Afghanistan and is exiled to Gorki, a city closed to foreigners.

Carter Doctrine: the United States will respond with force if any country attempts to control the Persian Gulf and threaten U.S. interests there.

After campaigning on a pledge to restore U.S. military superiority, Ronald Reagan is elected president.

Addressing the British Parliament, Reagan predicts that communism is headed for “ash-heap of history.”

Leonid Brezhnev dies and is succeeded by Yuri Andropov as head of USSR.

Soviets shoot down civilian Korean Air Lines Flight 007, flying from Anchorage to Seoul, purportedly in Soviet airspace, killing all 269 aboard, including a member of Congress.

After the deaths of Yuri Andropov and Konstantin Chernenko, Mikhail Gorbachev becomes general secretary of the Communist Party and leader of the Soviet Union.

Reagan and Gorbachev meet for the first time at a summit in Geneva and agree to hold more summits.

Reagan and Gorbachev agree at Reykjavik to remove all intermediate nuclear missiles from Europe; after offering to share nuclear technology, Reagan refuses to give up SDI, which leads to end of the summit.

Speaking in Berlin before the Brandenburg Gate Reagan challenges Gorbachev to “tear down this wall!”

Gorbachev and Reagan sign the INF Treaty, eliminating an entire class of nuclear weapons for the first time.

Speaking at Moscow State University, Reagan says that “it’s time” for a new world of friendship, peace, and freedom.

Gorbachev renounces the Brezhnev Doctrine, saying the USSR will no longer interfere militarily in Eastern Europe.

George H. W. Bush is sworn in as president.

In the first partially free elections in the Soviet Union, non-Communists are elected to the Congress of People’s Deputies.

Hungary begins to remove the fence separating it from Austria.

Imre Nagy, the leader of the 1956 Hungarian Revolution, is given a hero’s burial in Budapest.

Communist Party loses its monopoly of power in the Soviet Union.

Conventional Armed Forces in Europe Treaty and the Charter of Paris for a New Europe are signed, bringing the Cold War closer to an end; the USSR, however, continues to exist.

Hard-liners in the Politburo attempt a coup, placing Gorbachev under house arrest. Boris Yeltsin rallies the people against the Gang of Eight and the coup collapses.

Gorbachev resigns as president of Soviet Union after Russian president Yeltsin bans the Communist Party and assumes all the powers of the old regime. The USSR dissolves, and the Cold War officially ends.

This Cold War timeline is an excerpt from Lee Edwards and Elizabeth Edwards Spalding’s book A Brief History of the Cold War. It is available to order now at Amazon and Barnes & Noble.