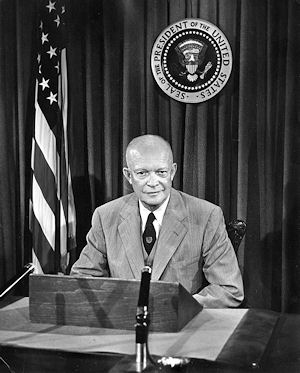 The following Eisenhower presidency summary is an excerpt from Mel Ayton’s Hunting the President: Threats, Plots, and Assassination Attempts—From FDR to Obama. It is available for order now from Amazon and Barnes & Noble.

Dwight D. Eisenhower was born in Denison, Texas, in 1890 and was brought up in Abilene, Kansas. In his early army career, after graduating from West Point, he excelled at staff assignments, serving under Generals John J. Pershing, Douglas MacArthur, and Walter Krueger. After Pearl Harbor, General George

C. Marshall called him to Washington for a war plans assignment. He commanded the Allied Forces landing in North Africa in November 1942, and he was the supreme commander of the troops invading France on D-Day, June 1944.

After the war, he was named president of Columbia University, and in 1951 he became the first supreme commander of NATO.

Eisenhower turned down Republican and Democrat requests, including from President Truman, that he run for president, until 1952, when he ran and won as a Republican. He was reelected in 1956. Both times he defeated Democratic candidate Adlai Stevenson by a substantial margin.

As president, Eisenhower ended the war in Korea and at home oversaw a decade of rising prosperity. Historian Stephen Ambrose thought Eisenhower was the best president of the twentieth century. Eisenhower “thought things through,” Ambrose wrote. “He had a lot of shortcomings and weaknesses, but . . . he was the smartest man I’ve ever met and the one with the highest power of concentration. . . . He was the most naturally generous man.” Eisenhower, he noted, brought the American people through the “eight toughest years of the Cold War without losing a single soldier, and without giving up an inch of territory . . . he got us through the decade. I don’t know if anybody else could have. I know that he did.”

Historians and the media initially dismissed Eisenhower as a “bumbling lightweight,” but behind the bland smile and apparent simplemindedness, historian Evan Thomas argues, he was a brilliant political tactician, a “master of calculated duplicity,” a patient, subtle leader with quiet moral courage.

This Eisenhower presidency summary is from Mel Ayton’s Hunting the President: Threats, Plots, and Assassination Attempts—From FDR to Obama.. Please use this data for any reference citations. To order this book, please visit its online sales page at Amazon or Barnes & Noble.