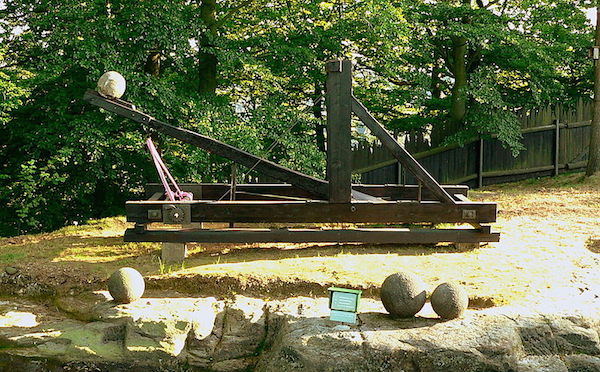 The Neo-Assyrian Empire used earthen ramps, siege towers and battering rams in sieges; the Greeks and Alexander the Great created destructive new engines known as artillery to further their sieges, and the Romans used every technique to perfection. That is to say, the Romans were not inventors, but they were superb engineers and disciplined, tough soldiers who fought against great odds and won, repeatedly.

Julius Caesar and the Siege of Alesia, 52 B.C.

The one main advancement the Romans brought to siege tactics came from Julius Caesar’s siege of the Gallic stronghold of Alesia. Arriving at Alesia, Caesar began the siege by directing his troops to build a fortified camp and then a wall ten miles long to circumnavigate the city. This wall is called a circumvallation. It would keep the Alesians in and cut off any supplies from the outside. The greatest threat to any besieging army was attack by allies from the outside.

Usually, when allies of a city attacked, the besiegers would have to turn and fight the allies while trying to protect their back from the city. Or they might have to give up the siege altogether, depending on the strength of the allies.

Caesar didn’t do either of these; instead he had his army build another wall to surround his army outside the first wall, which invested the fortress of Alesia. The second wall—Caesar’s great innovation in siege warfare—was called a contravallation.

When the Gallic army allied to Alesia arrived, they discovered they had to besiege the besiegers, Caesar’s army. The Romans successfully withstood the siege from the Gallic army. Alesia, bereft of food and supplies, began to starve. Finally, they surrendered.

While Roman engineers redesigned and perfected many of the Greek siege engines, they invented only one—the onager, a torsion-driven ballista with either a sling or a bucket that could hold heavy rocks for blasting away at city walls or gates. What drove this Roman innovation was the need for anti-fortification artillery.

Most traditional siege artillery was used to kill or disable defenders, although Roman besiegers also used the engines against stone walls or wooden gates. However, prior to the onager, most siege artillery wasn’t effective in knocking down walls. The most besiegers could hope for was to damage a wall or create a weakened spot that could then be breached by attackers.

The onager—named for the strong kick of a jackass as the onager also bucked and recoiled—was crafted from its immediate predecessor, the ballista. Ballistae were giant crossbows that fired javelins or large arrows at defenders. Onagers were powered by tightly twisted animal sinew or rope wound up like a spring. When the spring was released, the sinews snapped back, launching projectiles up to 500 yards, which allowed besiegers to stay back out of range of defenders’ arrows or stones.

Onagers were more powerful than ballistas, although slightly less accurate; they had enough power to damage walls. As the first anti-fortification artillery, onager catapults were prized by the Romans and used often in sieges. Onagers could throw heavy stones up to 200 to 300 pounds from a greater distance than anything else in the siege armory. Onagers also used clay balls filled with combustibles as ammunition in attempts to set fire to enemy roofs, towers and wooden gates.

The onager and its brother catapults wouldn’t be rivalled in siege warfare until gunpowder was introduced in the Middle Ages. With onagers, Romans could attack cities and fortifications from a 500 yard range and still crush walls. With one masterful tactical move and one powerful invention, the Romans changed the face of siege warfare.