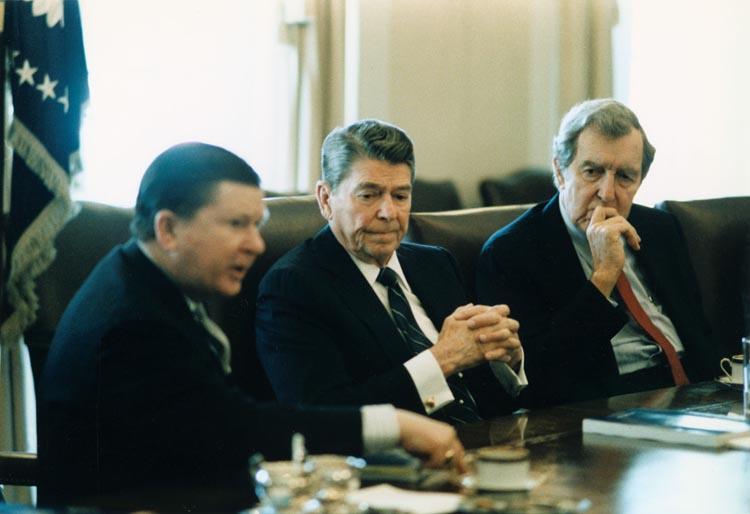 The following article on the Iran-Contra Affair is an excerpt from Lee Edwards and Elizabeth Edwards Spalding’s book A Brief History of the Cold War It is available to order now at Amazon and Barnes & Noble.

The Iran-Contra affair, often highlighted by historians in their account of the Reagan years, had its origins in two quite different impulses of the president. The first was humanitarian—to free a handful of American hostages held by terrorists in Lebanon. The second was strategic—to support the anticommunist resistance in Nicaragua. The affair also underscored the ever increasing influence of the National Security Council on the conduct of U.S. foreign policy.

Frustrated NSC staffers asked themselves how the United States could negotiate with terrorists when such talks contradicted the administration’s stated policy of not dealing with terrorists or a state like Iran that supported terrorist groups. Both Secretary of State George Shultz and Secretary of Defense Caspar Weinberger adamantly opposed negotiations. But NSC staffers believed that “moderate” elements in Iran could facilitate the release of the hostages. Reagan wrote in his memoir that “it was the president’s DUTY to get them home.”

And so at the end of 1985, Reagan decided to proceed with an Iranian initiative that involved the exchange of arms for the release of Americans. A year later, the administration was trying to contain a political crisis that some critics equated with Nixon’s Watergate. In March 1987, the president conceded reluctantly in a nationally televised address that he had tried to trade arms for hostages. “I let my personal concern for the hostages spill over into the geopolitical strategy of reaching out to Iran.” The public made clear its rejection of the deal: Reagan’s approval rating dropped twenty-one points in one month, to 46 percent.

The “Contra” half of the scandal began in the fall of 1982 when Congress passed the first Boland amendment, prohibiting the expenditure of funds to “overthrow” the government of Nicaragua. Arguing that the Contras did not intend to overthrow the government, the administration continued to fund the rebels until December 1984, when Congress denied any direct or indirect support by any U.S. intelligence agency to the Contras. At this point, the pro-Contra effort was shifted from the CIA to the NSC, which the administration contended was not an “intelligence” agency, under the direction of John Poindexter and his aide Oliver North.

Apparently with the approval of CIA Director William Casey, North diverted profits from arms sales to the Contras. Asked by Reagan to investigate the matter, Attorney General Edwin Meese III called the diversion of funds “a tremendous error that should never have been allowed to happen.” North, Poindexter, and others were indicted and convicted on charges stemming from Iran-Contra. But unlike Nixon, Reagan did not try to cover up the affair. Iran-Contra was concerned with public policy; Watergate was always about politics. Reagan approved arms for hostages to save American lives; Nixon tried to contain Watergate to save himself.

In November 1987, a select committee of the House and Senate concluded that the president had been shielded from knowledge and had been unaware of the funds diversion. The Republican minority said that the mistakes of the Iran-Contra affair had been “mistakes in judgment and nothing more. There was no constitutional crisis, no systematic disrespect for the ‘internal rule of law,’ no grand conspiracy.” Iran-Contra soon faded from the public’s consciousness as most Americans decided that it was an exception and not the rule of the Reagan Doctrine.