Last Night on the Titanic: The Bakers

History » Podcast Episodes » Last Night on the Titanic: The Bakers 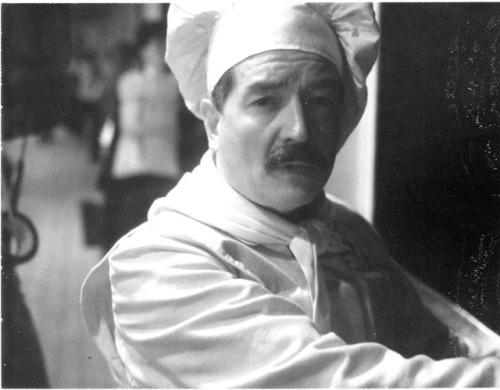 In this episode we are looking at the life of Charles Joughin, a colorful character who has appeared in both film version of the Titanic. After the sinking, Joughin claimed he knew it was an iceberg that struck the ship because he saw a polar bear— and it waved to him (although, it should be noted, he told this story to nieces and nephews largely to mask the horror of that last night aboard the Titanic).

At around 12:15 a.m. Joughin began rousing his kitchen staff. Six of his men were already working, and the others he got up out of their beds. “All hands out. All hands out of your bunks.” He directed each of them to take four loaves up for the life boats, fifty-two loaves in all. Joughin’s staff consisted of ten bakers, two confectioners, and a Vienna baker. Of the fourteen of them, ten had worked on the Olympic, the Titanic’s sister ship, and many of them had worked together.

In a bowl, whisk the egg and water together.

Preheat the oven to 425 degrees. Line a sheet pan with parchment paper. In a large saucepan, bring the water, butter, salt, and sugar to a rolling boil over medium-high heat. When it boils, immediately take the pan off the heat. Stirring with a wooden spoon, add all the flour at once and stir hard until all the flour is incorporated, 30 to 60 seconds. Return to the heat and cook, stirring, thirty seconds to “dry” it out. Transfer the mixture into a mixing bowl. Stir in one egg at a time, adding 3 of the eggs. Mix until the dough is smooth and glossy and the eggs are completely incorporated. The dough should be thick, but should fall slowly and steadily from the wooden spoon. If the dough still clings, add the remaining egg and mix until incorporated.

Using a pastry bag and a medium plain tip, pipe strips of the pâte à choux dough about the size and shape of a cocktail frank onto parchment-lined baking sheet, leaving 2 inches of space between them. You should have 6 to 20 strips. Brush with egg wash to blend in the end’s points. Bake 15 minutes at 425 degrees, then reduce the heat to 375 degrees and bake until puffed up and light golden brown, about 10-15 minutes more. Try not to open the oven door during the baking or they may deflate. Let cool on the baking sheet. In a medium saucepan, heat the milk and vanilla bean to a boil over medium heat. Immediately turn off the heat and set aside to infuse for 15 minutes. In a bowl, whisk the egg yolks and sugar until light and fluffy. Add the cornstarch and whisk vigorously until no lumps remain. Whisk in . cup of the hot milk mixture until incorporated. Whisk in the remaining hot milk mixture, reserving the saucepan. Pour the mixture through a strainer back into the saucepan. Cook over medium-high heat, whisking constantly, until thickened and slowly boiling. Remove from the heat and stir in the butter. Cover with plastic wrap, lightly pressing the plastic against the surface to prevent a skin from forming. Chill at least two hours or until ready to serve. (This can be made up to 24 hours in advance. Refrigerate until one hour before using.) To finish the éclairs, fit a small-size plain pastry tip over your index finger and use it to make a hole in the end of each pastry. Using a pastry bag fitted with a small-size plain tip, gently pipe the crème pâtissière into the éclairs, using only just enough to fill the inside.

Dip the tops of the éclairs in the warm chocolate ganache and set on a sheet pan. Chill, uncovered, at least 1 hour to set the ganache. Serve chilled.