Last Night on the Titanic: The Trend Setters 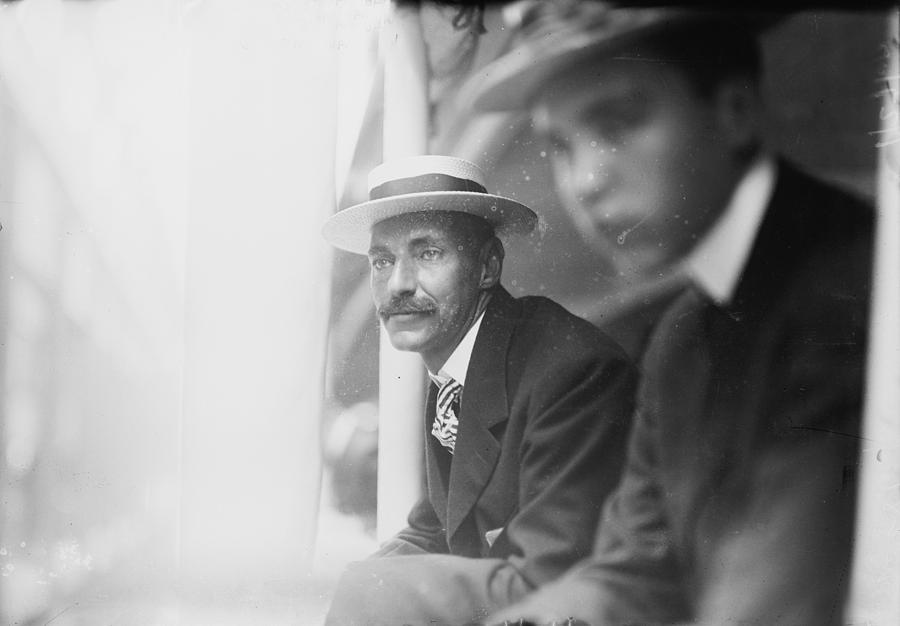 Many Titanic passengers were known for setting the styles. In this episode we will profile the two Luciles: famed fashionistas Lady Lucy Duff-Gordon and Lucile Polk Carter. We will also look at John Jacob Astor IV, perhaps the world’s richest man at the time. He founded hotels that were ground-breaking in their day and continue to set trends long after the eponymous founder’s death.

She was a descendant of President Polk.

The Hobble Skirt: Just months before she sailed on the Titanic, newspapers reported that Lucile had “created excitement in Philadelphia and New York with her daring costumes and her reckless four-in-hand driving. Not many months ago she startled Philadelphia by appearing in the lobby of one of the hotels wearing about the tightest silk costume that had been seen in the Quaker City since the hobble skirt became popular.” The hobble skirt was one of the tightest-fitting skirts around the ankle—and one of the shortest fads ever: it was popular from about 1908 to 1912.

The Edwardian fashion trend was even blamed as the cause of several deaths. One eighteen-year-old girl drowned when she fell over the railing of an Erie Canal bridge. And two years before the Titanic sailed, a woman was killed at a Paris racetrack because her hobble skirt prohibited her from getting out of the way of a horse. Safety aside, getting around in a hobble skirt was simply high-maintenance. Some women even took to taping their knees together to help balance the restriction around the ankles. In 1912, the New York Street Railway even began introducing cars with no step up to try to accommodate the fashionable ladies of Manhattan. The hobble skirt is thought by some to have been inspired by the first woman ever to ride in an airplane. In 1908, the Wright brothers were demonstrating flight in Le Mans, France, and Edith Berg volunteered for a ride. She secured her skirt with a rope around the ankles so that it wouldn’t blow up in the wind.

Lucile Polk Carter and her husband were both thirty-six when they sailed aboard the Titanic. They boarded in Southampton with their children, Lucile, fourteen, and William, eleven (some reports say nine). The children attended school in England, Lucile at Wycombe Abbey and William at Rugby. The family had two King Charles Spaniels with them aboard the Titanic. A story on the Titanic that ran in the Brooklyn Daily Eagle on April 18, 1912, described Lucile as “a woman of unusual attractiveness, daintiness, and refinement. She is well-equipped for the society of which she has become a favorite. Her mother was a famous Kentucky belle.” The story went on to say that Lucile was a “big favorite in Baltimore society, and created a sensation when introduced  . . . because of her beauty and general attractiveness.

Lucile’s maid, Auguste Serreplan, and her husband’s manservant, Alexander Cairns, were in first class with them. Charles Aldworth, Mr. Carter’s chauffeur, was in second class. The Carters’ twenty-five-horsepower Renault automobile was in the cargo hold of the ship. The Renault, the only automobile on board, was the inspiration for the romantic “steamy windows” scene in James Cameron’s movie, Titanic.

“We had a pleasant voyage from England,” Lucile told the Baltimore Sun. “The ship behaved splendidly, and we did not anticipate any trouble at all.”

Lucile went to bed around 10:45 p.m. “most of the men” were in the Smoking Lounge, her husband among them. She was awakened by a “sudden crash” one hour or so after going to bed. She looked at the clock, and it was fourteen minutes before midnight. “The first I knew of the accident was a tremendous thump that threw me out of my berth. A moment later, my husband came down to the stateroom and said we had hit an iceberg.” Both Lucile and William would later say that when they were called to the deck, it was “with no greater excitement than when they were being called to dinner.”

She stuck a diamond horseshoe into her bathrobe and went to the boat deck.

Lucile saw men helping women into lifeboats. She boarded Lifeboat 4 and took an oar. She said that at ten minutes after 1:00 a.m. there was a terrific explosion—“the giant hulk of the Titanic blew up rearing in the water like a spurred horse and then sinking beneath the waves.” The last thing she saw was the men who were left on deck, praying. As they prayed, the band was in the saloon playing hymns. Alexander Cairns did not survive the sinking, and if his body was ever found, it was not identified. Lucile, William, and their children survived the Titanic. She and her son and daughter were rescued in Lifeboat 4, along with Madeleine Astor. The rumor mill churned: some said the son was wearing a girl’s hat to board a lifeboat; others said that the couple’s divorce was precipitated because Lucile blamed William for abandoning her and her children after the Titanic hit the iceberg. William had escaped in the same lifeboat as White Star Line President Bruce Ismay—and they were the only two first class passengers in that lifeboat.

Less than 2 years later they filed for divorce – Lucile was known to have said she felt her husband had abandoned them.

She had her own line of couture clothing under that name.
Just a few weeks after the Titanic, a wedding gown designed by Lady Duff-Gordon for a high-profile wedding was worn by Linda Beatrice Morritt when she married William Barnard Rhodes. This bridal gown by “Lucile” has been displayed at the Bowe’s Museum in Barnard Castle. Sheath style.

Her own newspaper column, Just A Word from Paris, in which she gave the world regular updates on all of the latest fashions.

To this day, the style she defined—clunky, curvy high-heeled shoes; flowing diaphanous dresses shimmering with lace; pearls and embroidery; and ubiquitous hats with endless broad rims—is the signature fashion style of Edwardian times. Today, Gordon’s look is the GPS for producers of Hollywood films and television shows such as Downton Abbey. Her dresses were very detailed and decidedly feminine, with extravagances such as lace, embroidery, and silk generously incorporated. The waistlines of Edwardian dresses were high, empire-style waists just below the bust, and the dresses hung loosely. Necklines were deep, in either a square or a V pattern. The women Duff-Gordon dressed wore those charming, curvy heeled leather shoes. Hats were low-brimmed and low-sitting. Wide Art Nouveau-style headbands were popular. The era was epitomized by a soft, almost tousled look in hair and dress.
Duff Gordon had been in bed for about an hour when she was awakened by a “funny, rumbling noise.” She said it was like nothing she had ever heard before. “It seemed as if some giant hand had been playing bowls, rolling the great balls along. Then the boat stopped.” There were only twelve people aboard Lifeboat 1, which could hold forty. And most of the twelve were crew members.

The Duff-Gordon’s were accused of encouraging the crew to row as far away as they could and not to pick up people from the water. It was claimed that she offered crew members £5—roughly $180 today—each to keep rowing.

Lucy had been practically penniless as a young woman. She had married at eighteen and soon divorced. As a single mother she earned money by setting up her first dress shop in a rented space at 4 Old Burlington Street in London’s stylish Mayfair neighborhood in 1894. Around the corner were the well-heeled bespoke suit shops of storied Savile Row.

She called her first shop Maison Lucile. It caught on so fast that Lucy soon established a more permanent shop four blocks north at 17 Hanover Square, off the hurried Oxford Street thoroughfare and just a block and a half from the bustling Oxford Circus. It was so successful that she expanded and opened more, including in Paris, New York City in 1909, and Chicago in 1911. Lucy married Sir Cosmo Duff-Gordon in 1900.
At the time they traveled on the Titanic, they were living in a fabulous townhouse at 22 Lennox Gardens, Knightsbridge—a few blocks behind Harrods.

Duff-Gordon’s dress style was everywhere aboard the Titanic, but nowhere was it more paraded than in first class. Duff-Gordon sometimes stayed at the Waldorf-Astoria in New York, but on the

Thursday night after the sinking, when the Carpathia arrived in New York with her and other Titanic survivors on board, she stayed in a suite at the Ritz. Champagne and fresh flowers were placed in her suite. At dinner, there were more flowers and Champagne. Lady Duff-Gordon is said to have given her account of the sinking to Abraham Merritt, editor of Hearst’s New York Journal-American, under the influence of the bubbly. Sensational quotations in the story didn’t help her defense

Lady Duff-Gordon was forty-eight when she traveled on the Titanic, and she remembered the ship’s splendor for many years to come. “Inside this floating palace that spring evening in 1912, warmth and lights, the hum of voices, the gay lilt of a German waltz—the unheeding sounds of a small world bent on pleasure,” she said, describing the mood on the ship. “Everyone was very gay that night,” she recalled. “At a neighboring table, people were making bets on the probable time of this record-breaking run. Various opinions were put forward, but none dreamed that Titanic would make her harbor that night. . . .” “Like everyone else, I was entranced by the beauty of the liner,” Duff-Gordon said. “I had never dreamed of sailing in such luxury  . . . my pretty little cabin, with its electric heater and pink curtains, delighted me, so that it was a pleasure to go to bed. Everything about this lovely ship reassured me.” It would turn out to be a false sense of security. “I recall being pushed toward one of the boats and being helped in,” she told the Mirror. Naturally, the rumor mill hummed over what the woman who created the look for the most fashionable ladies of the Edwardian era survived the Titanic wearing. At least one report said she wore a silk kimono, a pair of pink Yantorny slippers, a blue head wrap, and a squirrel coat.

She lived out the rest of her life facing a tidal wave of scorn. There were accusations, arising from firsthand accounts, that she had bribed the crew members who were rowing her lifeboat, Lifeboat 1, which was one of the last to leave the Titanic.

Recently though, in 2012, some letters were discovered that had been squirreled away in a solicitor’s office in London for nearly a hundred years. For seemingly the first time ever, some evidence appeared to point toward vindication of the Duff-Gordons.

The letters were discovered and combed through by summer interns with Veale Wasbrough Vizards, an English law firm that had merged with Tweedies, which represented the Duff-Gordons. The letters confirm that Sir Cosmo gave the crew members of Lifeboat 1 the substantial sum of £5 each—but only after they had let him know that they had lost everything, including their jobs. The documentation also shed additional light on what it was like on the last night on the Titanic. Lady Duff-Gordon wrote that before the collision she had remarked to Francatelli,“It is so awfully cold that we might be passing icebergs.” She ate a “very merry” dinner and then went to bed.