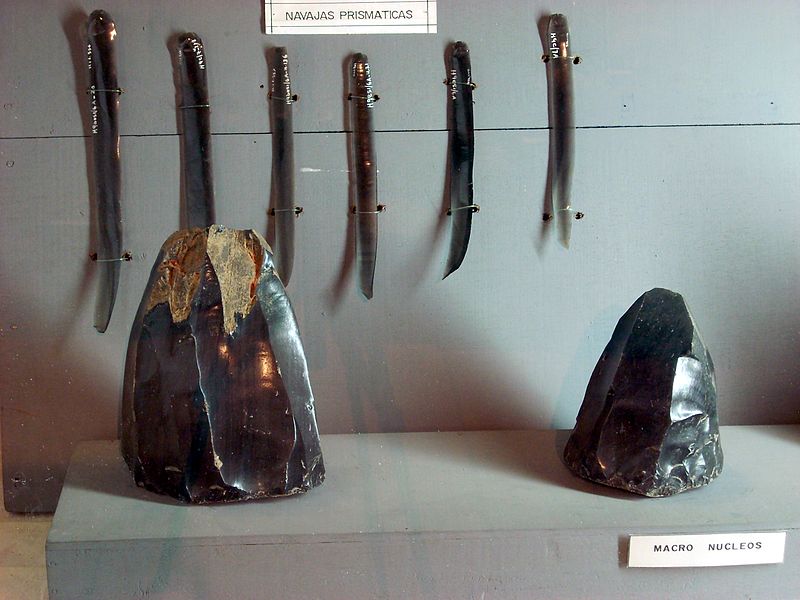 While agriculture was the basis of Maya civilization, trade was equally important. During the early Pre-Classic period, Maya living in small villages were somewhat self-sustaining. However, as the Maya began building their great cities, only trade would have brought them the essential goods they needed, such as salt and obsidian.

Maya merchants dealt in two kinds of goods, subsistence items and luxury items. Subsistence items were things used every day such as salt, especially necessary in a hot climate, foodstuffs, clothing and tools. Luxury items were those things royalty and nobles used to showcase their wealthy and power. These included jade, gold, beautiful ceramics, jewelry and feather works.

Great cities with large populations required food brought into markets. Most food was grown by farmers who lived outside the city. However, what wasn’t grown nearby had to be brought in via trade or tribute. Most foodstuffs were traded regionally or in local markets. Luxury items, on the other hand, were most often involved in long distance trading. Cultural values and ideas would also have traveled along with the merchants, which is how the various cultures in Mesoamerica influenced each other.

Foodstuffs brought to the market included turkeys, ducks, dogs, fish, honey, beans and fruit. Cacao beans were used as currency, but also to make chocolate, a drink primarily enjoyed by the wealthy. Merchants traded cacao beans throughout Mesoamerica not only in the Maya lands but also to the Olmec, Zapotec, Aztecs and elsewhere. Merchants also traded in raw materials including jade, copper, gold, granite, marble, limestone and wood. Manufactured goods included textiles, especially embroidered cloth, clothing, feather capes and headdresses, paper, furniture, jewelry, toys and weapons. Specialists such as architects, mathematicians, scribes and engineers sold their services at the market as well.

During the Pre-Classic period, merchants and the artisans who made goods for the luxury market formed a new middle class where before there had only been nobles and commoners. As trade became more important so did the power of merchants who facilitated that trade. Long distance traders took their goods along established trade routes that covered Mexico to the north all the way through Central America and even down to South America and Cuba and other Caribbean islands. As there were no draft animals such as horses or oxen and no wheeled vehicles, all long distance traders traveled by foot or by boat. Hired porters carried the goods in a large basket on their backs, made easier by part of the weight being carried by a headband called a mecapal.

Some Maya city-states became commercial hubs along important trade routes. Tikal, for example, was not rich in natural resources, but grew wealthy through its ability to facilitate trade to the rest of Guatemalan Maya cities. Tikal, Copan and Cancuen all developed their economies through operating as major trade hubs.

Besides the trade route on land, important maritime trade took place as well. The Tainos of the Caribbean island of Cuba and the Quechua from South America traded with the Maya for cacao beans. Large trading canoes that held up to 20 people as well as a significant amount of trade goods traveled up and down the coasts.