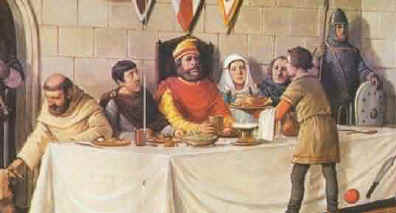 Listen to the audio of this podcast on medieval food here:

Medieval food was often plain due to scarcity of resources and limited trade, but on celebratory occasions among the nobility the food could become decadent. The picture above shows a Norman lord dining in the great hall of his castle or manor house.

His table is set at one end of the great hall and he sits in a high-backed chair. His guests, the priest, two noblemen and his wife, sit on his table while less important people eat sitting on stools or benches at trestle tables lower down the hall.

A knight stands at either end of the table ready to protect his lord from attack. A serving boy offers the lord first choice of the plate of meat. The lord’s guests will be served next and the less important people will get whatever meat remains.

Above the lord’s head, part of the shields bearing his coat of arms can be seen, while at the bottom right corner a flying knife and ball offer evidence that the lord is being entertained by a juggler. The plates used by the Normans were made out of wood. Sometimes they used large slices of day-old bread as plates for the meat and sometimes they ate out of bowls.

Although they had knives and spoons, there were no forks, so people used their fingers a great deal. The lord always ate well, even during winter. Unlike most of the people who lived on his manor, he could afford to buy salt to preserve his meat all the year round. He could also afford pepper to spice tasteless food or food which was beginning to go bad.

The consumables of a peasant was often limited to what came from his farm, since opportunities for trade were extremely limited except if he lived near a large town or city.

The peasants’ main food was a dark bread made out of rye grain. They ate a kind of stew called pottage made from the peas, beans and onions that they grew in their gardens. Their only sweet food was the berries, nuts and honey that they collected from the woods.

Peasants did not eat much meat. Many kept a pig or two but could not often afford to kill one. They could hunt rabbits or hares but might be punished for this by their lord.

The difference in medieval food consumed between peasants and lords can even be seen in the food vocabulary of English today. The lowered status of the defeated English after the French Norman Conquest of 1066 can be seen clearly in the vocabulary of meat. An Anglophone farmer used plain Saxon words for his livestock: cow, pig, sheep, chicken. Any animal eaten by a peasant had the same word used for whether the animal was alive or cooked.

But when these animals were butchered and found their way onto his Norman master’s plate, they acquired French-derived names: beef, pork, mutton.

A Comprehensive Guide to Medieval Life