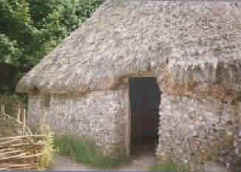 The only type of medieval house that survive today are those of the wealthy. They have survived because they were made out of stone.

The Medieval House in the Early Medieval Period – Noblemen and Women

This medieval cottage from the thirteenth century, has been reconstructed by the Weald and Downland Museum, Sussex, England. It was inhabited by the Lord of the Manor, his family and servants. It has two rooms, one containing the hearth that would have been the main living area. The other room contains a stone oven.

The house would have been very dark and smoky inside as there is no chimney and only a small window. The animals would have been housed in a separate building, probably a wooden barn, and another building would have been used to store crops which were grown on the land around the house.

The Medieval House in the Later Medieval Period – Noblemen and Women

In the later medieval period the houses of the rich were made out of brick. However, brick was very expensive so many chose to make the half-timbered houses that are now commonly referred to as Tudor houses.

Tiles were used on the roofs and some had chimneys and glass in the windows. These houses had two or more floors and the servants slept upstairs.

The Medieval House in the Early Medieval Period – Peasants

The Black Death of 1348 killed a large number of the peasant population. This meant that there were not enough peasants to work in the fields. Landowners desperate for workers to harvest their crops began offering wages to anyone who would work on their land. Peasants were, for the first time, able to offer their services to the landowner that would pay the highest wage.

With more money, peasants were able to afford better housing and many now lived in wattle and daub houses.

Wattle and Daub houses were taller and wider than the simple stick and straw houses. They also offered better protection from the weather. They were made by first constructing a framework of timber, then filling in the spaces with wattle (woven twigs). Finally, the twigs were daubed with mud which, when dried, made a hard wall.