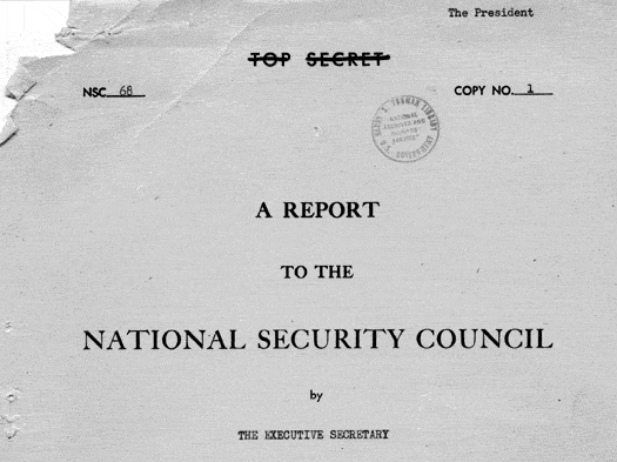 The following article on NSC-68 is an excerpt from Lee Edwards and Elizabeth Edwards Spalding’s book A Brief History of the Cold War It is available to order now at Amazon and Barnes & Noble.

The prospect in 1950 of a united and expansionist communism, led by the Soviet Union and Communist China, led the Truman administration to draft and adopt the most important national security document of the Cold War—National Security Council Report 68.

In late January 1950, Truman requested an in-depth report on the continuing world crisis. Drafted by Paul Nitze, who had replaced George Kennan as the director of the State Department’s Policy Planning Staff, and a team of State and Defense Department officials, NSC-68 was submitted to the president in April.

Truman was reacting to a series of aggressive communist actions, including the Soviet organization in January 1949 of the Council of Mutual Economic Assistance (Comecon), intended to strengthen the USSR’s hold on Eastern Europe; the successful Soviet test in September of an atom bomb; the establishment of the People’s Republic of China; the creation of the communist German Democratic Republic (East Germany); and Mao’s public promise that China would side with the Soviet Union in the event of a third world war.

Of special concern to the president was the Soviet explosion of an atomic bomb, which the administration had not expected until mid-1950 at the earliest. Truman quickly decided that the United States should proceed with the development of a hydrogen bomb. He defined the key components of American military strength as a modernized and trained conventional capacity and a nuclear edge over the communists.

NSC-68 presented Truman with a comprehensive plan of action to meet the Soviet challenge. The plan would serve as America’s core strategy until superseded by President Richard Nixon’s policy of détente in the early 1970s.

Here are the sections of NSC-68.

In sharp contrast, the Kremlin is driven by the desire to achieve absolute power and extend it over the nonSoviet world. Communist ideology requires the enslavement not the fostering of the individual. The Soviets’ primary strategic target is the United States, the bulwark of opposition to Soviet expansion.

The document outlines a wide-ranging strategy to meet communist imperialism. The primary goal is to maintain a strong free world—politically, morally, economically, and militarily—and to frustrate the Soviet design and bring about its internal change.

The Truman administration saw Soviet intentions and capabilities as interlaced. Had Truman gauged capabilities with no reference to ideology and intentions, he might have given way to the Soviets in Berlin rather than ordering the airlift.

The primary Soviet weakness identified by NSC-68 is the nature of its relationship with the peoples of the USSR. The Iron Curtain surrounding the satellite nations holds together the Soviet empire. The document looks to the independence of nationalities as a natural and potent threat to communism.

Containment is defined as blocking further expansion of Soviet power, exposing communist ideology, weakening the Kremlin’s control and influence, and fostering the seeds of destruction within the Soviet system. At the same time, it leaves open the possibility of U.S. negotiations with the Soviet Union—but from a position of American strength.

Just as the Truman Doctrine, the Marshall Plan, and NATO had done, the document calls for a free world to which, at a minimum, the Soviet Union must adjust. Rather than coexisting with the USSR, it argues, the free world’s combined strength—made up of democracies under the rule of law, with open markets, and rooted in Western principles—would transform the Soviet system. It was the definitive statement of the U.S. strategy to expose and act against communist tyranny whenever and wherever possible—a strategy that would soon be seriously tested.