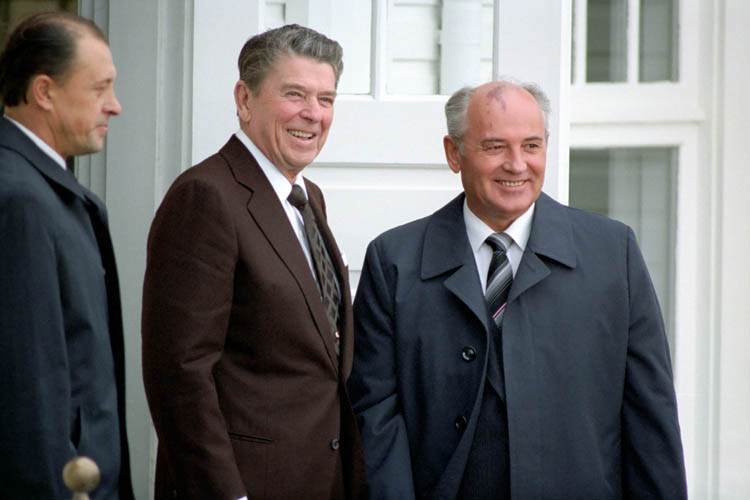 The following article on the Reagan foreign policy is an excerpt from Lee Edwards and Elizabeth Edwards Spalding’s book A Brief History of the Cold War It is available to order now at Amazon and Barnes & Noble.

The new conservative president summed up the aims of his foreign policy as “We win, and they lose.” In his first presidential news conference, Reagan stunned official Washington by denouncing the Soviet leadership as still dedicated to “world revolution and a one-world socialist-communist state.” As he put it in his 1990 autobiography, “I decided we had to send as powerful a message as we could to the Russians that we weren’t going to stand by anymore while they armed and financed terrorists and subverted democratic governments.”

Reagan Foreign Policy: A New Approach to the Cold War

The foreign policy establishment was appalled at such saber rattling. Because the Soviet Union was apparently economically strong and militarily powerful, many continued to argue that the only responsible policy was détente. After visiting Moscow in 1982, Harvard professor Arthur Schlesinger Jr. declared, “Those in the U.S. who think the Soviet Union is on the verge of economic and social collapse, ready with one small push to go over the brink, are . . . only kidding themselves.” Two years later, the establishment’s favorite economist, John Kenneth Galbraith, following a prolonged visit to the Soviet Union, delivered a glowing appraisal of Soviet economics. “The Russian system succeeds,” he said, “because in contrast to the Western industrial economies, it makes full use of its manpower. . . . The Soviet economy has made great national progress in recent years.” The following year, 1985, Mikhail Gorbachev took command of an almost bankrupt Soviet Union.

Reagan’s greatest strength, John Lewis Gaddis says, was his ability to see beyond complexity to simplicity. He saw that “because détente perpetuated—and had been meant to perpetuate—the Cold War, only killing détente could end the Cold War.”

Based on intelligence reports and his own instincts, Reagan concluded that communism was in fact cracking and ready to crumble. He took personal charge of U.S. foreign policy. The Reagan foreign policy quickly made itself known. In his first year, the president chaired fifty-seven meetings of the National Security Council.

The president went public with his bold diagnosis of the Soviet Union’s systemic weakness in May 1982, declaring that the Soviet empire was “faltering because rigid centralized control has destroyed incentives for innovation, efficiency and individual achievement.” A month later, speaking to the British Parliament in Westminster, Reagan said that the Soviet Union was gripped by a “great revolutionary crisis,” famously predicting that “the march of freedom and democracy . . . will leave Marxism-Leninism on the ash-heap of history as it has left other tyrannies which stifle the freedom and muzzle the self-expression of the people.”

Like Truman before him, Reagan  and the Reagan foreign policy did not accept that America should accommodate the Kremlin, and he resurrected Truman’s policy that the United States should negotiate with the Soviets only from a position of strength. Further, he recognized the fatal weakness in the Soviet Union: it was continually expanding its empire but was suffering from serious political, economic, and spiritual weakness at its core. The president aimed to exploit this weakness through the application of American political, economic, and military power in order to bring the Soviets to the negotiating table on terms favorable to America and its allies.

Reagan’s new strategy of changing rather than simply containing the Soviet Union was implemented through a series of national security decision directives over the next year. The Reagan foreign policy can be summed up with the following points:

This article on the Reagan foreign policy is an excerpt from Lee Edwards and Elizabeth Edwards Spalding’s book A Brief History of the Cold War. It is available to order now at Amazon and Barnes & Noble.