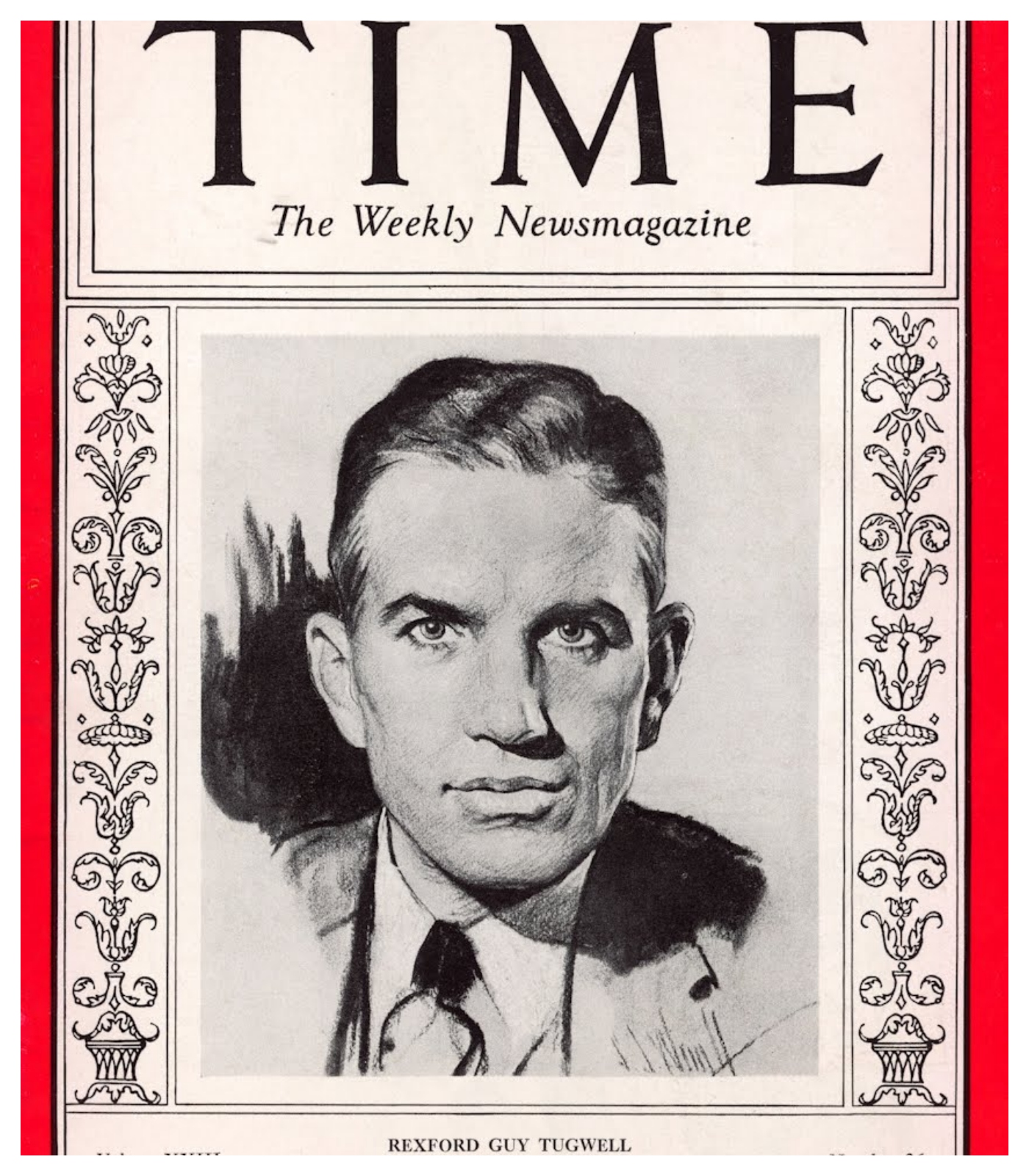 If Rexford Tugwell was good enough to belong to Franklin D. Roosevelt’s group of advisors that were known as (and thus the provenance of the term) the “brain trust”, then he’s probably good enough to be remarked upon in the annals of history.

A key figure in the “New Deal”, Rexford Tugwell wrote many books on politics and even served as the Governor of Purto Rico.

Born on July 10th, 1891 in Chautauqua County, New York, Tugwell studied economics at the Wharton School of the University of Pennsylvania and completed his doctorate at Columbia University, graduating in 1916. Tugwell would later cite the tutelage of Scott Nearing and Simon Patten as major influences in his life. In shaping his philosophical sensibilities, Tugwell would list the great John Dewey as an inspiration.

Tugwell would then go on to teach at Wharton and various other preeminent schools such as the University of Washington, eventually joining the University of Colombia faculty in 1920, where he became an economics professor.

So it was in 1932, during the presidential election, join Roosevelt’s team that would advise him on agricultural policy. This team would include luminaries such as future Vice-President Henry Wallace and future Secretary of the Treasury, Henry Morgenthau as well as George Peek and Hugh Johnson.

As spartacus-educational.com stated that Wallace and Tugwell were both impressed with a plan put forward by M. L. Wilson, a professor of agricultural economics at Montana State Agricultural College. Wilson’s idea was called the domestic allotment plan. Farmers who agreed to limit production would be rewarded with “allotment payments” which would supplement the income they received for crops on the open market. Its main purpose was not to subsidize farmers but to control production.

The trust itself was a bubbling cauldron of political disagreement and was by no means a monolithic voice. Author Patrick Renshaw wrote on the salience and utility of this schism: “Politically, Tugwell was on the left with Berle on the right. Moley chaired regular meetings of the brains trust, which Samuel Rosenman and Basil O’Connor also attended. FDR was not an intellectual, but enjoyed their company and was in his element at the free-wheeling discussions which hammered out the New Deal.”

The group disagreed about many issues. Raymond Moley argued that the government should work very closely with businessmen whereas Tugwell distrusted business and placed his confidence in government planners who would administer the economy. Adolf Berle wanted the government to “evangelize the businessman rather than resort to the naked power of the state”. Tugwell and Berle were also influenced by the economic ideas of J.A. Hobson and John Maynard Keynes but Moley held serious doubts about rapidly increasing government spending.

So, it was in 1934, when Tugwell, as the Undersecretary of the United States Department of Agriculture, helped in creating the Agricultural Adjustment Administration (AAA), serving as its director.

According to Britannica.com, The AAA was a major New Deal program to restore agricultural prosperity during the Great Depression by curtailing farm production, reducing export surpluses, and raising prices. The Agricultural Adjustment Act was an omnibus farm-relief bill embodying the schemes of the major national farm organizations. It established the Agricultural Adjustment Administration under Secretary of Agriculture Henry Wallace to effect a “domestic allotment” plan that would subsidize producers of basic commodities for cutting their output. Its goal was the restoration of prices paid to farmers for their goods to a level equal in purchasing power to that of 1909–14, which was a period of comparative stability. In addition, the Commodity Credit Corporation, with a crop loan and storage program, was established to make price-supporting loans and purchases of specific commodities.

Although benefit payments to farmers totaled $1.5 billion by 1936, a rise in commodity prices was attributable mainly to severe drought conditions in 1933–36. In spite of its limited achievements, the early AAA program was favored by most farmers. The U.S. Supreme Court declared the act unconstitutional in 1936, and Congress passed new agricultural legislation two years later based on the soil conservation concept. While farmers’ cash income doubled between 1932 and 1936, it took the enormous demands of World War II to reduce the accumulated farm surpluses and to increase farm income significantly.

Although a strong supporter of economic planning, Tugwell was more conservative in his views about federal relief programs. Eventually, he became convinced that the country needed a balanced budget, Tugwell opposed the idea of an extensive welfare system.

So, it was in 1937 that Tugwell resigned from the Roosevelt administration.

After a brief stint in the private sector as Vice President of American Molasses, work in the government would prove to be a clarion call from which Tugwell did not feel entitled to walk away.

He would go on to become chairman of the New York City Planning Commission in 1938. His commission sought to establish public housing at moderate densities, yet repeatedly approved FHA requests for greater density.  Tugwell’s proposed fifty-year master plan by the infamous Robert Moses.

Tugwell finally settled in Puerto Rico, accepting a job in education in 1941 as chancellor of the University of Puerto Rico.

Sparactus-education.com went on to state that Tugwell became governor of Puerto Rico in 1942. This was a popular appointment and during the next four years improved the civil service, established auditing procedures, and helped to diversify Puerto Rican agriculture and to reduce its dependence on sugar production.

In 1946 Tugwell returned to teaching and worked at the University of Chicago (1946-57) and the Center for the Study of Democratic Institutions at Santa Barbara (1957-1964). Along with his friend, Henry A. Wallace, he formed the Progressive Citizens of America (PCA). Members included Paul Robeson, W.E.B. Du Bois, Arthur Miller, Dashiell Hammett, Hellen Keller, Thomas Mann, Aaron Copland, Claude Pepper, Eugene O’Neill, Glen H. Taylor, John Abt, Edna Ferber, Thornton Wilder, Carl Van Doren, Fredric March, and Gene Kelly. A group of conservatives, including Henry Luce, Clare Booth Luce, Adolf Berle, Lawrence Spivak, and Hans von Kaltenborn, sent a cable to Ernest Bevin, the British foreign secretary, that the PCA was only “a small minority of Communists, fellow-travelers and what we call here totalitarian liberals.” Winston Churchill agreed and described Tugwell and his followers as “crypto-Communists”.