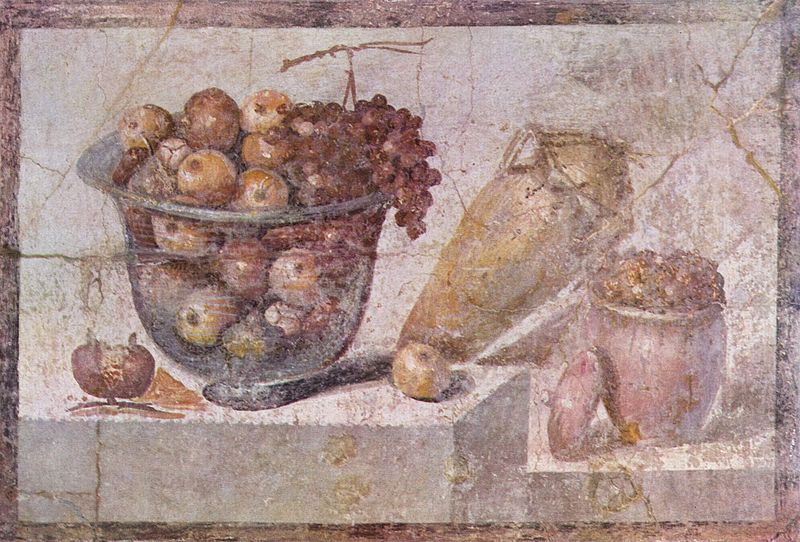 Despite the opulence of the city of Rome, and the power of its imperial army, Roman food was quite plain by modern standards and served in small portions. As such, the Romans did not eat huge meals.

Their main food was pottage. Pottage is a kind of thick stew made from wheat, millet or corn. Sometimes they would add cooked meat, offal or a sauce made out of wine.

Food for the common people consisted of wheat or barley, olive oil, a little fish, wine, home grown vegetables, and if they were lucky enough to own a goat or cow or chickens, cheese and a few eggs.

As the Republic grew and the Empire expanded the Romans came into contact with food from other ethnic grojuops. They used herbs and spices to flavor their food and began eating more fish, especially shell fish.

Vegetables were plentiful and most of the Roman’s recipes included vegetables. They also ate a lot of fruit, especially grapes, and made wine.

The Romans ate their food with their fingers. They used knives made from antlers, wood or bronze with an iron blade to cut their food. They also had spoons made from bronze, silver and bone which they used to eat eggs, shellfish and liquids.

Breakfast – This would be eaten early, probably as soon as the sun rose and would include bread and fresh fruit.

Lunch – Probably taken around noon. Lunch was only a small meal as it was thought a large meal would make one fall asleep in the afternoon. It would include some of the following – a little cooked meat – ham or salami, salad, cheese, hard-boiled eggs, vegetables and bread.

Dinner – This would begin at about four in the afternoon and could continue into the night. The starter would be either a salad or dish of small fish. The main course of fish, cooked meat and vegetables would be served next. The dessert would consist of fresh fruit and cheese. Sometimes small cakes sweetened with honey would be served.