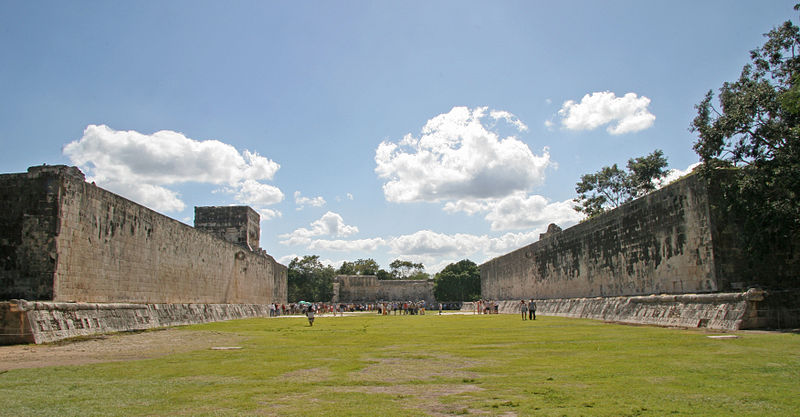 The Mesoamerican ball game was played, experts think, by all the cultures in the region, beginning with the Olmecs who may have invented it. The ball game goes back 3,500 years, making it the first organized game in the history of sports. Mayans loved the game and everyone played at various times, but it also held deep religious, ritual meaning as well. For that reason, it was sometimes played just as a game, with lots of gambling on the teams. At other times, the game became spectacle and ritual, with the city rulers playing captive warriors in rigged, ritual games. The captives would lose the game and then be sacrificed.

Most, but not all, Mayan cities had ball courts, many more than one. Thirteen hundred ball courts are scattered throughout Mesoamerica and all of them have the same I shape, that is, two sloping walls for the ball to bounce on, a long narrow playing field and two end zones. Guatemala, home of the earliest Mayan cities, holds over 500 ball courts alone.

While no one knows the exact rules of the ball game, Spaniards who saw the Aztec games in the 1500s reported that two teams of two to five players had to keep the ball in the air without using their hands or feet. They hit the ball with their upper arms, thighs or hips. The rubber balls they used were of varying weight and size, from the size of a softball to a soccer ball. Solid rubber balls were heavy—up to eight or nine pounds—and could cause serious injury or even death. Games were won mostly by points. Around A.D. 1200, stone circles with a hole in the middle were attached high up on the walls of the ball court, up to six meters high. While getting a ball through the hole was rare, if a player got the ball through the hole, it was an instant win.

Besides games just for fun and athletics, ceremonial games carried a great deal of religious significance, acting out the creation myth, or keeping the sun and moon in their accustomed orbits. While modern readers may put much weight on at such a reason, to the Maya it was a matter of life and death and one of the reasons for human sacrifice. The gods needed human blood and hearts to keep the sun and moon in orbit. Some ball games were played to resolve bitter disputes between rival cities or as a proxy for war. The Maya also saw the game as a battle between the gods of death and the gods of life or between good and evil. They also saw it as a reminder of the Hero Twins, who overcame death and became demi-gods themselves. Thus, the game symbolizes regeneration and life.