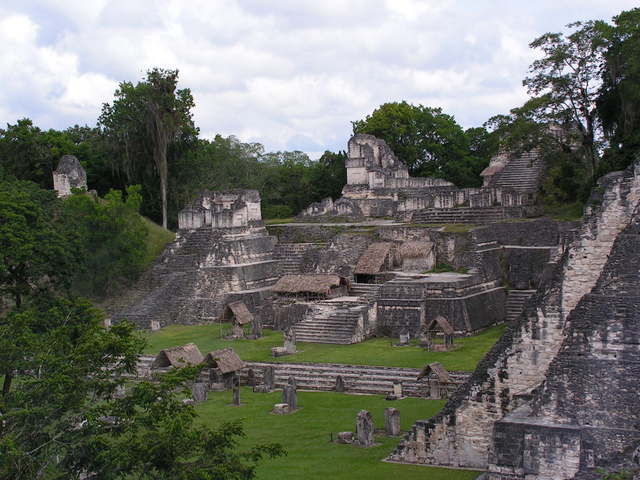 During the Mayan classic era, A.D. 250 to 900, millions of Maya lived in dozens of great city-states. The Mayan culture reached its zenith in culture, monumental architecture, great trading networks, the arts, mathematics and calendrics, astronomy and cosmology, engineering, a fully developed writing system, intensive agriculture and sophisticated religious ceremonies. The classic era is divided into the early (250 to 600), late (600 to 800) and terminal (900 to 1100).

During the early classic period, many Mayan cities developed in the southern lowlands, including Tikal in the Peten, Calakmul in Campeche and Caracol in Belize. Stone monuments called stela portray dynastic rulers with emblems of power. More city states developed in the lowlands including Palanque, Yaxchilan, Altar de Sacrificios, Copan and Quirigua. The northern lowlands saw the growth of Edzna, Ek Balam and Coba. All these cities traded with one another, although they also fought each other for control of trade. The great Mexican city of Teotihuacan influenced Maya culture during much of the early classic. Trade with that city brought a new weapon, the atlatl or spear thrower. Teotihuacan also extended political power into the Peten and may even have installed a dynastic ruler in Tikal.

City states of the early classic held populations of 10,000 to 100,000 in a complex, stratified culture. At the top, a hereditary king and a small class of elite nobles ruled. Merchants, artisans, bureaucrats, engineers, architects, warriors and artists all had their established places in Mayan society. Common laborers and slaves did the backbreaking work of intensive agriculture and massive building. Trading networks stretched throughout Mesoamerica. City-states jockeyed with each other for power and control, especially Tikal and Calakmul.

The late classic period from 600 to 900 was a time of growth and development for some great Mayan city states and a time of deep decline for others. Tikal, for example, which had flourished and become quite powerful declined drastically a few hundred years later. Around 600, Teotihuacan was sacked and burned. Kaminaljuyu declined as well. Yet overall, many more Mayan city states grew and prospered. Populations expanded and art, writing, astronomical knowledge and calendrics reached their height. Palenque, Copan, Dos Pilas and Uxmal flourished during this time. More Mayan cities were built.

Nevertheless, destructive wars began to take their toll during these years. Caracol allied with Calakmul to bring down Tikal. Cities expanded, made alliances and undertook huge building projects. However, endemic warfare could and did bring them down. The 700s and 800s saw steep declines in many city-states for reasons scholars are still debating. By the 900s, a dozen major Mayan city-states and many smaller sites were abandoned.

Scholars call the years from 900 to 1100 the terminal classic for a reason. The tens of millions of Mayans alive in the 800s had exceeded the carrying capacity of even intensive agriculture. Drought, soil erosion, loss of soil fertility and deforestation led to malnutrition, starvation and disease. To the environmental factor, add constant warfare and loss of faith in ruling dynasties. While scholars cite no one principal reason for the collapse of the Mayan classic period, no doubt complex political, social and environmental factors led to its decline.

This article is part of our larger selection of posts about the Mayans. To learn more, click here for our comprehensive guide to the Mayans.

The Mayan Calendar: How Did It Work and How Long Was It?