The Titanic – The Californian

So near but yet so far away….

The Titanic was not the only ship in the North Atlantic ice field on the night of 14th April 1912.

At around 10.30pm the liner Californian had stopped at the edge of the ice field for the night. They had turned off their radio and the operator had gone to bed.

The night crew of the Californian noticed a big passenger liner stop some six miles to the south at 11.40pm.

Shortly after midnight the Captain of the Californian was told by his crew that the big passenger liner was firing rockets into the sky. They concluded that the ship had stopped for the night and was having a party. 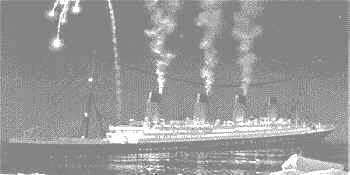 At 2.20am it was noticed that the big ship had disappeared and the crew believed that it had steamed away.

At 3.20am more rockets were seen and by 4.00am another ship, the Carpathia, could be clearly seen in the last noted position of the big liner.

The Californian’s wireless operator was awoken at around 5am and the crew learned of the fate of the Titanic.

In the British and American inquiries into the disaster, Captain Stanley Lord of the Californian maintained that his ship was positioned nineteen miles north of the Titanic not six and could not have reached the Titanic in time to rescue passengers.

However, many of Titanic’s survivors testified that there was indeed another ship about six miles north of Titanic.

The inquiries concluded that the Californian had indeed been just six miles to the north of Titanic and could have reached the Titanic before it sank.

But was it the Californian?

Could there have been another ship in the area?