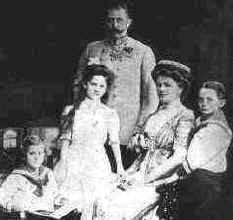 Franz Ferdinand, aged 51, was heir to the Austro-Hungarian empire. He was married to Sophie Chotek von Chotvoka and had three children. Franz Ferdinand was, however, very unpopular because he had made it clear that once he became Emperor he would make changes.

The map below, of the Austro-Hungarian Empire in 1914, shows that Bosnia/ Herzegovnia was controlled by Austria. Austria had annexed Bosnia in 1908, a move that was not popular with the Bosnian people. 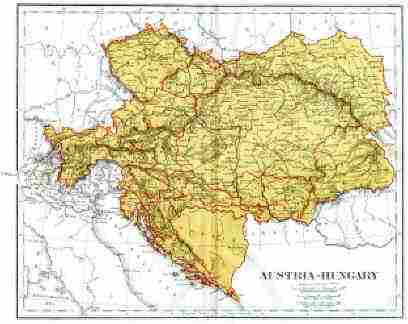 Franz Ferdinand decided to visit Sarajevo, the capital of Bosnia and Herzegovnia, to make an inspection of the Austro-Hungarian troops there. The inspection was scheduled for 28th June 1914. It was planned that Franz Ferdinand and his wife Sophie would be met at the station and taken by car to the City Hall where they would have lunch before going to inspect the troops.

A Serbian terrorist group, called The Black Hand, had decided that the Archduke should be assassinated and the planned visit provided the ideal opportunity. Seven young men who had been trained in bomb throwing and marksmanship were stationed along the route that Franz Ferdinand’s car would follow from the City Hall to the inspection.

The first two terrorists were unable to throw their grenades because the streets were too crowded and the car was travelling quite fast. The third terrorist, a young man called Cabrinovic, threw a grenade which exploded under the car following that of the Archduke. Although the Archduke and his wife were unhurt, some of his attendants were injured and had to be taken to hospital.

After lunch at the City Hall, Franz Ferdinand insisted on visiting the injured attendants in hospital. However, on the way to the hospital the driver took a wrong turn. Realising his mistake he stopped the car and began to reverse. Another terrorist, named Gavrilo Princip, stepped forward and fired two shots. The first hit the pregnant Sophia in the stomach, she died almost instantly. The second shot hit the Archduke in the neck. He died a short while later.

Drawing of the  arrest of Gavrilo Princip

Gavrilo Princip was arrested but was not executed because he was under 20 years. He was sentenced to twenty years in prison where he died of TB in 1918.