The Anti-Religious Campaign In the Soviet Union

History » Cold War » The Anti-Religious Campaign In the Soviet Union 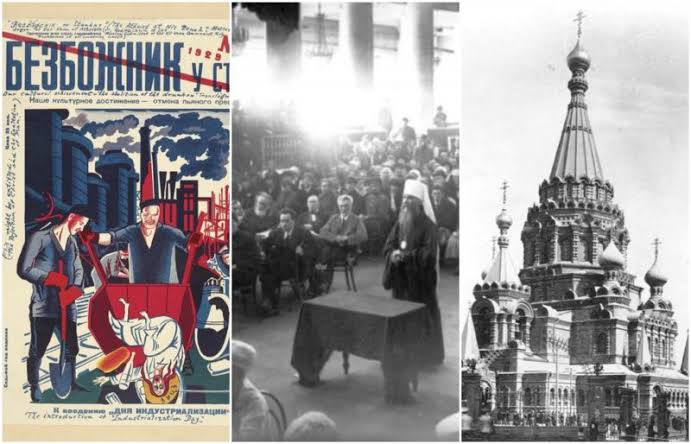 The anti-religious campaign In the Soviet Union was a campaign of anti-religious persecution against churches and religious faithful by the Soviet government following the initial anti-religious campaign during the Russian Civil War. From 1917 to 1991 the Communist Party destroyed synagogues, churches, and mosques, killing between 12 and 20 million. Religious leaders were harassed, imprisoned, tortured, and even executed in the push to instill “scientific atheism.” In the “Great Purge,” up to 100,000 clergy members were slaughtered over a two-year period from 1936 to 1938.

The official Soviet stance toward religion was to completely destroy religious institutions and ideas in the belief that communist ideology could not flourish alongside religious ideas and institutions. Communist propaganda took on a militant edge against all forms of idealism and religion. Atheists were considered to be more politically astute, intelligent, and loyal party members.

Relations between the Soviet state and the religious were not always so antagonistic: The Communist Party often rejected the approach of treating all religious believers and practitioners as public enemies. This was largely due to the reality that large numbers of Soviet citizens adhered to a particular faith and they could not all be imprisoned or punished. The authorities would also oscillated between carrot and stick approaches, sometimes believing that proper education and incentives could lead people to abandon their religious tenets.

However, this campaign was underplayed or even ignored by members of the international intellectual and political community who were sympathetic to the Soviet Union’s approaches to economics and eliminating social stratification.

Anti-Religious Campaign In the Soviet Union: The View From the West

Professor Paul Douglas of the University of Chicago was part of a trade union delegation that visited the Soviet Union in 1927. Professor Douglas later proclaimed that in Russia, people’s “real rights, that is their economic rights, are much better protected than in any other country.” Speaking on behalf of that delegation, John Brophy told Soviet leader Joseph Stalin: “The presence of the American delegation in the USSR is the best reply, and is evidence of the sympathy of a section of the American workers to the workers of the Soviet Union.”

Labor leader Sidney Hillman, who headed the Amalgamated Clothing Workers, shared this positive view of the Soviet Union. “My conviction is that Russia is in an era of great economic reconstruction,” he said. “I have never met a group of people that is so realistic, so practical, so courageous, and so able to handle the greatest job, as the group of people who have charge of the destinies of the Russian nation today.” The president of the International Ladies Garment Workers’ Union announced that the Soviet Union’s workers “appear to be ready to undergo all kinds of misery as a necessary sacrifice for the attainment of the ideal communistic state, which, they believe, is on the way now.”

For his part, social thinker Horace M. Kallen reported: “All, regardless of party, acknowledge that the revolution has awakened the millions, that the government, ‘dictatorship’ though it be, has liberated their energies, animated them with an altogether unprecedented sense of personal dignity and inward worth, [and] opened to them hitherto sealed worlds of science and art and personal advancement.” (Note the quotation marks around “dictatorship.”)