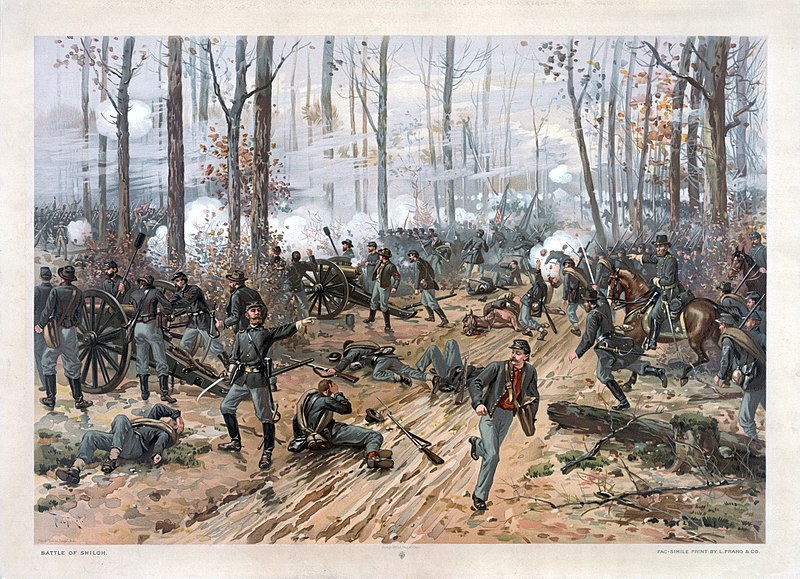 The Background of the Battle of Shiloh

The behind scene of Battle of Shiloh is that in Virginia, Stonewall Jackson kept the Federals baffled in the Shenandoah Valley and fearful of a possible Confederate attack on Washington; that, and the fact that General George McClellan was now in command of Federal forces, meant stasis on the Eastern front.

In the West, things were going badly for the Confederacy. Confederate General (and Episcopal bishop) Leonidas Polk had been the first to trespass troops into officially neutral Kentucky (which had a pro-Confederate governor and a pro-Union legislature), but the Federal counterthrust put much of the state in Union hands. Missouri was a goner too, and Federal troops were on the march in Arkansas and Tennessee.

The Union hero of the West was Ulysess S. Grant—a fighting general whose victory at Fort Donelson, Tennessee, 16 February 1862 had won him the nickname of “Unconditional Surrender” Grant. Grant was now at Pittsburgh Landing, Tennessee. Grant’s Union army of the Tennessee had 42,000 troops (37,000 immediately at hand, 5,000 a short march away) and he was looking to combine his forces with General Don Carlos Buell’s Army of the Ohio, numbering about 50,000 men, who were occupying Nashville.

Before these two giant Union armies merged, Confederate General Albert Sidney Johnston wanted to smash one of them. A Kentucky-born, Louisiana-raised West Pointer, before the war Johnston had been considered the finest Southern officer in the Army. As the Confederate West crumbled, his reputation had crumbled too. Attacking Grant was to be his redemption; the result was the battle of Shiloh.

Beauregard, Johnston’s second-in-command, had drawn up the plan, and at dawn, Sunday, 6 April 1862, Johnston’s rebel-yelling Confederates put it into action, bursting upon the unprepared Union encampment, announcing themselves by shooting dead an aide standing next to General Sherman. The Confederates drove the Federals back: Sherman was on the Union right, General John McClernand holding the Union center behind the Shiloh church. On the Union left was General Benjamin Prentiss, whose troops found a sunken road forming a natural trench where they could reform and mow down charging Confederates. The rebels dubbed this part of the Yankee line “the Hornets’ Nest.” The Confederate attack all along the line was so powerful that Grant thought he was facing 100,000 men—and it is proof of his mettle that he resolved to fight it out.

The Hornets’ Nest held together—even under Confederate artillery attack—but no other part of the Union line did, as Sherman and McClernand continued their fighting retreats. With Confederates encircling the nest, and more than half of his men dead, Prentiss finally surrendered. As daylight petered out, Beauregard called off any further advances. Albert Sidney Johnston was dead—killed leading a charge against a heavily fortified peach orchard near the Hornets’ Nest—but the Confederates had won the field. Beauregard thought his men needed to be regrouped; they could finish off Grant’s army in the morning.

But Grant was resolute. In the morning, with 26,000 reinforcements, he counterattacked, and in a military danse macabre, the battle of the day before was repeated, though this time it was the rebels who fought on the retreat. By mid-afternoon, the Federals had pushed all the way back to their original lines, and Beauregard conceded the ground.

There were more casualties—24,000—at Shiloh than there had been in the American War of Independence, the War of 1812, and the Mexican War combined, and yet the battle itself was a bloody draw. After battle of Shiloh, Grant said: “I gave up all idea of saving the Union except by complete conquest.”

The Battle of Shiloh was a battle in the Western Theater fought April 6–7, 1862, in southwestern Tennessee. On the first morning, 40,000 Confederate troops struck Union Soldiers at Pittsburg Landing. They were under the command of Major General Ulysses S. Grant. The Confederate Army of Mississippi, under the command of General Albert Sidney Johnston, launched a surprise attack on Grant’s army from its base in Corinth, Mississippi. Johnston was mortally wounded during the fighting; Beauregard took command of the army and decided against pressing the attack late in the evening. Overnight, Grant was reinforced by one of his divisions stationed further north and was joined by three divisions. The Union forces began an counterattack the next morning which reversed the Confederate gains of the previous day.

The Battle of Shiloh

Subsequent Developments in the West