The D-Day landing of June 6, 1944, ranks as the boldest and most successful large-scale invasion in military history. Click here to see more articles in this category. 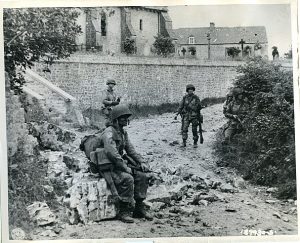 Shortly after midnight on June 6th, 1944 close to about 7,000 U.S paratroopers jumped from their planes into the pitch black night over Nazi-held northern France. What they were met with was an impenetrable fog, scattered team members, and a hail of German flak rounds that pierced the fog to greet them.

In the early hours of June 6th, 1944 the 101st Airborne Division would lead the first wave of combat landings in Operation Neptune, or what would come to be called D-Day. This is the story of how these men prepared, the conditions of their jump, and how much of an important role the 101st Airbourne Division had in securing a foothold for the nearly 160,000 soldiers landing on the beaches of Nazi-held Normandy. This is the story of Mission Albany

In total Mission Albany would consist of 6,928 U.S paratroopers, 2,300 seaborne glider reinforcements, and a grand total of 443 C-47 jump planes. Making this mission alone one of the largest airborne assault missions in history. This massive assault force of nearly 7,000 paratroopers jumped in less than one hour in 3 spots around Normandy. 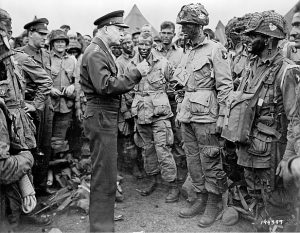 While D-Day had been planned by Allied command for well over a year the men of the 101st had only a couple of weeks of preparation. In the weeks leading up to the actual drop, the 101st and the U.S Navy worked together on drills to ensure that the U.S paratroopers would receive cover fire from the Navy’s large guns.

General Taylor of the 101st received the orders to begin training up his men for a massive airborne assault of Normany sometime in April of 1944. However, to keep the orders secret the soldiers and junior officers of the 101st were kept in the dark up until only a few days before the night of the jump.

For weeks the men of the 101st trained for a nighttime jump operation. Finally, in early June the junior officers were alerted to their mission and told to plan for a nighttime operation on the early morning of June 4th. However, bad weather would push back the operation for a whole 24 hours.

When the 101st appeared for duty on the morning of June 5th they were greeted with hot food and told that they would leave that night for their operation. After sitting under the trees and being given their meal the 101st would begin to board their assigned C-47 planes at one of 6 RAF Airfields. 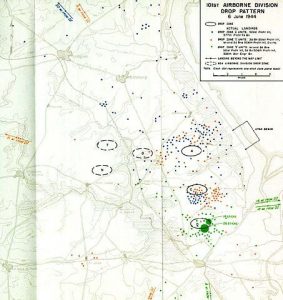 When the junior officers were given their tasks shortly before the operation they were amazed to learn just how complex the operation was. Getting nearly 7,000 soldiers and their gear into one of the most fortified locations in the world in the middle of the night and while maintaining formation was incredibly difficult.

In order to accomplish this, each officer would be given command over several sticks. Each stick was an individual C-47 plane. Each one of these planes held between 15-18 men of the 101st Airborne. In total there were 447 sticks that needed to be guided in the middle of the night to one of three drop zones.

The first drop zone was assigned to Zone A. This landing zone was directly behind Utah Beach and the teams landing there were tasked with setting up supporting artillery, destroying barracks, and capturing escape routes of German soldiers. Of these men was Lt. Col. Cole who was awarded the medal of honor for leading his men in a bayonet charge to break a fortified German position in the French city of Carentan.

The second drop zone was assigned to Zone C. The teams landing at this zone were tasked with protecting the right flank of the landing troops on the beaches only miles away. This zone came under extremely heavy anti-aircraft flak gunfire and lost 3 of the 81 assigned C-47’s before even reaching the landing zone. On top of this, the men assigned to zone c would be heavily separated from each other due to intense cloud cover.

The third drop zone was designated as Zone D. The men assigned to this drop zone were tasked with securing bridges and lanes of advancement for the rest of the allied force. The men of zone D would come under heavy infantry and flak fire as they advanced to capture the la Barquette lock.

The main goal of the entire operation was to secure the left flank of the allied invasionary fleet. This was vital as if D-Day became a quagmire of an operation and slowed to a halt the German army could begin to close in on the position from the left flank. 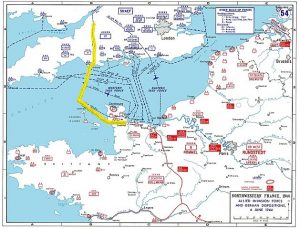 On the evening of June 5th the 7,000 U.S paratroopers boarded their planes and took off from England. The flight path of the 101st would have them approaching from the western side of the beaches of Normandy.

This flight path was thought to provide the best coverage and give the German’s the least amount of time to react to the invasion. However, it also positioned the 101st to be at risk of jumping into heavy clouds and wind.

Further, the western approach would expose the 443 C-47 Douglas troop planes to more gunfire as they flew past 3 heavily fortified Channel Islands and then 3 large German fortified positions outside Carentan.

The flight path of the 101st directly put them into harm’s way but if successful would cut off any attempt by other German armies in the east of Normandy from reinforcing the beaches of D-Day. 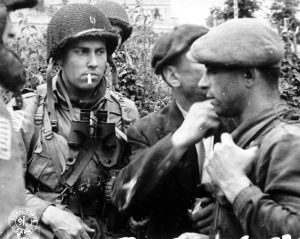 With the mission briefed and the men fed and equipped on the late night of the 5th of July the 101st boarded their planes at 2230 or 10:30 pm. Slowly hundreds of aircraft began to fill the sky over RAF airfields in southern England.

While the 101st was over England their planes would use full lighting to signal to other craft. In order to fly in formation, the first planes in the air would circle the airfield and fall into formation once the other ‘sticks’ were in the air.

After the C-47’s and the men of the 101st were in formation the entire operation flew southwest out over the English channel. The entire operation would have to be flown under 500 ft across the channel to avoid German radar from noticing them.

Once the 101st was out over the English channel all navigation lights were turned off except for dimly lit rear-facing formation lights. Around midnight the 101st began to encounter flak gunfire from the Nazi-held islands in the channel. Shortly after that, the entire operation was above western Normandy. At this point, the 101st split into three groups that were designated to land at one of the 3 landing zones.

The weather over Normandy was awful. The 101st encountered a dense fog and winds that scattered their paratroopers across the different jump zones. The dark night and lack of lighting also contributed heavily to the disarray of the paratroopers landing.

Some men of the 101st would never hit the ground as they left their aircraft and were swept by the wind into a hail of German gunfire. Other men would land miles away as they attempted to steer their parachutes to the wrong drop zone. 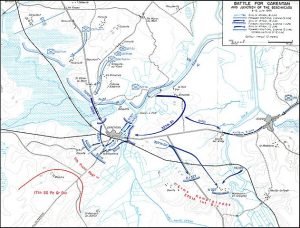 When the men of the 101st hit the ground they found that they were miles away from their objectives and highly disorganized. The entire division had been swept by high winds through dense fog and was now scattered across enemy land on a pitch black Normandy night. In spite of this, the 101st had a set series of objectives they needed to accomplish to pave the way for the large amphibious assault coming in just hours.

There were three objectives assigned to the 101st in Mission Albany. First, the 101st was to secure all exit routes off Utah Beach for the nearly 20,000 American troops landing there. Second, the 101st would destroy coastal batteries and barracks from behind to help ease combat operations on D-Day. Third, the entirety of the 101st would provide a barrier to protect the southern flank of VII Army Corp.

After landing each stick of about 18 men was assigned to pursue each of these objectives. However, due to the disorganized nature of the landing it took the 101st nearly 4 days to secure most of its objectives instead of the 1 it was expected to take.

With the destruction of the bridge crossings over the Douve now all German advances would have to proceed through the city of Carentan. As such this became a massive bottleneck that the 101st and 2nd Armored Division would have to defend.

For nearly 8 days after D-Day the city of Carentan was the site of a pitched battle between American and Nazi troops over who should hold the river crossing over the Douve. In the end, the Americans won the battle and secured the left flank of the D-Day invasionary force.

After the battle of Carentan and the quasi-success of Mission Albany, the 101st went into a defensive role for the remainder of the Normandy invasion. 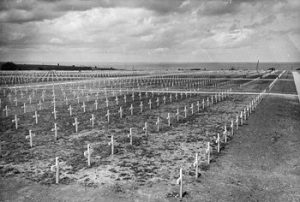 However, the role these men played in securing the route for the landings on Utah Beach paved the way for the rest of the Normandy Invasion. Several vital roads and crossings were secured and maintained allied control because of the 101st and their sacrifice.

On top of this, the 101st held back several waves of German attacks at the river crossing at the city of Carentan from June 8th-12th. The Battle of Carentan saw a bayonet charge on June 10th for which Lt Col. Robert G. Cole was later awarded the Medal of Honor. This battle prevented a German counterattack which would have caused significant casualties among the American troops landing at Utah beach.

While Mission Albany took its main objectives within the first hours of D-Day it took four more days to finally finish its mission of securing the left flank from a German counterattack. After four days the 101st successfully completed its mission and would take up a defensive position for the remainder of the Normandy Invasion.

The legacy of Mission Albany is vital to understanding the events of D-Day and Utah Beach. The 101st played a major role in securing and protecting the foothold from which the allied force could liberate France and push into Germany.

Mission Albany is a hidden part of the D-Day invasion. Many people are not aware of just how important this operation was to secure the far western flank of the invasion from a counter-attack from German armies stationed further east in France. Speed was the major factor in the success of the operation and within 1 hour the 101st had successfully jumped into a dense fog over Normandy.

Nicklaus Bobertz is a professional historian who runs, writes, and owns a history website called The History Ace that aims to provide easy answers to hard history questions.