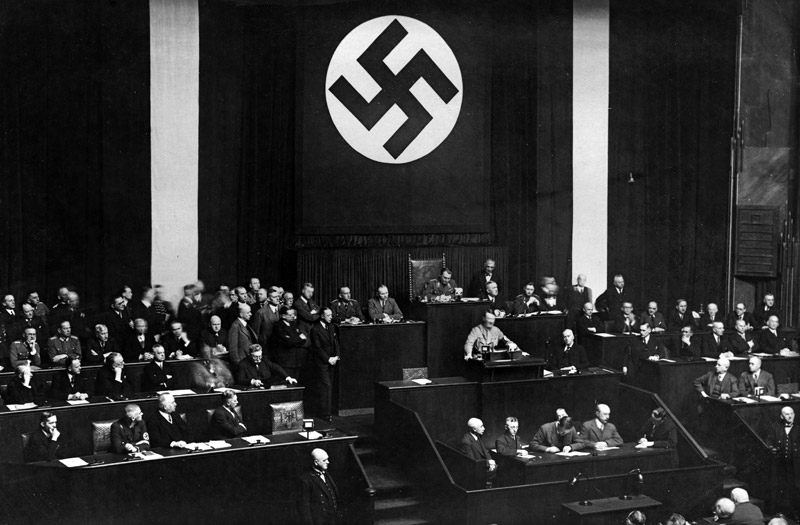 The Enabling Act (Ermächtigungsgesetz) of 1933 gave the German Cabinet power to enact laws without the involvement of the Reichstag and the Reichsrat, the legislative bodies of the Weimar government. It gave Adolph Hitler complete and absolute power over Germany.

The passage of the Enabling Act required Hitler to gain support from a quorum from a super-majority of the entire Reichstag; this process was made easier by nearly all Communist and some Social Democrat deputies being arrested under the Reichstag Fire Decree, which suspended civil liberties after the burning of the Reichstag under the auspices of the beginning of a Communist revolution. But to win the rest of the votes, he needed to convince religious parliamentarians that Germany’s religious life would be kept secure and that its civil society would not vanish.

Immediately before and after the opening of parliament, Hitler negotiated with the Center Party to get their support for the Enabling Act, which needed a two-thirds margin to pass. The legislation set aside parts of the Weimar Constitution, granting Hitler and his cabinet the right to rule by decree. Hitler personally negotiated with the leaders of the Center Party on March 20 and 22, promising that he would respect their rights and freedoms. He gave the following assurances to entice them to vote for the Enabling Act:

The promises helped secure the Center Party’s votes for the Enabling Act. Unfortunately for the Center Party, Hitler would use the power they bestowed on him to violate every one of these promises.

Text of the Enabling Act

The Reichstag has enacted the following law, which is hereby proclaimed with the assent of the Reichsrat, it having been established that the requirements for a constitutional amendment have been fulfilled:

Laws enacted by the government of the Reich may deviate from the constitution as long as they do not affect the institutions of the Reichstag and the Reichsrat. The rights of the President remain unaffected.

Treaties of the Reich with foreign states, which relate to matters of Reich legislation, shall for the duration of the validity of these laws not require the consent of the legislative authorities. The Reich government shall enact the legislation necessary to implement these agreements.

This law enters into force on the day of its proclamation. It expires on 1 April 1937; it expires furthermore if the present Reich government is replaced by another.

Another reason Hitler needed to reassure Germans in 1933 that his regime supported Christianity was to deflect growing unease over the anticlerical elements of the Nazi Party. By early 1933, German Catholic bishops had even banned Catholics from joining the Nazi Party (though this ban was lifted in late March 1933). To allay the growing criticism of Nazism as anti-Christian in 1933, Hitler stressed his regime’s commitment to Christianity. In his first radio speech to the nation after becoming chancellor, Hitler promised to protect Christianity, since it was the basis for Germany’s morality and family life, though in the speech, he did not explicitly claim that he or his party was Christian.

Indeed, most of his speeches between 1933–34 that mentioned his support for Christianity stopped short of professing any personal faith in it or Jesus. The closest he came during that time to professing Christian faith publicly was during a mid-February speech in 1933. As in his 1922 profession of faith, he was responding to criticism from the Center Party that Nazism was a danger to Christianity. Hitler countered this opposition by proclaiming that with his regime “Christians and not international atheists” were leading the nation.

Even this was not a clear-cut profession of personal faith, though it implied he was a Christian. In his speech to the German parliament on March 23, 1933, he acknowledged the Christian churches as important institutions in the preservation of the German people, and he called it the basis of morality; still, he stopped short of identifying himself or his party as essentially Christian.

A Comprehensive Guide to Adolph Hitler