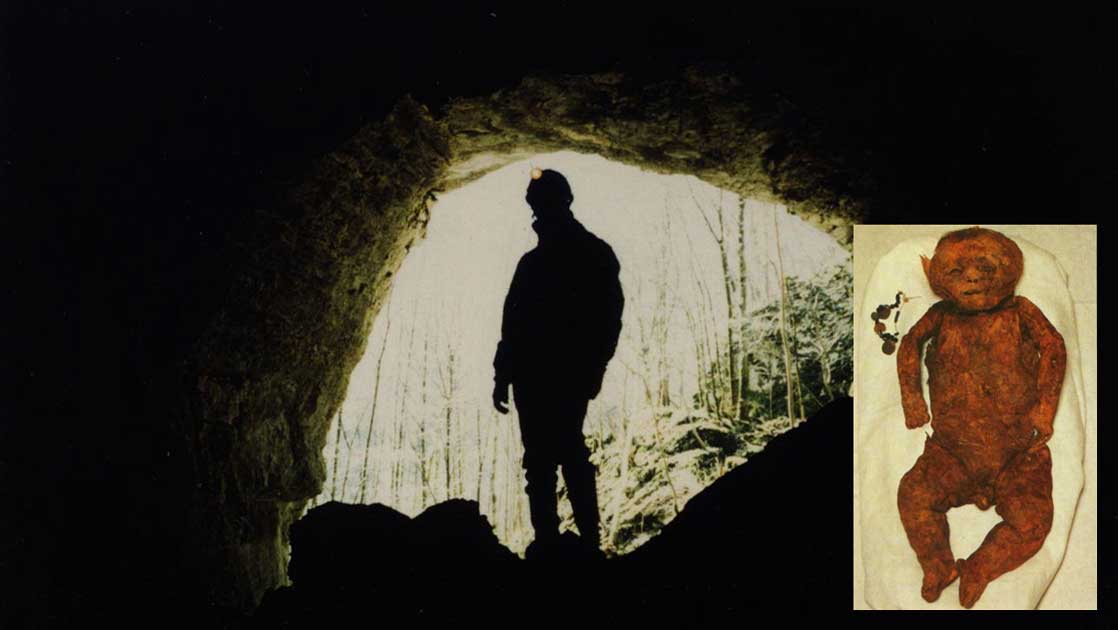 When archaeologists found a cache of medieval mummies in a Lebanese cave, the amazing discovery took their breath away. The remarkably well-preserved bodies of eight people who were buried in Qadisha Valley opened the gates to a forgotten story. Imagine this meeting of living researchers and people who died centuries ago – although the faces of the deceased were still recognizable, their names and companions were already long gone.

The fascinating mummies were brought to light by a team of archaeologists and speleologists (specialists of caves) from the Groupe d’Etudes et de Recherches Souterraines du Liban- GERSL in 1991. During explorations in the ‘Asi-al Hadath cave, they found the unique remains of people who had lived in this area almost eight centuries ago. The researchers believe the burial had been made around 1283 AD and the mummies were the remains of Maronite people. The mummies from the cave are the first, and probably only, of their kind found in Lebanon. The incredibly beautiful artifacts and mysterious story of the people whose burials were discovered in ‘Asi-al-Hadath Grotto opened a new chapter on a story that had long been forgotten. Location of Main Sites in the Kadisha Valley. (Public Domain) Hadath is located on the left.

The cave is located in Hadath-El-Gibbet and it seems to have been a good space to live in in the past. There is a manmade water reservoir near the cave, meaning that people may have had a settlement there. Moreover, the grotto also has two chambers which may have been inhabited. Finding the Maronite mummies was different than the discoveries of Egyptian mummies and many other ancient remains. The people who were buried in the cave had been naturally mummified, which made them very lifelike. The bodies’ state of preservation was impressive. The cave allowed for natural mummification because there were few organisms that could destroy their flesh and the humidity was low. The first mummy the team found belonged to a baby girl. This discovery deeply touched their hearts. According to Guita G. Hourani:

”The shrouded body belonged to a four-month-old infant. Her discoverers named her Yasmine. Clothed and fully interred only 40 cm below ground, she was lying on her back alone in the grave, her head resting on a smooth stone. Yasmine was carefully wrapped in gauze by the team and transported from the grotto to the laboratory. Beneath her shroud, she wore three dresses -one blue, with a beige dress over it and a more elaborate dark beige dress embroidered with silk threads over both. Her head was covered with a headdress, under which she wore a headband made of silk. She was adorned with one earring and a necklace garnished with hand-blown glass pearls and two coin pieces dated to the era of the Sultan Mamluk Baybars. Found nearby were a darker lock of human hair, bay leaves, almonds, walnuts, garlic and onion peels (Gersl 1993: 38-40). Little Yasmine was introduced to the world as the first known mummy of her people.”

The baby had been buried with her mother. She was laid to rest in the same style the Lebanese bury mothers with infants today – with the baby placed at her mother’s left shoulder. Apart from the touching burial of the little baby, seven other people were found at the same site – four more children and three adults.

The bodies have been thoroughly examined and researchers are convinced that they were self-mummified, without any embalming or outside help.

Apart from the famous mummies, the cave also held a number of precious artifacts. For example, the baby named Yasmine was dressed in three dresses. One of them was blue, the second beige, and the last a dark beige decorated with silk thread embroidery. She also wore a beautiful silk headband. Moreover, the baby girl was buried with jewelry – one earring and a necklace with glass beads. She also had two coins from the rule of Sultan Mamluk Baybars placed alongside her remains. Moreover, researchers discovered textiles and unique wooden arrows characteristic to this period scattered inside the cave. Manuscript found in the cave praising the Lord. (Fair use)

The bones of several other people were also found in the cave. Their story remains unknown, but there is a suspicion that they all died around the same time.

Searching for the Truth

How did they all die? The Crusades may shed some light on this mystery. The city of Tripoli (not far from the cave) was one of the four major cities in the Crusaders’ kingdom of Jerusalem and there was a great deal of turmoil during their occupation of the area. It is generally believed that these people were hiding from the Crusaders when they met their demise. However, this is an assumption and the cause of their deaths is still questioned today.

This post is from Ancient-Origins.net, which highlights the very latest archaeological findings, peer-reviewed academic research and evidence, as well as offering alternative viewpoints and explanations of science, archaeology, mythology, religion and history around the globe.

Medieval Farming and the Farming Year: How Did It Work?