The Last Fighter Pilot: An Account of the Final Combat Mission of World War Two 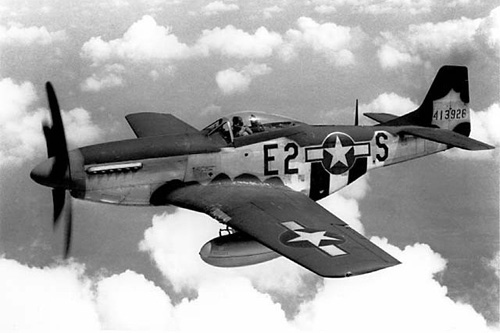 The following is an account of Captain Jerry Yellin, who flew the last combat mission of WWII on the morning of August 15, 1945, out of Iwo Jima. From April to August 1945, Yellin and a small group of fellow fighter pilots flew dangerous bombing and strafe missions over Japan. Even days after America dropped the atomic bombs—on Hiroshima on August 6 and Nagasaki on August 9—the pilots continued to fly. Though Japan had suffered unimaginable devastation, the emperor still refused to surrender.

A full account of Yellin’s war-time experience can be found in the book The Last Fighter Pilot: The True Story of the Final Combat Mission of World War II.

The P-51s’ mission that day started out well.

Cruising above the Pacific under the morning sun, the Americans had approached the Japanese coastline without incident. Jerry wondered how many more missions like this he would have to fly. They’d all thought the war was over, but now, here he was again, heading to strike a stubbornly resistant enemy.

But down below, in the nation they were about to attack, a philosophical battle was raging on whether to surrender or fight on. The “Big Six”—the six military officers running Japan—had been split by a vote of 3-3 on when and how to end the war with honor. In general, hard, passionate divisions of opinion existed among the Japanese military: some of the older officers wanted to surrender to prevent the destruction of Japan, while others wanted to fight on to the death and kill as many Americans as possible.

The previous night, while another 300 American B-29s strafed Japan again, a group of rogue Japanese officers had started a coup against Prime Minister Suzuki and Emperor Hirohito. The officers burned the prime minister’s office and surrounded the Imperial Palace, hoping to kidnap the emperor, all in an effort to prevent Japan’s leadership from thinking about surrendering. For these officers, and for so many of the Japanese people, surrender was not an option. There was glory in death, but only shame in surrender; Japan, for its part, had never been invaded or lost a war in its history.

Fortunately for the rest of the world, the coup did not succeed. A group of senior Japanese officers talked the insurgents off the ledge, convincing them that there was nowhere to go. Bu while the revolt ended, the war did not, and so, with the shoreline of the enemy territory coming into view and Phil Schlamberg, his dear friend and fellow pilot, on his wing, Jerry knew it was time to go back to work.

On Jerry’s order, al the planes in his squadron dropped their external fuel tanks over the ocean, then started their familiar aerial trek over the great, snow-capped peak of Mount Fuji. As of yet, there had been no radio signal with the word “UTAH,” signaling the end of the war.

As the Americans approached the Japanese capital, they began to identify targets. Within minutes, they swooped down over airfields and attacked despite heavy ground fire. Tracer bullets flew up from the Japanese guns as the Severity-Eighth made multiple passes at each target. Phil stayed tight on Jerry’s wing, just as instructed.

After strafing the last airfield, Jerry checked his fuel gauge and saw he was still in good shape. But when one of the pilots radioed that his tank had reached the ninety-gallon mark—the amount a Mustang needed for the return flight—it was time to pull up and begin plotting the course back to Iwo Jima.

Jerry looked over at Phil, who was still on his wing, and give him a thumbs up.

Phil looked back and returned the gesture.

Confidence. Maybe it was working.

With the battle of Tokyo complete, Jerry set his course back out to the ocean and banked to the south. The three other Mustangs in Jerry’s squadron returned with him. A few moments later, as they approached the coast where they would rendezvous with the navigational B-29s, they neared a cloud cover in front of them, often the case when approaching the atmospheric temperature inversions near the coast. With Phil still tight on his wing, Jerry led the four Mustangs into the cloud bank. Flying at an altitude of about 7,000 feet, Jerry focused his eyes on his navigation instruments, as the interior of the white, puffy clouds blocking his view of everything else.

But when the Mustangs emerged on the other side of the clouds, a devastating reality soon surfaced. Phil was gone. Most likely, he had been brought down by antiaircraft bullets fired into the clouds. There was no sign of him.

Jerry was devastated. When he landed at Iwo Jima, meanwhile, he learned something else: the war was over. The emperor had announced Japan’s surrender three hours earlier, while Jerry and his flight were still over Japan. The code word UTAH had been broadcast to U.S. aircraft over the country, but the word had not reached the planes of the Seventy-Eighth until they landed.

It was a surreal feeling as Jerry climbed out of his plane and jumped down to the airfield, standing on a once-bloody Pacific island. Now, suddenly, it was a world at peace. The men of the Seventy-Eighth had a saying, “Alive in ’45.” That had been their goal, and now it was their reality. They were going home, alive.

As Jerry walked away from his plane, another realization hit him: he had just flown the final combat mission of the war, and Phil was the final combat death of the great war. One day, after Jerry had time to collect his emotions and his thoughts, the great historical significance of the mission he’d just flown would sink in. But for now, one thought consumed his mind.

At last, it was time to go home.