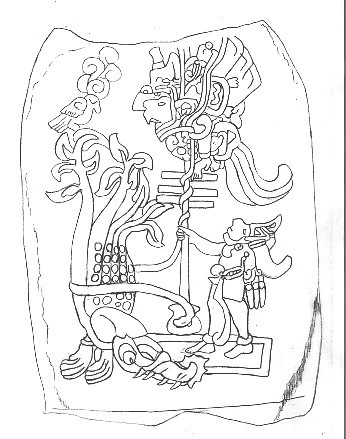 The Maya had many myths; one of their most important and favorite myths concerned the Hero Twins, a pair of demi-gods who became heroes and tricksters. The myth is ancient going back to Pre-Classic era and probably into archaic times. The Twins appear on many monuments, painted pottery and cave walls. Their names are embedded into the Maya calendar as day signs, signifying the centrality and importance of the myth.

The entire myth of the Hero Twins is too long to provide in this short article. However, here’s a brief synopsis:

The twins’ father and uncle were also twins, and great ball players. They were called to the Underworld, Xibalba, by the gods of the dead, the Death Lords, who tricked them and then killed them in sacrifice. Nevertheless, through magical means, the decapitated head of Hun Hunahpu managed to father the twins on Xquic, a goddess of Xibalba. Xquic gave birth to the Hero Twins, Hunahpu and Xbalanque.

The Hero Twins also became great ball players, but they were noisy and angered the Lords of Xibalba, who called them to the Underworld for a ball game. First the Twins had to successfully pass many magical tests, which the twins did because they knew the story of their father and uncle. The Death Lords tried to trick them repeatedly, but each time the Twins outwitted them. The boys knew they had to die to achieve their final goal of achieving godhead themselves, so they let the Death Lords kill them. The Death Lords sacrificed the boys and ground them to bits. They threw the bits into the river. There, the boys regenerated, becoming first catfish, then boys again.

The Hero Twins have many adventures as outlined in the Popol Vuh, the great book of the Quiche Maya of Guatemala. In one, they manage to kill a bird demon that was setting itself up as a god to be worshipped. In another, they bring their father, Hun Hunahpu, back to life then make him the Maize God. The sky gods made the Twins the rulers of the Earth. They were then turned into the Sun and the Moon. Maya rulers claimed to be descended from the Hero Twins, giving them the right to rule.

Throughout the myth tale, the Twins play the ball game against the Death Lords. The Maya ball game could be played just for fun, but it also held deep religious meaning for the Maya, who saw it as the eternal battle of good versus evil.