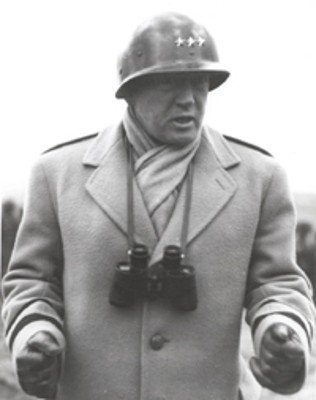 SOLDIERS OF THE THIRD ARMY, PAST AND PRESENT During the 281 days of incessant and victorious combat, your penetrations have advanced farther in less time than any other army in history. You have fought your way across 24 major rivers and innu-merable lesser streams. You have liberated or conquered more than 82,000 square miles of territory, including 1,500 cities and towns, and some 12,000 inhabited places. Prior to the termination of active hos-tilities, you had captured in battle 956,000 enemy soldiers and killed or wounded at least 500,000 others. France, Belgium, Luxembourg, Germany, Austria, and Czechoslovakia bear witness to your exploits.

All men and women of the six corps and thirty-nine divisions that have at different times been members of this Army have done their duty. Each deserves credit. The enduring valor of the combat troops has been paralleled and made possible by the often unpublicized activities of the supply, administrative, and medical services of this Army and of the Communications Zone troops supporting it. Nor should we forget our comrades of the other armies and of the Air Force, particularly of the XIX Tactical Air Command, by whose side or under whose wings we have had the honor to fight.

In proudly contemplating our achievements, let us never forget our heroic dead whose graves mark the course of our victorious advances, nor our wounded whose sacrifices aided so much in our success.

I should be both ungrateful and wanting in candor if I failed to acknowledge the debt we owe to our Chiefs of Staff, Generals Gaffey and Gay, and to the officers and men of the General and Special Staff Sections of Army Headquarters. Without their loyalty, intelligence, and unremitting labors, success would have been impossible.

The termination of fighting in Europe does not remove the oppor-tunities for other outstanding and equally difficult achievements in the days which are to come. In some ways the immediate future will demand of you more fortitude than has the past because, without the inspiration of combat, you must maintain—by your dress, deportment, and efficiency—not only the prestige of the Third Army but also the honor of the United States. I have complete confidence that you will not fail.

During the course of this war I have received promotions and decorations far above and beyond my individual merit. You won them; I as your representative wear them. The one honor which is mine and mine alone is that of having commanded such an incomparable group of Americans, the record of whose fortitude, audacity, and valor will endure as long as history lasts.