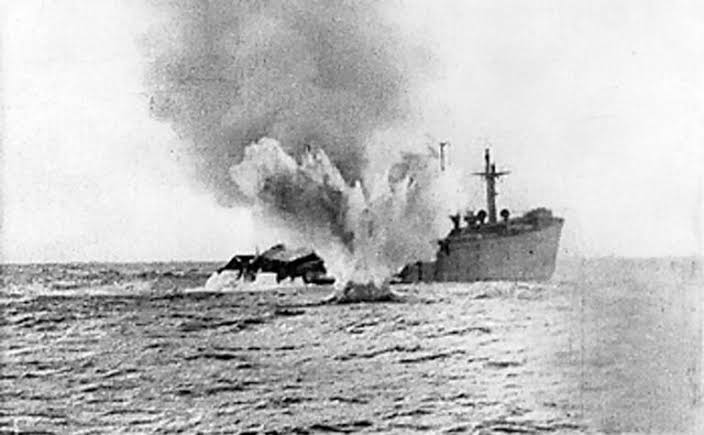 Unrestricted submarine warfare in WW1 was the practice of using submarines to attack and sink all forms of enemy shipping, whether they are military or civilian.

On February 4, 1915, the German government announced that it would retaliate against the “illegal” British blockade of German vessels:

All the waters surrounding Great Britain and Ireland, including the whole of the English Channel, are hereby declared to be a war zone. From February 18 onwards every enemy merchant vessel found within this war zone will be destroyed without it always being possible to avoid danger to the crews and passengers. Neutral ships will also be exposed to danger in the war zone, as, in view of the misuse of neutral flags ordered on January 31 by the British Government, and owing to unforeseen incidents to which naval warfare is liable, it is impossible to avoid attacks being made on neutral ships in mistake for those of the enemy.

The reference to “the misuse of neutral flags” recalled the occasional British practice of decorating their ships with the flags of neutral countries to shield them from attack. By early 1915 Churchill was encouraging such a policy, and crews were being urged to don civilian clothing in order to lure German subs to the surface—where they would then be destroyed. For that reason, and because of the general danger that always exists during wartime, even neutral ships could not be assured of their safety when traveling through the war zone. Thus both the British and, in retaliation, the Germans, were guilty of violating the rights of neutral nations.

Woodrow Wilson refused to draw any connection between the German warning of submarine warfare and the British hunger blockade of Germany. His sympathies were always with the British. British violations of international law were met with little more than a slap on the wrist. So pro-British was the American administration that on one occasion, American ambassador to Great Britain Walter Hines Page read an American dispatch to British officials and then sat down to help them devise a reply to his own government! German misdeeds on the high seas, on the other hand, received immediate condemnation from Washington. As soon as the German policy on submarine warfare was announced, Wilson replied that the German government would be held strictly accountable for the loss of American vessels or lives on the high seas.

The realities of submarine warfare became particularly evident on March 29, 1915, when the British steamship Falaba was sunk by the Germans. According to British propaganda, the German U-boat captain had fired without warning, killing some 110 people, including one American. It was later discovered that the German captain had given the Falaba three warnings, and had fired only after a British warship had appeared on the horizon. The Falaba was also carrying some thirteen tons of ammunition, which helped to account for the severity of the disaster. Nevertheless, Wilson sent a note to the German government spelling out his policy that the United States had the duty to protect American citizens sailing on ships flying belligerent flags.

The fact that British merchant ships were increasingly armed and prepared to take offensive action against German submarines put America in an awkward position. From early on, British ship captains had been warned by the admiralty that they would be prosecuted if they quietly surrendered their ships to the enemy. Submarines, which were notoriously frail, should be rammed or fired upon when possible. And since Churchill had said that the survivors of British attacks on German submarines would be treated as felons rather than as prisoners of war, U-boat captains understood very well that they could face death even if they managed to survive an attack.

Even Secretary of State Lansing could perceive the absurdity of the situation. The fact that British merchant ships were armed and capable of destroying submarines made it “difficult to demand that a submarine shall give a warning and expose itself to the heavy guns carried by some of the British passenger vessels.” Traditional “cruiser rules,” now being applied to submarines, required them to give fair warning to an unarmed merchant vessel in their sights. The submarine could require that the ship submits to a search; if it turned out to be a belligerent merchant ship, the people on board became hostages and the ship itself, along with its cargo, could be confiscated or sunk.