The Battle of Vicksburg: Assaulting & Besieging the Fort 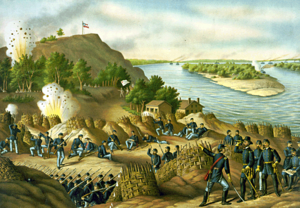 Wasting no time, Grant immediately moved on Vicksburg battle with all three of his corps and ordered the first assault at 2 p.m. on the 19th. Riding the momentum of his string of successes, Grant wanted to catch the defenders before they had an opportunity to fully organize. Although that assault tightened the noose around the town and gave Grant’s troops covered and advanced positions, the Union’s nine hundred casualties (to the rebels’ two hundred) indicated that capture of the town by assault would be difficult. Nevertheless, Grant decided on a second assault. Johnston’s army threatened in his rear, and Grant wanted to avoid bringing in reinforcements. His soldiers, moreover, believed they could carry the town’s fortifications, and he wanted to give them an opportunity to try. On May 22, all three corps launched simultaneous attacks but were repulsed. In response to dubious claims of success by McClernand, Grant sent him reinforcements and continued attacks elsewhere. These assaults failed, however, and left Grant with 3,200 casualties to the defenders’ five hundred. So Grant settled in for a siege.

In his memoirs, Grant expressed his regrets for the May 22 assault but explained his reasons for doing so:

We were in a Southern climate, at the beginning of the hot season. The Army of Tennessee had won five successive victories over the garrison of Vicksburg in the three preceding weeks. . . . The Army of Tennessee had come to believe that they could beat their antagonist under any circumstances. There was no telling how long a regular siege might last. As I have stated, it was the beginning of the hot season in a Southern climate. There was no telling what the casualties might be among Northern troops working and living in trenches, drinking surface water filtered through rich vegetation, under a tropical sun. If Vicksburg battle would have been carried in May, it would not only have saved the army the risk it ran of a greater danger than from the bullets of the enemy, but it would have given us a splendid army, well equipped and officered, to operate elsewhere with.

General Fuller pointed out that Grant had seven reasons to attack rather than simply besiege Vicksburg: (1) Johnston was gathering an army in his rear, (2) a quick victory would allow Grant to attack Johnston, (3) Union reinforcements would be required to perfect the siege, (4) the troops were impatient to take Vicksburg, (5) the weather was getting hotter, (6) water was scarce, and (7) the men were not anxious to dig entrenchments. Although he has been criticized in hindsight for initiating the May 22 assault, Grant had sufficient reasons to justify his attempt to take the town by assault. Even though his casualties that day were five hundred killed and 2,550 wounded, Grant’s casualties in the three prior weeks of fighting had been a mere seven hundred killed and 3,400 wounded. Cumulatively, these casualties were a fair price to pay for having struck at the heart of the Western Confederacy and trapping a thirty-thousand-man army in the citadel on the Mississippi, the capture of which would culminate in an extraordinarily significant Union victory.

From afar, Robert E. Lee gave President Davis some belated advice on the Vicksburg battle situation and paid a tribute to Grant’s speedy execution of his campaign. On May 28, barely more than a week after downplaying Grant’s chances for success in Mississippi, Lee revealed a fresh-found concern. He wrote, “I am glad to hear that the accounts from Vicksburg battle continue encouraging—I pray & trust that Genl Johnston may be able to destroy Grant’s army—I fear if he cannot attack soon, he will become too strong in his position—No time should ever be given them to fortify. They work so fast.”

After the May 22 attack on Vicksburg, Grant had his troops dig in for a sustained siege. They dug trenches and protected them with sandbags and logs while Union sharpshooters kept the besieged defenders from interfering with the construction. With only four engineering officers in his army, Grant directed every West Point graduate to supervise the siege line construction. With Johnston assembling an “Army of Relief,” consisting of thirty-one thousand troops from all over the South, to trap him, Grant received reinforcements of his own from Missouri, Tennessee, and Kentucky. His army grew from fifty-one thousand to seventy-seven thousand. As reinforcements arrived, Grant used them to cut off all communication out of Vicksburg battle south along the Mississippi, secure the countryside back to the Big Black River, and destroy bridges across that river, protecting his army from attack by Johnston’s force from the east.

Grant’s gambling campaign left him somewhat vulnerable to a Confederate counterattack between May 22 and June 8, when the first division of Union reinforcements arrived. During that interval, Grant had about fifty-one thousand troops sandwiched between Pemberton’s 29,500 and Johnston’s 22,000 (30,000 by June 3). But between Johnston’s temerity and the lack of Confederate coordination, Grant was spared an attack.

In Virginia, Lee learned that Grant had reached the Yazoo and optimistically speculated, “The enemy may be drawing to the Yazoo for the purpose of reaching their transports and retiring from the contest, which I hope is the case.” As Kenneth P. Williams notes, “Grant’s persistence during the winter and his brilliant campaign behind Vicksburg had taught Lee nothing about the character of the soldier he would a year later have to face.” More importantly to Grant, his president recognized the greatness of what he had accomplished. On May 26 Lincoln wrote, “Whether Gen. Grant shall or shall not consummate the capture of Vicksburg, his campaign from the beginning of this month up to the twenty-second day of it, is one of the most brilliant in the world.”

As Grant’s troops advanced their lines, particularly on the eight roads into Vicksburg battle, he at last found a means of ridding himself of the conniving McClernand. McPherson and Sherman read in Northern newspapers that McClernand had issued a congratulatory order to his troops that effectively disparaged their troops. The offended generals complained to Grant, who relieved McClernand of command on June 18 for publishing unapproved orders. When McClernand received the relief order, he exclaimed “Well, sir, I am relieved,” and then, noting a hint of satisfaction on the delivering officer’s face, he added, “By God, sir, we are both relieved!” Major General Edward Ord replaced McClernand as corps commander.

On June 22, Grant learned that some of Johnston’s cavalry had crossed the Big Black River and now threatened his rear. Grant immediately put Sherman in charge of the half of his army protecting against such an attack and readied other forces to reinforce Sherman if needed. With thirty thousand men and seventy-two guns, Sherman’s “Army of Observation” guarded all of the Big Black River crossings. Johnston backed off. He may have been reluctant to attack Grant because Union scout and double-agent Charles Bell had personally told Johnston that Grant had eighty-five thousand troops (an exaggeration of more than twenty thousand at the time). Bell also had reported more accurately to Grant on Johnston’s own strength and disposition.

On June 25 and July 1, Union troops exploded mines in tunnels they had dug under the Confederate lines. Although these explosions did not afford the besiegers an opportunity to enter the city, they did force the defenders to further constrict their lines. For forty-seven days, the Confederate forces and Vicksburg residents were subjected to continuous Union fire from ships and shore that may have totaled eighty-eight thousand shells and killed perhaps twenty civilians. With deserters reporting that morale and food supplies were running low in Vicksburg and with his trenches having been advanced as far as possible, Grant planned an all-out assault for July 6. Ironically, Johnston had chosen that same date for his own long-delayed assault on Grant.

For six weeks, Grant’s soldiers dug day and night in order to advance their lines, set off explosions beneath the rebel defenses, and improve their prospects for a final assault. Grant rejected some officers’ views that another assault should have been launched before the one planned for July 6. After May 22, the siege of Vicksburg was a relatively bloodless one for Grant’s army, even though a siege is usually costlier for the besiegers than the defenders. Between May 23 and July 3, 104 of Grant’s men were killed, 419 wounded, with seven missing, while they killed more than 805 and wounded more than 1,938 of the enemy, of whom at least 129 were missing.