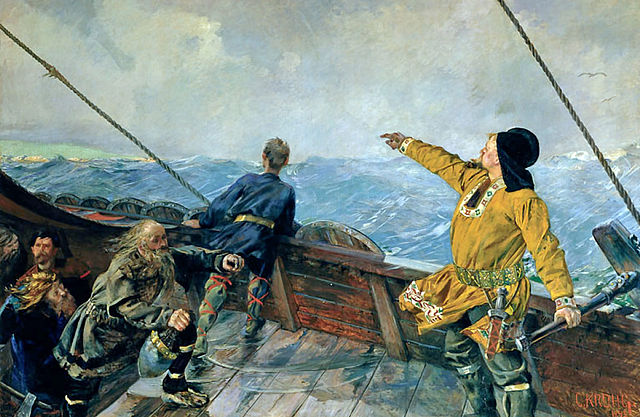 Most Viking journeys followed coasts or rivers, yet Vikings also possessed the ability to sail out of sight of land across the sea to new lands. This ability astonished their contemporaries, who were in awe of these fearless mariners and warriors. How did the Vikings cross the Atlantic Ocean to found the colonies of Iceland, Greenland and Vinland on present day Newfoundland?

To a certain extent, scholars know how the Vikings navigated. Sagas, written later but describing events a few centuries earlier, relate how these sea crossings took place. The Vikings had a rich marine tradition going back centuries. This intimate knowledge of coasts, currents, navigation marks, whales and sea birds all became part of a mental map the Vikings formed of their journeys.

The Vikings didn’t have any of the navigation tools we have today, although today scholars speculate they may have used simple tools to determine latitude. We’ll describe these tools later.

Viking mariners navigated by their five senses, practical knowledge and an intuitive sense of where they were on their mental map. Using their senses, Vikings would note navigation marks—the highest hills or a weirdly shaped rock. They could see whales feeding in certain currents. Experienced mariners could hear birds calling and waves breaking on shore or rocks. They could taste if fresh water was flowing into the sea. Experienced sailors can smell land in a sea breeze, and feel the prevailing wind on their skin.

Vikings also used a plumb bob—a weight on the end of a line—to determine water depth. They might also have used a simple latitude finder, which was a circle of wood with a gnomen sticking up from it that floated in a bucket. The sun’s rays cast the gnomen’s shadow on the circle of wood. This tool helped the Vikings determine their latitude.

Viking sagas mention sun stones—special crystals that can help determine the sun’s direction even on cloudy days. None, however, has ever been found at Viking archeological sites. A crystal was found in a shipwreck from Elizabethan times near the Channel Islands. The crystal, which turned out to be Icelandic spar, was near other navigational tools in the wreck. Icelandic spar was found at a Viking site in Greenland. Could this crystal be the fabled Viking sun stone?