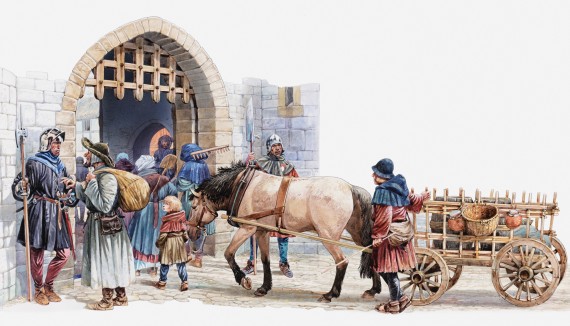 In the early Viking Age, no national kings existed. There were three broad social classes: the nobles or jarls, the middle class or karls and the slaves or thralls. And the medieval freemen were among the few who, over time, could move among classes, at least among the lower ones. As the Viking Age progressed, power began to centralize in the hands of a few strong leaders, who became the kings of Sweden, Norway and Denmark beginning in the 9th century. Kingship, however, didn’t become a strong centralizing force until later.

While these three classes might have seemed rigid, there were mechanisms for moving both up and down in social status. Medieval freemen might get into debt to the point where he might have to sell himself as a bondsman until he could pay off his debt. A slave might be allowed to sell the handicrafts produced in their free time and buy his or her freedom. He might then become among the medieval freemen, but he probably wouldn’t be able to improve his circumstances much from there.

Jarls, too, might become strong and rich enough to make himself a king, or they might lose much of what they owned and move down into the ranks of the karls. Jarls were rich, and held their wealth in property, number of followers, treasure, ships and estates. A jarl’s retainers or followers expected to be rewarded with good food, drink and clothing as well as with treasure and a share of land. Jarls protected the honor, prosperity and security of their followers. In return, the jarl’s retainers were expected to support him, go with him on raids and follow him into battle.

Within these three broad categories were many gradations and degrees. There were richer and poorer in each category. A man might be among the medieval freemen, for instance, but not own any property. He might be a tenant on a farm, working the land and doing farm work in exchange for room and board. Women generally took the same societal rank as their fathers, brothers or husbands.

Slaves, who were most often taken in raids, were the lowest rank of Norse society. They had hardly any rights. They were often put to death when they could no longer work. Slaves did the hardest work and probably received poor clothes and food. They could, however, save enough money to free themselves.

These three basic social ranks were ancient, created by the god Rigr or Heimdall, establishing the proper ordering of Norse society. As the Viking Age progressed, the same feudalism that was ordering societies in European nations filtered into the Norse lands, making the classes more rigid than they had been earlier.

Each of the Viking lands were slightly different than the others in terms of social rank. Iceland, for instance, had no kings or earls, although young Icelandic men might go off to serve one of the Viking kings as a retainer. Kings were not viewed as special or semi-divine in the Norse lands, but were considered strong, brave, crafty, generous and a good war leader. A story is told of a group of Vikings who met with Charles, king of the Franks. The Danish Vikings were ordered to kneel and kiss the king’s boot. The leader of the Danes refused. One of his followers, however, grabbed the king’s foot and raised it up to his lips to kiss, thus dangling the king upside down. Such was the Vikings’ attitude toward kings.