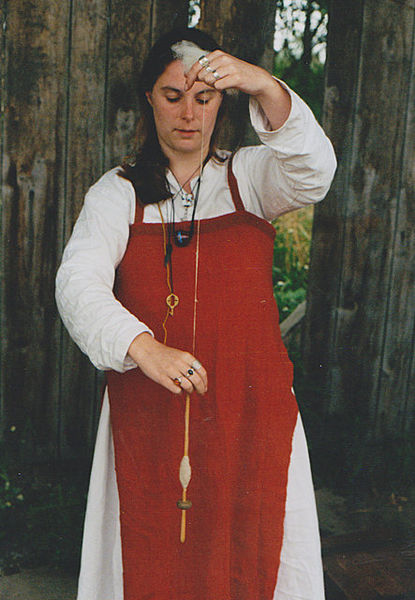 Within the male-dominated Viking society, women had a certain amount of personal power, depending on their social status. When Viking men were away from home—raiding, fishing, exploring or on trading missions—women in Viking society took over all the men’s work as well as doing their own. Women were valuable members of the society and it was shameful for a man to harm a woman.

Women’s role was domestic, taking care of the family, preparing food, laundry, milking cows, sheep and goats, making butter and cheeses, preserving food for winter, gardening, cleaning and the most time-consuming task of all, making the family’s clothes. Spinning, carding, weaving, cutting and sewing took a long time. It could take a Viking woman 35 hours to spin enough yarn for a day’s weaving, to give you some idea of how much time it took to make clothing.

Viking women married young—as early as 12 years old. By the age of 20, virtually all men and women were married. Life expectancy was about 50 years, but most died long before reaching 50. Only a few lived to 60.

Marriages were arranged by the parents of the young couple. A marriage was a contract between two families: the groom’s family paid a bride price to bride’s family when the couple was betrothed. At the marriage, the bride’s father paid a dowry. Since both families had a financial investment in the new couple, a marriage was as much a matter for the families as it was for the people involved.

Viking children did not go to school as we know it today. Rather, the boys learned all the men’s work, taught by their fathers, brothers and uncles. Girls worked along with their mothers and aunts learning how to cook, garden, take care of the domestic animals and make clothing. By the time they reached adulthood at 12 to 15, both boys and girls could effectively run a household and a farm.

As is always the case, there were exceptions to these general societal rules of behavior. When the men went to settle Iceland, Greenland and Vinland, women went with them. Vikings settled in England, Ireland and France as families. However, only men went raiding and trading while women stayed home and minded the farm.

Women in Viking society had more power than most other European women of the time. They could divorce their husbands, own some property and sell their own handicrafts. Some women became wealthy landowners. Others participated in trade—scales used for weighing silver used in trade have been found in women’s graves. Even a few weapons were found in female graves, giving the notion that some women were fighters along side of their men. Most women in Viking society, however, lived and worked in the domestic realm of the household.