Was Hitler a Christian? — A Look at the Sources

History » World War Two » Adolf Hitler » Was Hitler a Christian? — A Look at the Sources 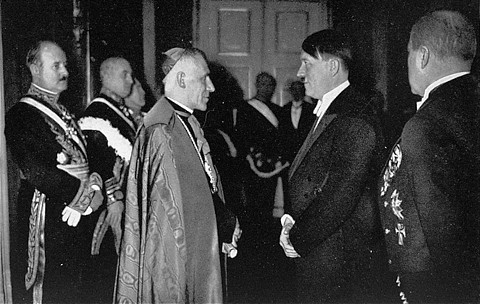 The following article on “Was Hitler a Christian” is an excerpt from Richard Weikart’s book Hitler’s Religion: The Twisted Beliefs that Drove the Third Reich. It is available to order now at Amazon and Barnes & Noble.

Was Hitler a Christian? This question has been asked by historians and World War Two aficionados for decades. During Hitler’s lifetime, some observers warned that he was the Antichrist. In 1942, Arthur Szyk, a Polish Jew living in the United States, drew a caricature of Hitler as the Antichrist bringing death and destruction to humanity. Many Christian leaders in the 1930s and 1940s, both within and outside Germany, recognized Hitler was no friend to their religion. In 1936, Karl Spiecker, a German Catholic living in exile in France, detailed the Nazi fight against Christianity in his book Hitler gegen Christus (Hitler against Christ). The Swedish Lutheran bishop Nathan Soderblom, a leading figure in the early twentieth-century ecumenical movement, was not so ecumenical that he included Hitler in the ranks of Christianity. After meeting with Hitler sometime in the mid-1930s, he stated, “As far as Christianity is concerned, this man is chemically pure from it.”

Was Hitler a Christian? Reasons to Believe

Many Germans, however, had quite a different image of their Führer. They rarely asked if Hitler was a Christian. Aside from those who saw him as a Messiah worthy of veneration and maybe even worship, many regarded him as a faithful Christian. Rumors circulated widely in Nazi Germany that Hitler carried a New Testament in his vest pocket, or that he read daily a Protestant devotional booklet. Though these rumors were false, at the time many Germans believed them.

Indeed, savvy politician that he was, Hitler often cultivated the image of being a Christian. One of the more spectacular examples was the striking photograph that Heinrich Hoffmann captured on April 23, 1932, as Hitler was exiting the Marienkirche (Mary’s Church) in Bremerhaven. In that photo, a bright cross is hovering directly over Hitler’s head, giving him a halo effect. This photo was included in Hoffmann’s popular book of Hitler photographs, Hitler wie ihn keiner kennt (Hitler as no one knows him). The caption reinforced the image: “A photographic chance event becomes a symbol: Adolf Hitler, the supposed ‘heretic,’ leaving the Marinekirche [sic] in Wilhelmshaven.”

Hoffmann’s claim that this was a “chance event” is rather suspicious, as the photo looks too good to be true. The caption, meanwhile, implied that Hitler was not a heretic, as some presumed, because here he was at church. The photo was such brilliant propaganda that the historian Richard Steigmann-Gall used it on the dust jacket of his 2003 book, The Holy Reich: Nazi Conceptions of Christianity, 1919 –1945, in which he tries to show the affinities of Nazism and Christianity. Apparently, it still convinces some that Hitler is a Christian.

In any case, sometime between 1935 and 1938, Hitler apparently decided that he no longer needed to pander to the Christian sensibilities of the German public. In the 1938 edition of Hitler wie ihn keiner kennt, Hoffmann altered the photo by removing the cross) (apparently, Hitler no longer wanted to be associated with this symbol). Hoffmann also changed the caption: “Adolf Hitler after sightseeing at the historic Marinekirche [sic] in Wilhelmshaven.” While Germans viewing the version with the cross would likely think Hitler was leaving a church service, the later caption made clear Hitler was not attending a worship service, but merely visiting a historic site.

Most historians today agree that Hitler was not a Christian in any meaningful sense. Neil Gregor, for instance, warns that Hitler’s “superficial deployment of elements of Christian discourse” should not mislead people to think that Hitler shared the views of “established religion.” Michael Burleigh argues that Nazism was anticlerical and despised Christianity. He recognizes that Hitler was not an atheist, but “Hitler’s God was not the Christian God, as conventionally understood.” In his withering but sober analysis of the complicity of the Christian churches in Nazi Germany, Robert Ericksen depicts Hitler as duplicitous when he presented himself publicly as a Christian.

Hitler’s anti-Christian outlook remained largely submerged before 1924, because—as Hitler himself explained in Mein Kampf— he did not want to offend possible supporters. In August 1924, while he was in Landsberg Prison, Hitler privately told Hess about having to camouflage his opposition to religion, just as he had to hide his enmity toward alcohol. Hitler had remained silent while Hess and fellow Nazis discussed their positions vis-à-vis the Protestant Church, but later he told Hess how he felt. Even though Hitler found playing a religious hypocrite distasteful, he dared not criticize the church, because he knew this might alienate people.

Hitler’s tirade against Christianity in Mein Kampf, including the threat to demolish it, diverged remarkably from his normal public persona. He was usually more circumspect, refraining from open criticism of Christianity. However, many of his colleagues testified that Hitler’s personal opinion about Christianity did not match his hypocritical public stance; Hitler, for his part, thought religion itself was hypocritical. According to Wagener, who accompanied Hitler from 1929 to 1933, Hitler honored Jesus as a great socialist but believed the Christian churches had completely perverted His teachings and were, in fact, teaching the exact opposite.

In reading through Goebbels’ Diaries, Hitler’s monologues, and Rosenberg’s Diaries, it is rather amazing how often Hitler discussed religion with his entourage, especially during World War II. He was clearly obsessed with the topic. On December 13, 1941, for example, just two days after declaring war on the United States, he told his Gauleiter (district leaders) that he was going to annihilate the Jews, but he was postponing his campaign against the church until after the war, when he would deal with them. According to Rosenberg, both on that day and the following, Hitler’s monologues were primarily about the “problem of Christianity.” In a letter to a friend in July 1941, Hitler’s secretary Christa Schroeder claimed that in Hitler’s evening discussions at the headquarters, “the church plays a large role.” She added that she found Hitler’s religious comments very illuminating, as he exposed the deception and hypocrisy of Christianity. Hitler’s own monologues confirm Schroeder’s impression.

Was Hitler a Christian? Reasons to Disbelieve

In fact, Hitler contemptuously called Christianity a poison and a bacillus and openly mocked its teachings. In a long diatribe ridiculing many core Christian teachings, Hitler told his colleagues that the Christian concept of heaven was insipid and undesirable. After scoffing at doctrines such as the Fall, the Virgin Birth, and redemption through the death of Jesus, Hitler stated, “Christianity is the most insane thing that a human brain in its delusion has ever brought forth, a mockery of everything divine.” He followed this up with a hard right jab to any believing Catholic, claiming that a “Negro with his fetish” is far superior to someone who believes in transubstantiation.

Hitler, in his own twisted mind, believed black Africans were subhumans intellectually closer to apes than to Europeans, so to him, this was a spectacular insult to Catholics. In February 1942, Hitler again scoffed at the basic teachings of Christianity, sarcastically relating the story of humanity from a Christian standpoint. He implied that God was responsible for original sin and commented that God’s method of redemption by sending his Son was a “murderous subterfuge.” Then, according to Hitler, when others did not accept these strange teachings, the church tortured them into submission. In the course of this anti-Christian diatribe, Hitler called the Catholic Church a form of idolatry and “Satanic superstition.”

Another theme that surfaced frequently in Hitler’s monologues of 1941–42 was that the sneaky first-century rabbi Paul was responsible for repackaging the Jewish worldview in the guise of Christianity, thereby causing the downfall of the Roman Empire. In December 1941, Hitler stated that although Christ was an Aryan, “Paul used his teachings to mobilize the underworld and organize a proto-Bolshevism. With its emergence the beautiful clarity of the ancient world was lost.” In fact, since Christianity was tainted from the very start, Hitler sometimes referred to it as “Jew-Christianity.” While Hitler often associated Jesus with Aryan traits and socialism, he consistently lambasted Christianity as Jewish and communist. He denigrated the “Jew-Christians” of the fourth century for destroying Roman temples and even called the destruction of the Alexandrian library a “JewishChristian deed.” Hitler thus construed the contest between Christianity and the ancient pagan world as part of the racial struggle between Jews and Aryans.

In the end, the evidence is preponderant against Hitler embracing any form of Christianity for most of his adult life. Was Hitler a Christian? No.

Even though he tried to palm himself off as a Christian when it served his political purposes, none of his friends and comrades considered him one. Even though he never officially left the Catholic Church, Schroeder claimed he promised to withdraw from the church immediately after the war to symbolize the dawn of a new historical era.125 All of Hitler’s close associates agreed with Schroeder, testifying that he was antagonistic toward Christianity. He admired the whip-wielding Jesus, whom he considered a fellow Aryan warrior fighting against the allegedly infernal Jews, but he had utter contempt for the Jesus who told His followers to love their enemies and turn the other cheek.

He also did not believe that Jesus’s death had any significance other than showing the perfidy of the Jews, nor did he believe in Jesus’s resurrection. In private conversations and monologues he railed at Christianity because it had followed the lead of that insidious Jewish rabbi Paul. Despite Hitler’s disingenuous public statements, and despite his esteem for (his anti-Semitic version of) Jesus, it is abundantly clear that Hitler did not consider himself a Christian.