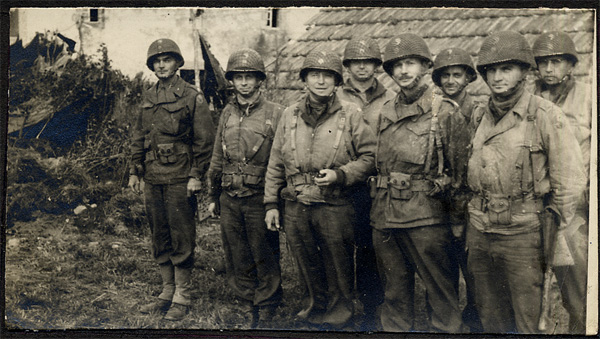 The following article on the 29th Infantry Division is an excerpt from Barrett Tillman’ D-Day Encyclopedia. It is available for order now from Amazon and Barnes & Noble.

The division was activated at Fort Meade, Maryland, in February 1941, Maj. Gen. Milton Reckford holding command for the first twelve months. Gerow then took over, and the 29th Infantry Division sailed from the East Coast in October 1942, becoming the first U.S. Army division to arrive in Britain. When Gerow was promoted to command V Corps in July 1943 he was followed by the flamboyant Charles H. Gerhardt. By then the Twenty-ninth had been in England eight months, training for D-Day. The major components were the 115th, 116th, and 175th Infantry Regiments, plus four field artillery battalions, three tank battalions, and three tank destroyer battalions. On D-Day the 116th was attached to the First Division, sustaining serious casualties in the surf from German fire along the bluffs.

Following the 116th, most of the 29th Infantry Division was ashore by that night. In the next few days the 115th advanced to the River Aure at Longueville, while the 175th liberated Isigny.

The Blues and Grays played a major role in seizing Saint Lo, an important road junction, on 18 July. The division was heavily involved in the breakout from Normandy and the campaign through Brittany, culminating in the seizure of the vital port of Brest. From there the ‘‘29ers’’ fought through Holland and finished the war at Hanover, well east of the Rhine. In eleven months of combat the Twenty-Ninth had sustained 20,300 casualties (4,780 dead), fourth highest among all U.S. Army formations.