The following article on amphibious warfare is an excerpt from Barrett Tillman’ D-Day Encyclopedia. It is available for order now from Amazon and Barnes & Noble.

Amphibious warfare involves the movement of troops from sea to shore, and it takes many forms. With the development of airborne capability, Winston Churchill coined the phrase ‘‘triphibious warfare’’ to cover the integration of sea, land, and air forces, such as occurred on D-Day.

However, amphibious operations are almost as old as recorded history. The British Isles had a long familiarity with amphibious maneuvers, extending back more than a millennium before 1944; the Vikings understood the concept perfectly, executing raids from their longships well before William the Conqueror crossed the English Channel to seize England in 1066.

In the late nineteenth to early twentieth centuries, both Britain and America conducted amphibious operations, with varying degrees of success.

U.S. forces were transported to Cuba during the brief war with Spain in 1898, and Britain’s unchallenged sea power enabled her to deliver armies anywhere on the globe, including India and South Africa. However, none of those operations was a true amphibious invasion, as D-Day students understand the concept, because these earlier landings were unopposed. A sterner test occurred in the Dardanelles in 1915, when British and Commonwealth troops assaulted Turkish positions at Gallipoli, resulting ultimately in a costly withdrawal.

During the 1920s and 1930s, the U.S. Marine Corps, amphibious by its very nature, carefully studied the problems of modern seaborne assault. The marines developed a workable doctrine and laid the groundwork for equipment and techniques, though as of 1941 neither they nor the U.S. Navy had anything comparable to the Higgins Boat, which was developed by private enterprise. 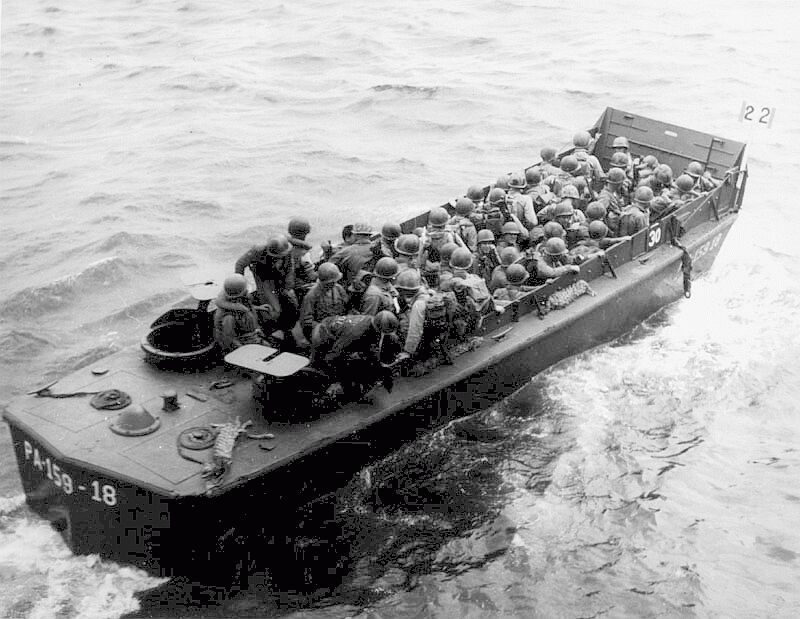 Axis Powers proved adept at amphibious operations in 1940–42, as Germany overwhelmed Norway while the Japanese conquered the Philippines and Malaya. Major Allied amphibious campaigns were conducted from 1942 onward, beginning with U.S. Marine Corps landings in the Solomon Islands and the Anglo-American invasion of French Morocco. American and British forces captured Sicily in 1943 and forced their way across beaches at Salerno and Anzio, Italy.

The U.S. Marines remained the world’s leading practitioners of amphibious warfare, with an unbroken string of successes in the Central Pacific during 1943–44. However, the five (later six) marine divisions were fully committed against Japan and none were available for Europe, even had the

U.S. Army’s generals been inclined to accept the ‘‘Leathernecks,’’ with whom a bitter rivalry dated from 1918. But based on North African and Mediterranean experience, Gen. Dwight Eisenhower’s joint command felt confident in achieving a successful lodgment on the French coast.

The factors involved in Neptune-Overlord were no different than any recent triphibious operation, except for one aspect—scale. D-Day was the greatest undertaking of its kind outside the Pacific theater, exceeded even there only by the Okinawa operation in 1945. But all the elements were in place: reconnaissance and intelligence, beach selection, deception, training, landing craft, airpower, naval gunfire, and command and control. In that respect, the army proved it could rival the marines in ‘‘forcing a lodgment upon a hostile shore.’’

This article on amphibious warfare is from the book D-Day Encyclopedia, © 2014 by Barrett Tillman. Please use this data for any reference citations. To order this book, please visit its online sales page at Amazon or Barnes & Noble.