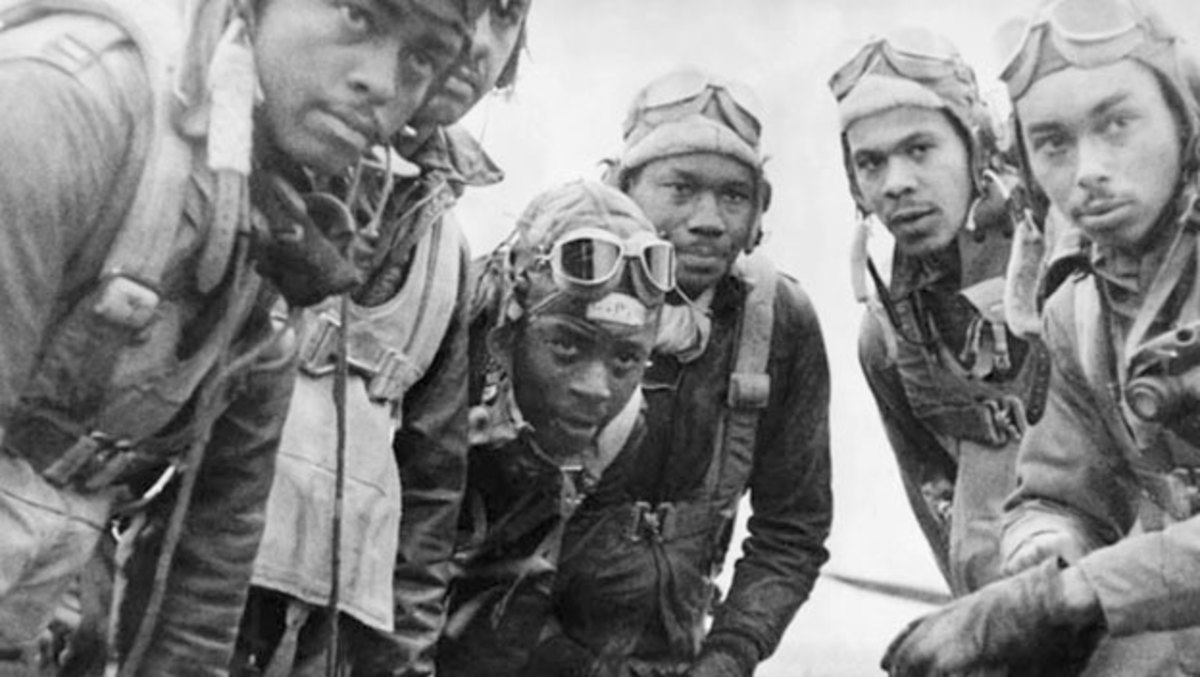 The experience of black pilots in WW2 is the convergence of the long civil rights struggles of racial minorities in the United States and the national military’s grappling with how to integrate these groups into the armed forces, specifically the Army Air Corps, in the twentieth century. This article will look at the events that led to the presences of hundreds of black pilots in WW2.

On the morning of May 8, 1939, a rickety red-and-cream Lincoln-Page biplane, propitiously yet incongruously nicknamed Old Faithful, rose from Chicago’s Harlem Airport on a mission to change the world. The sendoff was hopeful, even joyous. The biplane’s two African American pilots, Chauncey Edward Spencer and Dale Lawrence White, brimmed with high expectations, too rapt by the audacity of their project to entertain its probable limits.

Both Chauncey and Dale belonged to a fledgling group of flying enthusiasts who, despite stinging drawbacks, held to the notion that aviation was the means to an emancipatory realm. The members of the mostly black National Airmen’s Association of America and its precursor, the Challenger Air Pilots Association, saw the sky as a medium inherently devoid of the artificial barriers erected by one class of men to block another. In the air, their thinking held, the law is fair and inviolable; it applies uniformly without exception to all people regardless of extraneous factors like race, color, creed, gender, ethnicity, ancestry, and national origin for it is not man’s law but nature’s law.

The sky as a metaphor for freedom was not a new idea. Mythology, poetry, and liturgy had long propounded the kingdom where the birds sing as an idyllic oasis, a place of unfettered freedom, where the enslaved could escape oppression and the soul could find fulfillment. Up high enough and you were in heaven, utopia, the Elysium.

For dreamers the airplane was the symbol of ascension come true, the real-life “sweet chariot” in the melodic Negro spiritual that serenaded congregations at Sunday services with the promise of “coming for to carry me Home.” Chauncey and Dale, riding on the momentum of their supporters, believed that flight portended great things, not just entry into the previously denied domain of the open air but fruition, wholeness, equality. If only the gateway, the staircase to this near but distant nirvana, could be pried open, all the way open – for everybody.

The Spencer-White flight, formally known as the Goodwill Flight, set out to demonstrate that blacks could fly as well as their white counterparts, if given a chance. With the government about to roll out the Civilian Pilot Training Program to prevent a pilot shortage in case of war, blacks did not want to be left out. And if barriers were going to be shattered, why not the one prohibiting blacks from flying the hottest planes of all – those of the Army Air Corps. The point was that aviation, already well out of its infancy and maturing now into a big and enduring enterprise, ought not to be tainted by the follies enforced with unwavering certitude in every other part of daily life for African Americans.

The flight plan, such as it was, called for the biplane to wend its way to Washington, D.C. Several stops along the way would serve as warm-ups to the triumphal arrival in the nation’s capital. Within the black community the flight represented a unifying force, a cause to trumpet. Backing came from the black press starting with a powerful endorsement from the hometown newspaper, the Chicago Defender, whose city editor, Enoch P. Waters, Jr., knew the key members of the NAAA and had championed the idea of a flight to Washington at one of their meetings.

Chauncey and Dale were breaking new ground, going where black pilots hadn’t trodden before. Yes, as chronicled by historian Von Hardesty, there had been other famous long-distance flights by African Americans, like the 1932 transcontinental flight of James Herman Banning and Thomas Cox Allen and the 1934 Caribbean island-hopping flight of Charles Alfred Anderson and Albert Forsythe, but here the pilots’ destination was the seat of government, the center of political power. Moreover, this would not be symbolism alone; if the flight unfolded as contemplated, the pilots would roam the halls of Congress to plead their case with any lawmaker willing to lend an ear.

Because the white press reported nary a word on the Goodwill Flight, the flyers’ progress was known only to African Americans who read black newspapers or who were in touch by word of mouth with those who did. News of each waypoint reached, each leg completed infused blacks who were paying attention with feelings of pride, hope, and inspiration. As the biplane plodded ahead ever so determinedly, its followers were moved to prayer for the two Chicago pilots, frontiersmen on the cusp of a new destiny.

The fact that the flight was underway constituted a near miracle. It almost never happened for the costs of the aircraft rental, fuel, lodging, meals, and assorted other costs that included custom khaki flight suits were considerable by Depression-era standards. To help finance the flight, Chauncey’s father, Edward, reportedly took out a small loan and forwarded the monies to his son, but the amount represented less than half the projected budget.

Chauncey discussed the lack of funds with a friend and became so worked up that he broke down and cried, much as he had as a youth when denied flying lessons back home in Lynchburg, Virginia. The sight of the usually self-assured flyer with tears streaming down his cheeks over the prospect of not being able to fly to Washington was too much for his friend to bear. She directed him to the Jones brothers, black businessmen in Chicago whose varied interests were said to include the city’s numbers racket.

By the time Chauncey had finished his solicitation, even the hardened entrepreneurs of the city’s South Side were unable to resist. The Joneses chipped in $1,000. According to Janet Harmon Bragg, a licensed pilot and enthusiastic supporter of the planned flight, members of the NAAA “drained their pockets” to make up the rest of the budget.

While money was tight, Chauncey had an inexhaustible supply of gumption, the moxie to believe that the status quo could be overturned, which was the other indispensable ingredient to make the flight happen. Chauncey’s belief that conventions could come tumbling down like the walls of Jericho was planted by his brilliant, compassionate, and tenacious mother, Anne. A school librarian, Anne was also the founder of the Lynchburg NAACP chapter and spent many waking hours laboring for equal rights.

Importantly, she had developed close relationships with the leading lights of the Harlem Renaissance and, writing in a room of her Lynchburg home that overlooked her meticulous flower garden, she had emerged as a respected poet with her verse first published in the NAACP’s magazine, The Crisis, in February 1920. Leading black poetry anthologies edited by Countee Cullen and other distinguished literary figures of the Harlem Renaissance subsequently included her poems. Anne’s parlor became a magnet for black intellectuals, entertainers, and activists like James Weldon Johnson, Langston Hughes, W.E.B. DuBois, Zora Neale Hurston, George Washington Carver, Marian Anderson, Paul Robeson, Thurgood Marshall, and, later on, Martin Luther King, Jr.

The Spencer home’s guest list was a veritable who’s who of the African American cutting edge, the race’s leaders forging change in the larger society. Growing up in the company of these visiting luminaries, Chauncey felt the power of the movements for expression, self-determination, and dignity. With his passion for flight kindled by a barnstormer passing overhead in his youth, he was primed to make his own contribution to the cause of freedom in the arena of the sky.

In the first year of America’s involvement in World War II, blacks experienced little to assuage their concerns about the Army’s racial policies. On January 15, 1943, Secretary Stimson’s first civilian advisor on Negro affairs was so frustrated by the Army’s slow-to-change treatment of blacks and the delay in deploying the new all-black fighter squadron that he quit. The decision by William H. Hastie, Jr., a Harvard Law graduate, former federal judge and dean of the Howard University Law School, prompted the Army to finally commit to send the 99th Fighter Squadron into combat.

Nine months after Hastie’s departure, the commander of the squadron was now having to defend his pilots’ in-theater performance. Benjamin Davis, Jr. was the public face of the black pilots. As the senior black officer in the Army Air Forces, he carried a greater share of the weight in the fight for the so-called Double V: the hoped-for dual victories in the contemporaneous wars against totalitarianism abroad and racism at home.

It was a marathon that required fighting individual battles one at a time. Davis literally alternated between the battlefields of Sicily and the internecine skirmishes within the War Department, having recently left command of the 99th in the capable hands of his deputy, Major George S. “Spanky” Roberts, while he returned to the states for his next assignment. The load on his shoulders was immeasurable, but if anyone could stand up to the likes of McCloy and reverse coldhearted governmental inertia it was Davis for he embodied exactly the right combination of strengths including intellect, courage, perseverance, poise, moral rectitude, and an old-fashioned style of charisma that did not necessarily play well on camera but that in-person could be mesmerizing, as if he could will things to happen.

With the first graduating class of the Tuskegee airmen, the graduating cadets were called to the front individually and presented with the Army’s coveted silver wings and a scroll acknowledging one’s new rank. When his name was called, Harry stepped forward as a member of Tuskegee’s class 44-F. With a handshake and a salute, he was commissioned a second lieutenant in the Army Air Forces. He was still only 19 years old and not yet licensed to drive a car.

Years later, when asked what it was like to be one of the relative handful of cadets to break the Army Air Forces’ color barrier, Harry said in his self-effacing way that he was too busy enjoying the flying to know that he had made history. He was one of 992 African Americans instated into the Army’s flying officer corps during World War II.

With the presence of black pilots in WW2, the skies would never be the same again. 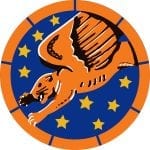