British Blockade of Germany in WW1

History » World War One » British Blockade of Germany in WW1 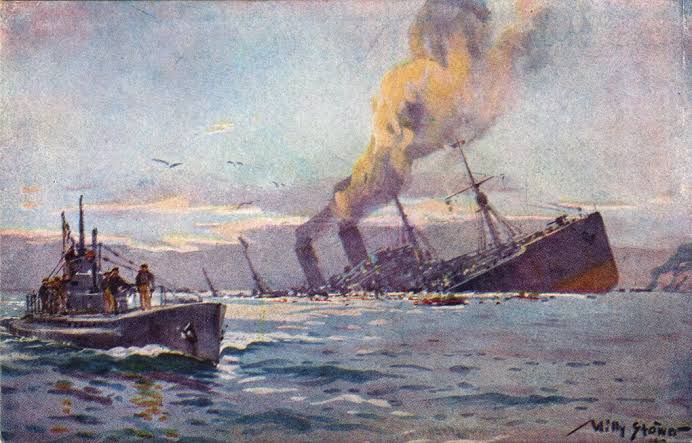 The British Blockade of Germany, or the Blockade of Europe, occurred from 1914 to 1919. It led to Germany declaring waters surrounding Britain to be a war zone, which led to the sinking of a US vessel and the entrance of the United States into the War.

While a so-called close blockade, where a belligerent stopped traffic with its enemy’s ports by stationing ships within a three-mile limit, was considered legitimate, a distant blockade of the kind in which Britain was engaged was not. In a distant blockade, one side simply declares whole areas of the seas to be off-limits. In this case, the British mined the North Sea so that even neutral ships would travel in peril. So while an opposing force had the right to search ships carrying cargo to its enemy, British mines indiscriminately destroyed anything with which they came into contact. “By sowing mines in international waters,” historian John Coogan explains, “Britain deliberately replaced the belligerent right of visit and search in the North Sea with a new rule: explode and sink.”

Moreover, food intended for civilian use was not considered contraband by anyone—except Britain. But given the relatively mild international response to Britain’s conduct, the British government concluded that “the neutral powers seem to satisfy themselves with theoretical protest.” It was in that spirit that the Germans expected their submarine policy to be accepted as well—but in the case of President Wilson at least, they were in for a surprise.

On February 4, 1915, the German government announced that it would retaliate against the illegal British blockade:

All the waters surrounding Great Britain and Ireland, including the whole of the English Channel, are hereby declared to be a war zone. From February 18 onwards every enemy merchant vessel found within this war zone will be destroyed without it always being possible to avoid danger to the crews and passengers. Neutral ships will also be exposed to danger in the war zone, as, in view of the misuse of neutral flags ordered on January 31 by the British Government, and owing to unforeseen incidents to which naval warfare is liable, it is impossible to avoid attacks being made on neutral ships in mistake for those of the enemy.

The reference to “the misuse of neutral flags” recalled the occasional British practice of decorating their ships with the flags of neutral countries to shield them from attack. By early 1915 Churchill was encouraging such a policy, and crews were being urged to don civilian clothing in order to lure German subs to the surface—where they would then be destroyed. For that reason, and because of the general danger that always exists during wartime, even neutral ships could not be assured of their safety when traveling through the war zone. Thus both the British and, in retaliation, the Germans, were guilty of violating the rights of neutral nations.

By January 1917 the German situation was becoming more and more difficult, with the starvation blockade taking a terrible toll on civilians. The German military managed to persuade the civilian leadership that it was necessary to engage in unrestricted submarine warfare, even if it meant war with the United States. They believed that Germany could sink enough enemy shipping that the war would be won by the time the Americans could send an expeditionary force to Europe.

Not surprisingly, fewer and fewer American ship captains dared venture into the war zone, not wanting to be sunk by a German submarine. Now for those historians who, out of a misplaced devotion to Wilson’s memory, try to claim that the president was a lover of peace who desperately tried to avoid American involvement in the war, it is difficult to account for what Wilson did next. Breaking with all previous American tradition, the president called for arming merchant ships with U.S. Navy guns and staffing them with Navy crews, and instructing them to fire on any surfacing submarine they encountered. Bearing such instructions, American merchant ships headed for the war zone. Four of them had been sunk by the time Wilson requested a declaration of war from Congress in April.