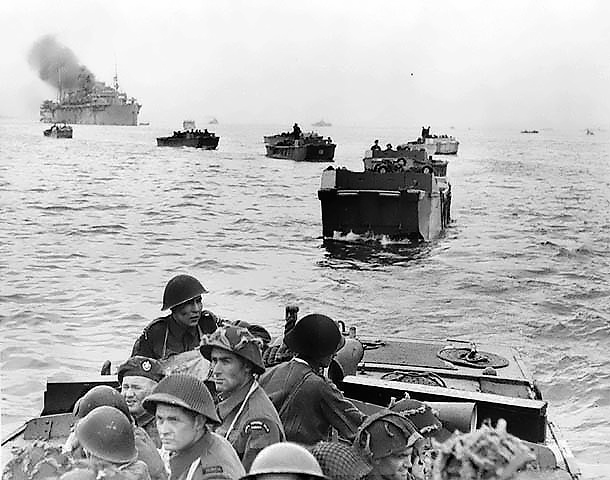 The following article on D-Day commanders who were ashore at the Invasion of Normandy is an excerpt from Barrett Tillman’ D-Day Encyclopedia. It is available for order now from Amazon and Barnes & Noble.

Born of Irish immigrants in New Orleans, ‘‘Lightning Joe’’ Collins distinguished himself in combat against Japan and Germany as a division and corps commander. He graduated from West Point in 1917, finishing in the upper quarter of his class. Having missed combat in the First World War, he served in occupation duty in Germany after the armistice and later came to the attention of George C. Marshall. Promoted to brigadier general in February 1942, he formed the Twenty-fifth Infantry Division in Hawaii and led the ‘‘Tropic Lightning’’ on Guadalcanal and New Georgia in the Solomon Islands.

Reportedly Gen. Douglas MacArthur considered the forty-seven-year-old Collins too young for corps command, so ‘‘Lightning Joe’’ was transferred to Europe. In February 1944 he assumed command of VII Corps, comprising the Fourth, Ninth, and Seventy-ninth Infantry Divisions. On D-Day he took lead elements of his command ashore at Utah Beach and proceeded into the breakout from the Normandy lodgment. His aggressive style endeared him to Field Marshal Bernard Montgomery, who often criticized American generals for a cautious approach. Collins advocated moving as fast as possible and absorbing casualties in achieving his objectives rather than risking a 1917-style war of attrition, with a higher death toll.

Under Collins’s leadership VII Corps contributed to closing the Falaise Gap and advanced to Aachen, the first important German city captured by the Allies. During the setback in the Battle of the Bulge that December, Collins counterattacked and restored Allied momentum by returning to Aachen and continuing to the Rhine in early 1945. In another enveloping maneuver, Collins’s forces encircled the Ruhr pocket and met Soviet troops at the Elbe River in April. That month he received his third star.

Following VE-Day Lt. Gen. Collins was back in the United States, preparing for the invasion of Japan; he was there when Tokyo capitulated. He was the Army Director of Information from 1945 to 1947 and became assistant chief of staff. Promoted to full general, he served as army chief of staff from 1949 to 1953. Over the next three years he represented the United States in NATO Headquarters and was de facto ambassador to South Vietnam. Collins retired in 1956, having served thirty-nine years in uniform.

Like his father, Gerhardt pursued a career as an army officer, graduating in the West Point class of 1917. Commissioned a cavalry officer, he first served in Texas but shortly went to France on the staff of the Eighty-ninth Infantry Division, remaining through the Saint-Mihiel and Meuse-Argonne operations.

At the time of Pearl Harbor, Gerhardt, still a dedicated horse soldier, led a cavalry brigade. However, his leadership talents were needed elsewhere. Gerhardt assumed command of the Ninety-first Infantry Division at Camp White, Oregon, in 1942 and soon made an impression on the new soldiers. He rode a white horse with a pistol perennially on his hip, often shirtless in preparation for expected North African combat.

In July 1943, when Maj. Gen. Leonard T. Gerow was promoted to corps command, Gerhardt took over the Twenty-ninth Division. His ebullient leadership style earned him the nickname ‘‘Uncle Charlie’’ from the troops, who were accustomed to seeing him with his dog, ‘‘D-Day.’’ An advocate of Pattonesque discipline, Gerhardt instituted strict soldiering with aggressive leadership, especially at the battalion level; his methods largely cleared out the division’s guardhouse. He was responsible for the famous (some would say notorious) policy requiring helmet straps to be fastened at all times.

Gerhardt went ashore ahead of his headquarters on the evening of D-Day, consulting with Brig. Gen. Norman Cota, his second in command. They deployed the Twenty-ninth for advance inland when the division was brought ashore on the seventh. Two days later Gerhardt’s troops linked up with Fourth Division units from Utah Beach. ‘‘Uncle Charlie’’ retained command of the Twenty-ninth for the rest of the European campaign.

Gerhardt’s major postwar position was military attaché to Brazil. He retired in Florida, where he died at age eighty-one. He was buried in Arlington National Cemetery in Washington, D.C.

Simon Christopher Joseph Fraser, seventeenth Lord Lovat, was one of Britain’s premier commando leaders of the war. It was said that he descended from a line of Celtic warriors ‘‘who had fought in every major war for a thousand years and filled in the gaps with private wars of their own.’’

Known as ‘‘Shimi’’—from Shimidh, Gaelic for Simon—Fraser had a family and nearly two hundred thousand acres in Scotland but gave no thought to sitting out the war there. Once in the commandos he organized a training center, where his men stalked deer, ate grass, and shot at one another for realism. (‘‘A few men died but many more were saved in the long run.’’)

Lovat’s commandos bloodied their daggers in Norway in 1941 and soon earned a reputation for stealth, violence, and daring. By the summer of 1942 Lovat was a lieutenant colonel commanding 4 Commando in the Dieppe raid. His men captured an artillery battery in a bayonet charge; a few days later he addressed his colleagues in the House of Lords.

On D-Day Brigadier Lovat took his 2,500 men ashore at Sword Beach, one of the five D-Day beaches, wading through the surf with his personal piper, Private Bill Millin, playing ‘‘The Lovat March.’’ The First Special Service Brigade relieved the Sixth Airborne (See British Army) troops at Ouistreham, then formed up and marched across the bridge under direct German gunfire, ignoring the casualties incurred on the way.

By D+6 four of Lovat’s five subordinates had been killed or wounded. Lovat was preparing to hand over his operating area to the Fifty-first Highland Division when a German shell exploded nearby. He was struck down with fragments through the back and stomach, and a priest administered the last rites. However, a lifetime of hard work and exercise had given Lovat an iron constitution. That, combined with a transfusion and penicillin, pulled him through, and he survived to become Winston Churchill’s personal emissary to Joseph Stalin. Lovat received the Distinguished Service Order, the Military Cross, and two French decorations.

Peter Lawford played Lovat in The Longest Day. In the film Lawford carries a Mannlicher hunting rifle, but on 6 June Lovat actually carried a Colt pistol.

A prewar soldier and policeman, Major Howard commanded the British airborne force that seized strategic bridges leading to the eastern landing beaches. Shortly past midnight, 6 June, he led 180 men of D Company, Second Oxfordshire and Buckinghamshire Light Infantry, in six Horsa gliders, which landed within yards of the Caen Canal and Orne River bridges. The surprise and violence of the ‘‘Ox and Bucks’’ attack not only secured the bridges but limited British casualties to two killed and fourteen wounded. Reinforced with British ‘‘paras,’’ the airborne soldiers held the bridges until relieved by Lord Lovat’s commandos later in the day.

Howard’s achievement was immediately recognized with the Distinguished Service Order on 16 July. Wounded twice during the summer, he was more seriously injured in a vehicle accident that November, being hospitalized for four months. After the war he worked for various government agencies.

Richard Todd played Howard in The Longest Day. It was a convincing performance, and small wonder—Lieutenant Todd had been a junior officer in the British Seventh Parachute Battalion on D-Day.

This article on D-Day commanders is from the book D-Day Encyclopedia, © 2014 by Barrett Tillman. Please use this data for any reference citations. To order this book, please visit its online sales page at Amazon or Barnes & Noble.