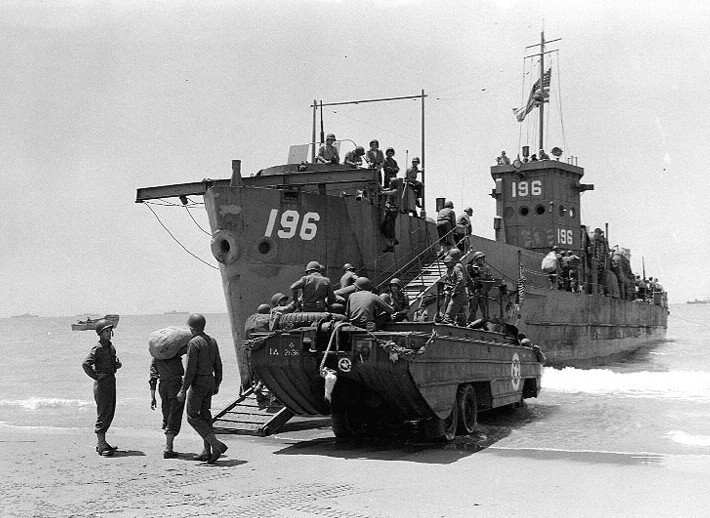 The following article on D-Day landing ships is an excerpt from Barrett Tillman’ D-Day Encyclopedia. It is available for order now from Amazon and Barnes & Noble.

Broadly defined, landing ships are transport vessels large enough to carry troops and heavy equipment to the debarkation area, from where landing craft complete the journey to the beach. D-Day landing ships were often accompanied by air support to protect exposed soldiers. The Allied navies generally considered a seagoing vessel longer than two hundred feet to be a landing ship, though some, such as LSTs and LCIs, did in fact debark directly onto shore without the need to offload troops or supplies into landing craft.

The U.S. Navy committed a wide variety of AKAs to combat in World War II, carrying supplies and equipment to support the assault troops in their APAs. These D-Day landing ships ran from four to seven thousand tons displacement, steaming at fifteen to seventeen knots. They carried some of the same types of landing craft as APAs, most notably LCVPs.

Based on U.S. Maritime Commission cargo designs, APAs were intended to deliver an infantry regiment to the waters off a hostile beach, where its assault craft would be lowered and deploy. More APAs of the Haskell (APA 117) class were built than any other variety, with 116 derived from the famous Victory ship design. By the end of 1944 the U.S. Navy listed some eighty-five APAs, including those still being built by the Maritime Commission. One, the Susan B. Anthony (APA 72), was lost to German mines on D+1.

Essentially a seagoing dry dock, the LSD was the largest amphibious assault vessel of World War II. LSDs could be flooded at the stern to permit landing craft to deploy directly into the water—as many as three LCTs, fourteen LCMs, or some forty LVTs or DUKWs. LSDs were first commissioned in 1943, displacing 4,500 tons light load, 458 feet long, with a 72-foot beam.

They were rated at fifteen knots. Three LSDs were involved in Overlord.

The standard British amphibious support ship, much like the U.S. Navy’s APA, were capable of carrying troops and equipment for disembarking into landing craft. Forty-five LSIs were assigned to the Normandy operation in four versions, (H), (L), (M), and (S).

During planning for Overlord, British prime minister Winston Churchill confided to his diary, ‘‘The destinies of two great empires [are] seemingly tied up in some god damned things called LSTs.’’ The large, oceangoing vessels featured flat bottoms and twin bow doors, which, as in the smaller LSMs, permitted direct delivery of heavy vehicles to the invasion beach. Trucks, tanks, and other vehicles were carried in the so-called tank deck, while smaller landing craft could be carried on the top deck. Occasionally one LCT was carried on deck for offloading at the destination. LSTs displaced 1,490 to 1,650 tons light and 3,300 to 3,700 tons loaded, measuring 328 feet long with fifty-foot beams. They were rated at ten knots, prompting LST sailors to joke that they rode ‘‘Large, Slow Targets.’’ Two U.S. Navy LSTs were sunk in Operation Tiger and five more off Normandy during Overlord.

Apart from delivering troops and equipment to the D-Day beaches, LSTs also were used as frontline hospital ships, evacuating casualties directly to England.

Following seizure of the beaches, 236 LSTs brought heavy equipment ashore, including badly needed tanks. Thus, Overlord used almost two-thirds of all LSTs available to Allied fleet units worldwide, excluding ninetyodd recently completed on the U.S. East Coast. Only twenty-four were on hand in the Mediterranean (all but two crewed by Americans), while the U.S. Pacific Fleet deployed 102 for operations against the Japanese.

This article on D-Day landing ships is from the book D-Day Encyclopedia, © 2014 by Barrett Tillman. Please use this data for any reference citations. To order this book, please visit its online sales page at Amazon or Barnes & Noble.