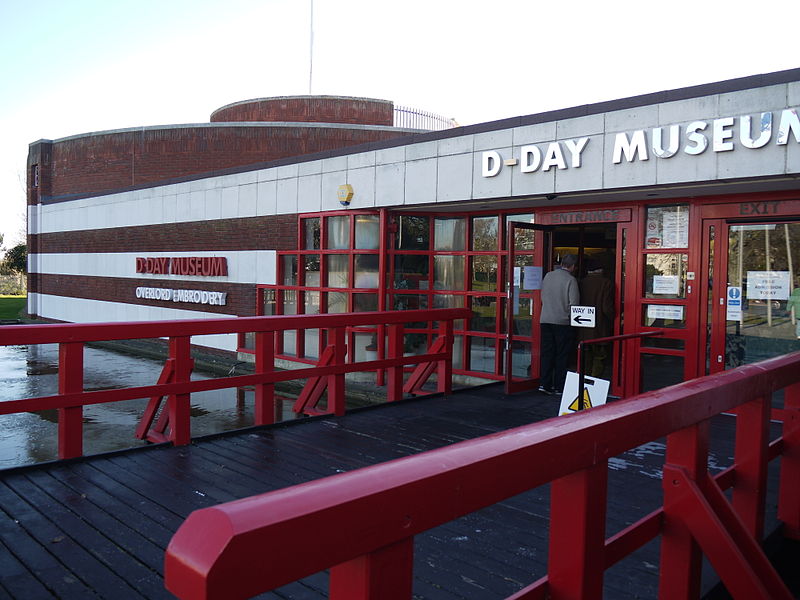 The following article on D-Day museums is an excerpt from Barrett Tillman’ D-Day Encyclopedia. It is available for order now from Amazon and Barnes & Noble.

Numerous D-Day museums in the United States and Europe are directly or indirectly related to documenting, and educating future generations about, D-Day and the Normandy campaign. Many D-Day museums smaller than those cited following are open during the tourist season in Normandy and northern France. In addition to the venues shown following, D-Day displays are periodically placed in the U.S. Military Academy Museum at West Point, New York, and the National Museum of the Pacific War in Fredericksburg, Texas.

Opened at Ouistreham, France, in 1988, the museum features a concrete observation post and fire control tower, restored to 1944 condition with appropriate German equipment. It is open daily most of the year.

Bayeux was the first French city liberated from German occupation, and the Battle of Normandy Museum honors the events of 6 June 1944 as well as the subsequent campaign in northern France.

Located in a Romanesque chapel, the museum tells the story of the British Fiftieth Division fighting in and around Tilly-sur-Seulles. It is open daily in July and August, on weekends in September.

Benouville’s famous Pegasus Bridge is an apt setting for this memorial to the British airborne forces in World War II. Besides uniforms, badges, and weapons, the facility also contains sound and light shows to amplify the exhibits.

Located at Arromanches (as is the Second World War Museum), the D-Day Museum overlooks the site of one of the Mulberry artificial harbors. The displays emphasize the Mulberries’ contribution to Operation Overlord by use of models, animation, and slide presentations.

Located in Falaise itself, this museum describes the Allied breakout from the Normandy beachhead. Exhibits include vehicles and artillery. It is open daily from June through August but is closed Mondays and Tuesdays in March, April, May, September, October, and November.

Caen’s multifaceted peace memorial traces the path of violence during the twentieth century. Leading from World War I to World War II, various exhibits include photos, films, and artifacts including military vehicles. There is also a Gallery of Nobel Prize recipients who have been honored for their humanitarian efforts or contributions to peace.

Of particular interest to D-Day students are the U.S. Armed Forces Memorial Garden and segments of three motion pictures, including The Longest Day. Additionally, tours of the invasion beaches may be arranged. The Caen Memorial for Peace was dedicated on 6 June 1988 and draws 420,000 visitors per year. World War II veterans are admitted free, while entrance fees are twenty francs for other veterans and sixty-three francs (9.60 euros) for general visitors. It is open June through August.

Dedicated in 1982, Merville’s D-Day heritage is preserved via models and exhibits relating to capture of the German artillery battery on D-Day. It is open June through August, except Tuesdays.

This large (thousand-square meter) museum at Carentan includes mannequins and numerous visual displays but boasts that it is Europe’s only military museum without weapons. It is open daily from mid-June to mid-September and on weekends during March, April, and October.

Cherbourg’s museum primarily addresses the factors leading to the liberation of Normandy and subsequently all of France in 1944–45. Exhibits include tributes to Free French, American, British, and other Allied contributions to the end of four years of Nazi rule. Reportedly exhibits have declined over the years owing to six burglaries since the mid-1950s.

Bedford, Virginia, lost proportionately more men on D-Day than any other American community. On 6 June this town of 3,200 citizens had thirty-six men ashore, of whom nineteen were killed plus another four in later Normandy fighting. They were National Guard members of Company A, 116th Infantry, Twenty-ninth Infantry Division, on Omaha Beach.

To honor Bedford’s sacrifice, the National D-Day Memorial was dedicated in 2001. The nine-acre memorial includes a variety of sculptures depicting GIs emerging from the surf, onto the beach, and scaling the wall.

Dedicated on 6 June 2000 as the D-Day Museum, the facility was aptly placed in New Orleans, Louisiana, home of the Higgins Boat. The project was authorized by the U.S. Congress in 1992, and funds were provided for construction on the site of a Higgins factory, though the actual facility was built elsewhere. The museum contains artifacts, weapons, uniforms, photo galleries, and interactive displays for educational purposes. It became the

Ouistreham’s Boulevard de 6 Juin near Riva Bella Beach is the locale of this small, private museum. Displays include weapons and memorabilia of the First Special Service Brigade, which included the French No. 4 Commando. One of the most unusual exhibits is a German Goliath radiocontrolled tank. Personal photography is prohibited. The museum is open from June to mid-September.

Set in a Nissen hut in Vierville-sur-Mer, this display focuses on the U.S. landings at Omaha Beach. It is open from Easter through September.

Appropriately located at Sainte-Mère-Église, the Parachute Museum opened in 1964. It is a privately operated memorial at the site of one of the Eighty-second Airborne Division’s objectives. Former paratrooper Phil Jutras settled in Sainte-Mère-Église and became director of the museum, which gathers oral histories as well as displaying artifacts. Exhibits include a 439th Troop Carrier Group C-47 Skytrain that dropped paratroopers on D-Day, as well as a Sherman tank. Visitors exit through the fuselage of a CG-4 glider. The museum is open daily from Easter through October and on Sundays in winter.

This tribute to the Second Ranger Battalion, at Grandchamp, includes uniforms, equipment, and photographs recognizing the Rangers’ capture of Pointe-du-Hoc.

Arromanches, also home of the D-Day Museum, was the location of the Allied breakout from the Overlord beachhead. Consequently, the Second World War Museum concentrates on a broader aspect of the Normandy campaign, displaying uniforms and equipment while placing the area in context of events in 1944.

Based on Wiederstandneste 5 (W5), the Sainte Marie du Mont museum includes Sherman and Alligator tanks plus a terrain board depicting the landing sequence by which the U.S. Eighth Infantry Regiment was to come ashore on Utah Beach with the Twenty-ninth Infantry Division.

This article on D-Day museums is from the book D-Day Encyclopedia, © 2014 by Barrett Tillman. Please use this data for any reference citations. To order this book, please visit its online sales page at Amazon or Barnes & Noble.