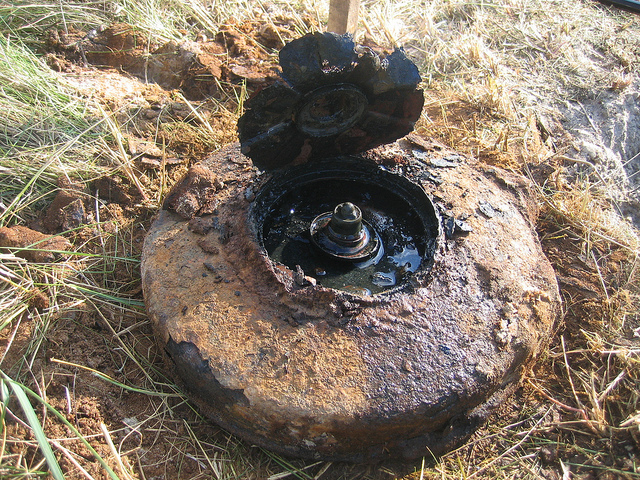 The following article on mines used in D-Day is an excerpt from Barrett Tillman’ D-Day Encyclopedia. It is available for order now from Amazon and Barnes & Noble.

Various mines were placed on the Normandy beaches to impede or destroy Allied tanks, vehicles, and landing craft. Most were detonated by a pressure plate with sensitivity settings that varied with the weight of a man, a truck, or a tank, while others were activated by radio or electric wires. However, few of the 6.5 million land mines deployed were designed for beach use, and large numbers of those were rendered inert by constant exposure to salt water. It is uncertain what percentage actually detonated on D-Day—though many Allied landing craft were destroyed or damaged by mines. In any case, Field Marshal Erwin Rommel did not achieve the mine density he desired before D-Day. He hoped to install eleven million antipersonnel mines alone, plus others intended for use against landing craft and vehicles.

Not all explosives were mines in the true sense. Some devices were more aptly described as ‘‘booby traps,’’ concealed by sand or gravel and detonated by trip wires. Others were command detonated, with electronically activated wires leading to a dugout or bunker. Some plans were never realized, such as mines activated by interruption of a beam of light. Radio-controlled ‘‘mines’’ on tracks were deployed in small numbers but were relatively ineffective.

Antipersonnel mines that when triggered sprang into the air and exploded at waist height were called ‘‘bouncing Betties’’ by American soldiers. The mine was electronically fused to detonate a split second after it was activated, increasing the chances of killing or maiming the victim.

Teller mines were antitank devices that derived their name from the German word for ‘‘plate,’’ after the mine’s flat, circular shape. The first version was T-Mine 35, which appeared in 1935. It was thirteen inches across, about four inches high, and had a charge of 11.4 pounds of TNT. The mine itself was a steel casing insulated against moisture, with a spring-loaded detonation plate to activate the fuse. The entire mine weighed about thirty pounds, and once covered with soil it was, like all land mines, invisible. A force of 350 pounds would detonate it, allowing infantry to pass by but detonate under tanks or other vehicles. The Teller Mine 42 contained ten pounds of Amatol but weighed only seventeen pounds. Its main advantage was that it was simpler and therefore easier to manufacture and handle. It was on Utah Beach: U.S. Army via Martin K.A. Morgan. detonated by 550 pounds of pressure. A 1943 model was designated T-Mine Pilz (mushroom), for the shape of the activating plate. Otherwise it was similar to the T-Mine 42.

Teller mines were widely distributed on the Normandy beaches, usually attached to obstacles, such as poles and tetrahedra. Otherwise, they functioned much as land mines, being activated by sufficient pressure from an Allied landing craft. All Teller mines could be fitted with ‘‘anti-tamper devices,’’ sensitive fuses intended to detonate the mine when it was lifted. German troops were trained to deactivate mines before moving them; Allied engineers learned the same procedures from practical experience.