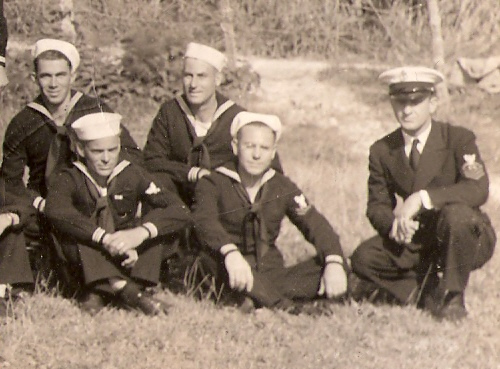 The following article on Seabees of D-Day is an excerpt from Barrett Tillman’ D-Day Encyclopedia. It is available for order now from Amazon and Barnes & Noble.

The Seabees (for CBs—construction battalions) became famous for their busy-bee efforts in every theater of war. Established as part of the U.S. Navy’s rapidly expanding wartime force structure, they were urgently needed to build new facilities and expand existing ones. Their efforts were even dramatized in a 1943 John Wayne film, Fighting Seabees. Though it glorified the Seabees for wartime purposes, the movie accurately portrayed the original CB concept—recruitment of older men (up to age fifty) with civilian construction experience.

Seabees received some combat training but seldom had to defend themselves. However, they were constantly called upon to perform prodigies of work with their innovative methods. In Normandy they built the Mulberry artificial harbors and operated Rhino ferries. Some Seabees voluntarily transferred to naval combat demolition units, while others served as beachmasters.

The main Seabee unit on D-Day was the Twenty-fifth CB Regiment, consisting of the 111th Battalion at Omaha Beach and the Twenty-eighth and Eighty-first at Utah. Elements of other CB units were split between the two American beaches.

Seabee casualties on D-Day were at least two killed and five missing, with more than fifty wounded or sustaining noncombat injuries.

The Seabees of D-Day suffered heavy losses for a non-combat unit. Today the unit continues to provide crucial roles in the navy by rapidly building new facilities and expanding existing ones.

This article on Seabees of D-Day is from the book D-Day Encyclopedia, © 2014 by Barrett Tillman. Please use this data for any reference citations. To order this book, please visit its online sales page at Amazon or Barnes & Noble.