The Falkland Islands And Its First Battle

History » World War One » The Falkland Islands And Its First Battle 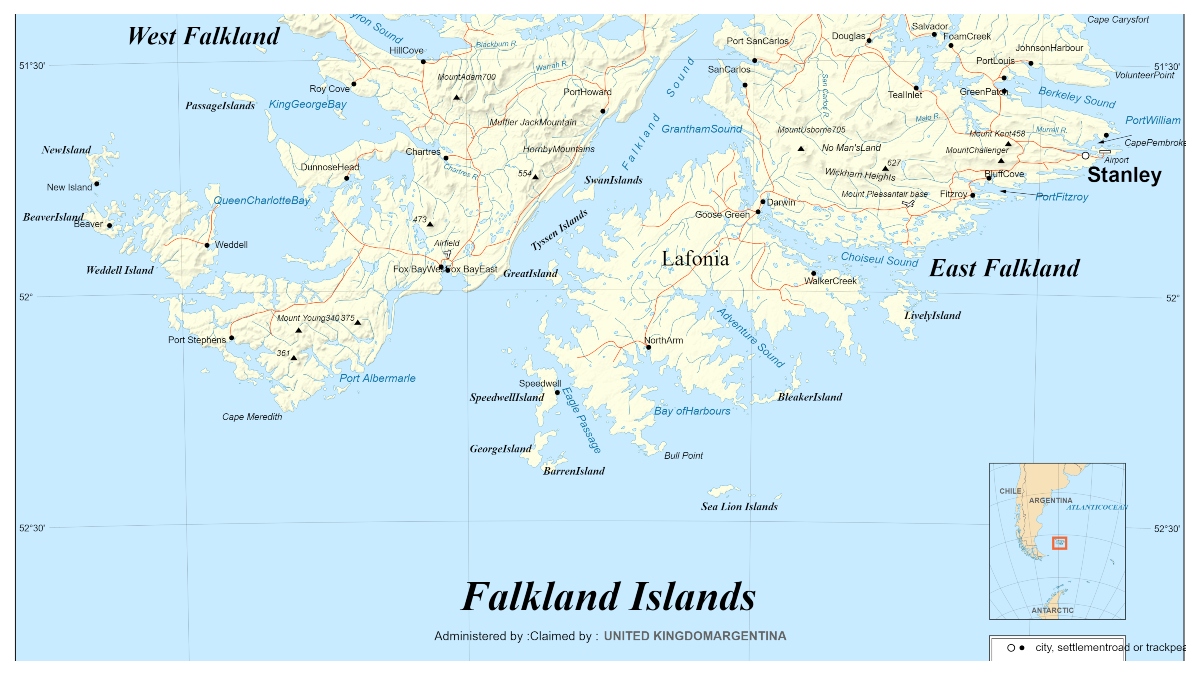 [In 1982, British PM Margaret Thatcher ordered the Royal Navy to re-capture the Falkland Islands from Argentina. It only took them 10 weeks. But then, as contributor Dan McEwen explains, they’d been there once before.]

In 1908, Winston Churchill, then 33 and the youngest minister in the new Liberal government’s cabinet, indignantly dismissed public speculation about the war between Britain and Germany, saying; “These two great peoples have no prize to fight for and have no place to fight in.” By 1914, they’d found a prize – supremacy of the high seas – and a place to fight for it, a full two years before anyone began looking for Jutland on their charts.

Discussions of the causes of WW1 invariably include talking about the Anglo-German naval arms race in the decade prior to the war. This so-called “race” to build Dreadnought-class battleships was over before it began. Britain entered the war with a naval fleet of 600 vessels versus Germany’s 350. The German admiralty stoutly maintained their new fleet was strictly defensive, a necessary deterrent against a British naval blockade. Carl Scheer, the admiral who would lead the German fleet at the Battle of Jutland, insisted there was nothing to see here. “The intention imputed to us of wishing to usurp British world-power never existed… Schemes of conquest were utterly absent from the minds of the German people,” he would write in his memoirs. And indeed, Alfred von Tirpitz Secretary of State of the German Imperial Naval Office anchored his precious fleet in home ports for the duration of the war, content to let his submarines do the dirty work.

Sailors of the Royal Navy on a goodwill visit to the German naval base in Kiel were getting drunk with Kriegsmarine sailors when word of the assassination of Franz Ferdinand in Sarajevo reached them. The news was ignored and everyone went on partying. They didn’t know it yet but the party was over. Within a month they’d be at war.

Furthest from home when the shooting began was Germany’s East Asia Squadron, comprised of the heavy cruisers Scharnhorst and Gneisenau and the three light cruisers, Emden, Nürnberg, and Leipzig. They’d had been policing Germany’s scattered colonial possessions in the Pacific Ocean from a base in Tsingtao China. Now, to get it home, the group’s commander, Admiral Maximilian von Spee knows his small fleet will have to run a 14,000-mile gauntlet of open seas that he imagines is swarming with Royal Navy warships. But the Japanese navy had slammed the door behind him, quickly taking possession of Germany’s colonies. The fleet had nowhere to go but home. Although pessimistic about their chances, Spee headed for the friendly port of Valparaiso, Chile on the west coast of South America.

Unknown to Spee, the Royal Navy had dispatched a handful of aging warships – the armored cruiser Good Hope, the cruiser Suffolk, a lightly armored cruiser Glasgow. Monmouth, a cruiser, and Otranto, a passenger liner converted into an armed merchant cruiser, under the command of Rear-Admiral Sir Christopher Cradock – to track him down. As it turned out, Spee found them first. Cradock’s ships just happened to be moored in the Chilean port of Coronel when at dusk on November 1st, Spee’s squadron arrived. Although they were badly out-classed and out-gunned, Cradock bravely steamed his ships straight at Spee’s ships. The German gunner’s aim was deadly accurate and Scharnhorst ripped Good Hope apart: Gneisenau mortally wounded Monmouth on its second salvo. The two warships sank without survivors. Both damaged, Glasgow and Otranto narrowly escaped into the gloom of the gathering darkness and sent the grim news home to London. It was the first defeat for the Royal Navy in over a century and the Admiralty did not take it well.

Spee’s men were greeted as heroes by Valparaiso’s large German population. Over 300 Iron Cross medals were handed out but their admiral rightly feared they were celebrating too soon. His ships had used up half their ammunition and there were unconfirmed reports of British warships lurking in the South Atlantic. Still, he had no choice but to make a run for it. On December 1st, the fleet of five rounded Cape Horn, stopping at Picton Island to pillage coal from a hapless British collier they’d captured there. The warships were now loaded with enough coal to make a headlong dash for home. However, Spee wanted to take a side trip to Port Stanley in the Falkland Islands and take on more, stealing it from the British coaling station there. The other three captains thought it was a bad idea. The Royal Navy was bound to have its blood up over the defeat at Coronel. Spee revealed he had an intelligence report from HQ in Berlin that Port Stanley was free of British ships. [Only after the war was it revealed that the report was fake news, planted by British intelligence which had broken the German war codes, to lure Spee’s ships into an ambush.]

And what an ambush it was! The battlecruisers Invincible and Inflexible were already steaming south under the command of the Chief of Staff at the Admiralty, Vice-Admiral Doveton Sturdee. These two ships would be joined by the armored cruisers Carnarvon, Cornwall, and Kent, the armed merchant cruiser Macedonia and the light cruisers Bristol and the hastily-repaired Glasgow. The British arrived first and began coaling their ships, boilers fired, crews on alert. On December 8th, the trap was sprung.

Gneisenau and Nürnberg scouting ahead made landfall only to be fired on by a British ship grounded in the harbor as a fixed watchtower. At the sight of the distinctive tripod masts of the British battlecruisers on the horizon, Spee’s heart sank. His few ships were no match for them. He ordered them to turn and make a run for the open sea, knowing it would only be a matter of hours before the bigger, faster British ships overtook them. Indeed, British sailors were told to finish their breakfast before getting underway!

Like hounds to a fox, the Royal Navy gave chase and at 1:00 pm Invincible and Inflexible‘s 12-inch guns opened fire on the Leipzig. Realizing the game was up, like Cradock days earlier, Spee turned to face the British with his armored cruisers, hoping that would give the light cruisers a chance to escape. The eight-inch guns of the Scharnhorst and Gneisenau stuck the two British ships over forty times but both shrugged off the hits. Seeing this, Spee reversed course and steamed off but Invincible and Inflexible soon overtook them. The Scharnhorst was sunk by 4:30, taking von Spee and his entire crew down with her. Gneisenau lasted a few hours longer as the British gunners were blinded by the smoke from their own funnels. Inflexible fired some 600 twelve-inch shells before the Gneisenau finally slipped beneath the waves. Meanwhile, the Kent, her crew pushing its boilers to the limit, caught up with the Nürnberg sinking it in less than an hour. Glasgow and Cornwall had chased down SMS Leipzig, sinking it with only 18 survivors.

In an astonishingly lop-sided battle, the Royal Navy had sunk five German ships, killing 1.871 German sailors without losing a single ship and at a cost of only 10 sailors killed! “Any lingering sense that Germany could pose a threat outside Europe disappeared,” concludes Andrew Lambert, author of The British Way of War.

Lord Fisher, the Baltic and the Battle for British Grand Strategy 1914-1915, Andre Lambert

How Significant Was the Battle of the Falkland Islands? Tristan Hughes